The Brexit process has had its share of surprising twists and turns. But even seasoned observers were taken by surprise recently when the Sun reported: Brexiteers were urging Theresa May to extend the transition period. Experts have long agreed that the transition period currently provided for in the Withdrawal Agreement is unlikely to be long enough to successfully negotiate a broad Free Trade Agreement (read Association Agreement) between the UK and the EU. So is this news evidence that rationality is returning to the Brexit debate? Sadly, no, writes Holger Hestermeyer (King’s College London). Rather, we are witnessing a surreal play – a drama in four acts.

Act 1: The Brexit Process (really more of a dramatic introduction)

It is, at times, useful to remind ourselves where in the Brexit process we actually are. Art. 50 of the TEU, the sparse legal provision on withdrawing from the EU that is now fleshed out in practice for the first time, provides that after the notification of the intention to withdraw “the Union shall negotiate and conclude an agreement” with the withdrawing state “setting out the arrangements for its withdrawal, taking account of the framework for its future relationship with the Union”. The provision gives the partners (in principle) two years to get the agreement in place, after two years the EU Treaties cease to apply to the withdrawing member.

What is to be negotiated in those two years, however, is merely the withdrawal agreement “taking account” of the framework for the future relationship. The agreement on the future relationship between the two partners itself can, as the European Council explains in one of its guidelines, “only be finalised and concluded once the United Kingdom has become a third country”. Where are we in the process? We are currently still negotiating the withdrawal agreement.

The fact that we will only really negotiate the final UK-EU relationship after the UK has already left the EU poses a difficult question: what happens between the time of Brexit and the entry into force of the future relationship? How can the time between the moment that the EU Treaties cease to apply and the future agreement comes into place be bridged?

Several options are, in theory, available. The partners opted for a solution they refer to as a “transition” or “implementation” period. This refers to a set of provisions in the withdrawal agreement (currently Art. 121 et seq.) that, roughly, extend the validity of EU law and the status quo in that respect for the UK for the transition period, but the UK will not be represented in EU institutions. There are quite a few problems with this construction of the transition period. Let’s limit ourselves to one: the agreement currently provides for a transition period until 31 December 2020. The reason is that after this date the next multi-annual financial framework for the EU will begin and both partners want to avoid the mess of involving the UK.

So should we rejoice that this seems to be what some ministers seem to advocate?

Act 3: On customs partnerships and max fac (the drama thickens)

Well. Not really. The reason they seem to want to consider a longer transition period is that the Cabinet is hopelessly divided between two visions of the future customs relationship between UK and EU: a customs partnership favoured by the PM and a max fac proposal favoured by the so-called Brexiters. The Cabinet not only needs time to decide: if it chooses max fac, it also needs time for this option to be put into place. It is in this third act that our drama turns surreal.

The two visions of the future have been neatly summarized in this House of Commons Library Briefing Paper. The Customs Partnership at its core proposes that the UK at its border mirrors EU customs law and thereby virtually becomes an EU border, allowing goods entering the EU via the UK to seamlessly cross the border. Goods intended for the UK market, however, would be subject to UK customs laws. The practical complexity of this proposal is enormous, as it would involve tracking an enormous number of products. But so is the legal complexity, raising issues under both WTO and EU law. Does the requirement to track imported products violate Art. III of the GATT? Would the EU be able to agree to the UK acting as an EU border without being bound by EU customs law, giving it direct effect, supremacy and applying it under supervision by the Court of Justice of the European Union and the Commission? Bear in mind that this would mean that the EU trusts a non-Member State with the collection of resources that are “own resources” more than its own Member States. But max fac has its own problems. This proposal involves streamling customs arrangements and simplifying requirements e.g. through authorised economic operator schemes and technology to facilitate customs processes. “Maximum facilitation” at a border is certainly desirable, but – as the Northern Ireland Affairs Committee of the House of Commons concluded – currently there are no technical (or other) solutions available that make a border invisible, and this is what the UK is committed to in Northern Ireland.

And this is where our drama becomes surreal: the EU has largely rejected both of these proposals, as they would not fix the problem of the Northern Irish border. The Cabinet thus is currently fighting over which of two dead cats will be released into the wild.

Act 4: Why transition will not help (the drama self-destructs)

The reason we cannot rejoice at the request for a longer transition period is that this request seems only to have been made so that max fac can be adopted as a solution – in the hope that during the transition period, the technical solution to border problems will be found. This, however, utterly disregards where we stand in the negotiations.

To end this surreal theatre, we need to go back to the drawing board.

This post represents the views of the author and not those of the Brexit blog, nor the LSE, nor KCL. 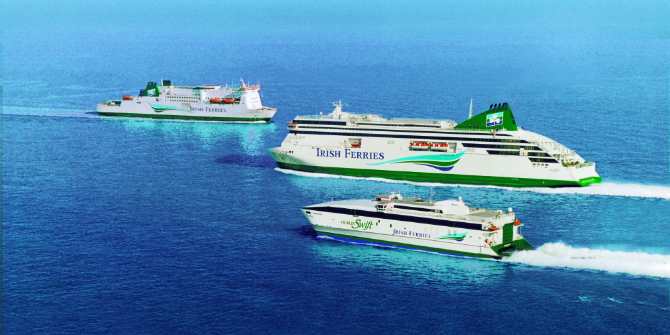