Much media and academic attention on Brexit has understandably focussed on the external dimension: the complex negotiations between the UK and the EU over withdrawal and a future relationship. Roger Awan-Scully (Cardiff University) sheds light on the intra-UK dimension of Brexit with respect to Wales.

A great deal has also concentrated on the difficult internal politics at Westminster – with Theresa May’s government, lacking a parliamentary majority and deeply internally divided, trying to manage probably the hardest task the UK as a state has attempted since World War II.

Somewhat neglected amidst all this has been the inter-governmental, intra-UK dimension. But it is one that has become very important. Brexit was internally divisive within the UK from the start, with two of the four nations having voted Leave and two supporting Remain. Contrary to the Prime Minister’s talk of the ‘country coming together’ over Brexit, those divisions have only grown. 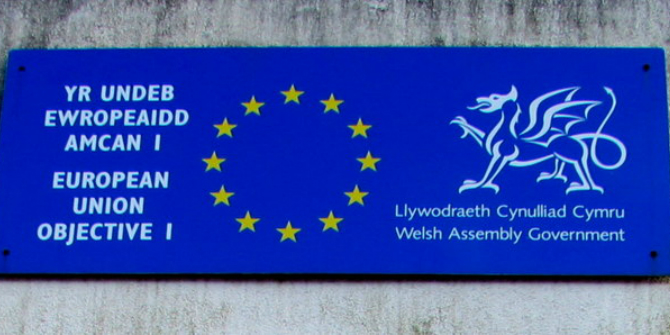 © Copyright Jaggery and licensed for reuse under this Creative Commons Licence.

From the day after the referendum, the Scottish Government voiced concerns at Scotland being forced out of the EU against its will. The Welsh Government has also long been unhappy: although it, unlike its Scottish counterpart, has no mandate to oppose Brexit, it is well aware of the multiple ways in which Wales is economically dependent on EU membership and so has sought the softest Brexit possible. The Welsh Government has also sought to use Brexit as the starting point for a fundamental re-shaping of the UK as a state; while the SNP-led administration in Edinburgh is currently considering a second independence referendum, with Brexit offering them the pretext.

Despite the long history of bitter relations between Labour and the SNP, the Cardiff and Edinburgh governments have often found themselves on the same side over Brexit. Ministers from both governments have publicly castigated the UK government’s handling of Brexit – notably their conduct of the Joint Ministerial Committee through which the UK government is meant to consult formally with its devolved counterparts. And for much of the last year Cardiff and Edinburgh have stood shoulder-to-shoulder in opposition to the devolution provisions in the EU Withdrawal Bill. First Ministers Nicola Sturgeon and Carwyn Jones issued a joint statement opposing it when the bill was first published in July 2017; they reiterated their shared opposition later.

However, this alliance broke down in April. Agreement was reached between the Welsh Government and London on the devolved aspects of the EU Withdrawal Bill. But there remains a stand-off between London and Edinburgh. Moreover, the Scottish Government has been supported in their stance by all the parties at Holyrood except for the Conservatives.

This has left the Labour party in a particularly interesting position. In recent House of Commons select committee testimony, the Scottish Labour leader Richard Leonard said that the Withdrawal Bill remained unacceptable. Yet in a recent major speech in Cardiff, the Welsh minister responsible for Brexit, and likely next First Minister, Mark Drakeford defended the ‘compromise’ he had reached with the UK Government. However, Drakeford was visibly uncomfortable when challenged on the divisions with his Scottish Labour colleagues.

Beneath the specifics of the EU Withdrawal Bill is a broader political context of the differing fates of Labour in Scotland and Wales. Prior to devolution, and for some years afterwards, Labour was dominant in both nations. But it has only remained so in one of them. In Wales Labour has sailed on unchallenged, but in Scotland they have slipped to become only the third party.

Part of this divergence in Labour fortunes has been about the calibre of their opponents: the SNP being much more politically effective than Plaid Cymru, and in recent years the Conservatives having been led much better in Scotland than Wales. But there have also been major differences in how Labour have managed the politics of devolution.

Welsh Labour had a nasty shock in 1999. Led by Alun Michael, who was widely seen as having been imposed on them by Tony Blair, they had a much worse result than expected in the first National Assembly election – with Plaid Cymru being the main beneficiaries. Since 2000, under first Rhodri Morgan and then Carwyn Jones, they have been led in the Assembly from their more ‘Welsh’ and autonomist wing. This approach has not always been universally popular. The 2007 coalition deal with Plaid Cymru was opposed by some, notably former UK party leader Neil Kinnock. In recent months, some Welsh Labour MPs were less than thrilled about their Brexit alliance with SNP. But this approach has persisted because politically it has worked. And in the 2017 general election, when Labour was faced with what initially looked like a very difficult campaign, it turned to heavy Welsh Labour branding, the leadership of Carwyn Jones, and messaging that at times seemed like that of Plaid Cymru, for what was ultimately a very successful defence of the party’s dominant position in Wales.

By contrast, the party that did most to bring a devolved Parliament to Edinburgh, Scottish Labour, became over the following years increasingly perceived as the ‘tribunes of Westminster’. Some have attributed this to Gordon Brown’s controlling influence on the party in his homeland; in part it also reflected the series of weak leaders that the Labour party experienced in Scotland after the tragic death of the inaugural First Minister, Donald Dewar. Then came the 2014 independence referendum – and Labour’s pro-union alliance with the Conservatives that destroyed much of their working-class support. In recent years, Scottish Labour have been caught in a political pincer movement: the resurgent Scottish Conservatives have cornered the market in full-throated unionist opposition to independence, while much of Labour’s former working-class and centre-left support among those at least willing to contemplate independence has moved to the SNP (or even the Scottish Greens.) In Wales, many ‘soft nationalists’ are still inside the Labour tent.

Labour is still a pro-union party in both Wales and Scotland. But what does being pro-union actually mean now? And how do you make that a politically effective position? Being a ‘devolutionist unionist’ has long been a difficult balance to strike; Brexit has hardly made this any easier.

This post represents the views of the author and neither those of the LSE Brexit blog nor of the LSE. It first appeared on the Welsh Brexit blog.

Roger Awan-Scully is Professor of Political Science in Cardiff University’s Wales Governance Centre, based in the School of Law and Politics. He also runs the Elections in Wales blog.