Take a listen to my interview on BBC Radio 4.

This interview was originally posted on Maths@LSE, the blog of LSE’s Department of Mathematics. 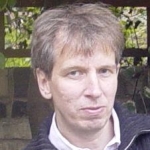