China has an image problem in Africa

Many Africans view Chinese investment in the continent with suspicion, write Mark Esposito and Terence Tse

China has an image problem in Africa

China is swiftly becoming one of the world’s largest investors, especially in Sub-Saharan Africa, with the biggest investments made in Nigeria, Sudan, South Africa and Angola. In 2012 China was estimated to have a total stock of $531 billion in investments abroad, with four percent of it — $22 billion — in Africa. A small sum at first glance, but its economic impact in the region is huge and far-reaching. In addition to investment projects, China is quickly becoming the continent’s main trading partner, with its trading volume reaching $166 billion. This is likely to continue to increase, reaching an estimated $1.7 trillion by 2030.

While more investment and trade could bring enormous economic benefits to the various countries in the region, they are often viewed with suspicion. For many, the ever-increasing number of Chinese companies is destroying their regional counterparts, along with the jobs that they provide. The growing Chinese presence in Africa could have cost South Africa 75,000 jobs in the period between 2000 and 2011. In Nigeria, the influx of low-priced Chinese textile goods has caused 80 percent of Nigerian companies in this industry to close.

In these cases, it is easy to argue that African companies are merely insufficiently competitive. Yet, this could also be the result of Chinese firms bending or even breaking rules and regulations. For instance, at Chinese-run mines in Zambia’s copper belt, employees must work for two years before they get safety helmets. Ventilation below ground is poor and deadly accidents occur almost on a daily basis. In Ghana, Chinese firms have targeted gold mines too small to be of interest to larger companies. Moreover, they have the financial resources to bring in equipment unavailable to small-scale Ghanaian prospectors, and consequently taking away gold mining opportunities from the locals. By law, mining on small plots of 25 acres or less is restricted to Ghanaian nationals. However, many Chinese continue to explore for gold in conjunction with local landowners even though regulations have made it clear that such practice is illegal. The result: many Africans consider themselves exploited. 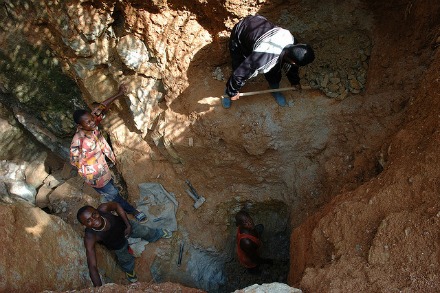 Perhaps making matters worse, the kinds of goods that China trades with African countries have done little to change such perception. Whereas China buys from Africa mainly natural resources — minerals and metals —, African countries have been importing processed goods from China that range from machinery and electrical goods to transportation, plastics and rubber. Such arrangement could benefit both trading parties. Yet, it can easily been interpreted as China continuously exploiting natural resources to feed its need for industrial output. At the same time, by exporting cheap — and often shoddy — manufactured goods to African countries, not only local companies can no longer compete effectively, but their dependency on China’s goods grows.

Recent research has also suggested that the Chinese presence has failed to bring significant skill development, adequate technological transfer or any measurable upgrade to the productivity levels of this part of the world. Small wonder that many Africans say they feel under siege. The sentiments and attitudes toward Chinese influence in Africa were captured when the following question was put to a Chinese journalist by a Kenyan game warden: “How would you feel if we went and killed all your pandas?”

As we speak, the 6th forum on China’s Africa Cooperation (FOCAC), to take place in South Africa on 4 and 5 December, is the centre of attention. This will be the first forum held under President Xi’s administration, which is expected to announce more outward foreign direct investment (OFDI) to the African continent. Viewing the past trends of China OFDI ($5 billion in 2006, $10 billion in 2009, $20 billion in 2012,) China is most likely to announce more disbursements this year. Most Chinese investment in the past has been routinely cast as detrimental to Africa’s overall competitiveness since these projects are dependent on deals made at the highest political levels, lack competitive and transparent bidding processes, and benefit projects whose workforce is mostly Chinese, instead of delivering on promises of local job creation.

Africa sits on huge reserves of cheap and reliable gas, as is the case in Gabon, Angola, and Nigeria. The large influx of investment leads to the appreciation of local currencies, deeming African exports less competitive in the long run (Dutch Disease). Against the backdrop of scepticism surrounding Chinese “land grabbing” investment strategies as well as its exploitative investment in quarrying and mining industries, China has started to shift its focus to infrastructure projects. For instance, it began promoting a comprehensive “three network” project composed of high-speed rail, highways and regional aviation. While investing in industrial development ought to help African countries evolve from a resource-based to an efficiency-driven economy, close observers suggest that China will unlikely change its course.

To further complicate matters, China has increased its interest in African security. A long advocate of “non-interference” in other countries’ affairs, China sent an infantry battalion to South Sudan earlier this year — the largest combat troop contribution to the UN Peace Keeping Mission in the country. While this might be commendable for the continent, there might be ramifications in the short and long terms.

This was partially the reason why China recently became more tactful with its approach to Africa. For one, it has been offering access to capital to countries in the region. China’s Export-Import Bank has extended $62.7 billion in loans to African countries between 2001 and 2010, some $12.5 billion more than the World Bank. It has also been staying away from making announcements of major oil and mining contracts. Instead, it chooses to focus on job creation, investment in infrastructure, and technology transfer.

But large loan facilities and railway and infrastructure projects may not be enough to help reverse the image of the Chinese. China’s relationship with Africa dates back some half a millennium. When Chinese admiral Zheng He’s fleet of ships arrived at the east coast of Africa in the early 15th century, he presented gifts of gold, silver, porcelain and silk. Today, the country is offering investments and infrastructure. The challenge for China is to make sure its companies comply with local rules and regulations. It also has to change its view of the locals, so that the latter are seen as equal business partners. Only by making such fundamental shifts could China capture people’s hearts and minds and not just their mines.

Mark Esposito is a professor of business and economics at Harvard University Extension School, and at Grenoble Graduate School of Management in France, and a senior associate at the University of Cambridge-CISL in the UK. Follow him on Twitter @Exp_Mark.

Terence Tse is an associate professor of finance at ESCP Europe and the head of competitiveness studies at i7 Institute for Innovation and Competitiveness. Follow him on Twitter @terencecmtse.