People are more likely to share information with colleagues inside their professional group, writes Stefano Tasselli

Effective knowledge sharing is a fundamental source of organisational functioning. In modern organisations, in which people increasingly experience virtual interactions and ephemeral encounters with coworkers, the ability to share knowledge tends to be associated with important outcomes, including higher performance, productivity, and likelihood of expansion and survival.

However, there are difficulties associated with the transfer of knowledge among members, in particular in those firms in which intra-professional and organisational hierarchies still play a prominent role. Professionals tend indeed to develop specialised language and a local understanding that allow them to communicate effectively with colleagues belonging to the same professional groups, but also make them less permeable to extramural information and knowledge stored in different (and possibly distant) parts of the organisation. Hence the following questions: How can organisations improve knowledge sharing among their members? What kinds of actors are more likely to facilitate knowledge transfer within organisations? And what kinds of actors are more likely to benefit from receiving useful knowledge from coworkers?

In my recent study, I analysed social networks data and qualitative interviews collected in a hospital department to show that the structure of professional networks plays an important role in explaining patterns of inter-professional knowledge transfer in organisations. First, I found that professionals are more likely to share knowledge within rather than across the boundaries of their professional groups. Thus, doctors find it easier to transfer knowledge to other doctors than to nurses, and nurses find it easier to transfer knowledge to other nurses than to doctors. Like in the “cavemen world” described by Duncan J. Watts (1999), professionals tend to live in dense, isolated clusters (or “caves”) of strong, frequent, and redundant relations with professional co-members. Status gaps between professional groups, distinct educational backgrounds and languages make resonant the boundaries existing between such modern “caves”.

However, organizations are rarely decomposable into impermeable caves: the formal boundaries between professional groups might contain the majority, but typically not all of the observed interactions among organizational members. We found that actors who are both central in the intra-organizational network and closely knit to other professionals play a precious role in facilitating knowledge sharing among members of different professions. This is the case of clinical directors, who leverage their central role to facilitate knowledge transfer patterns within their hospital departments.

In line with previous research on social networks, I show that knowledge sharing might be beneficial not only for the overall organisation, but also for individuals occupying idiosyncratic positions in the intra-organisational network. In particular, the more professionals span across social divides and connect unconnected others, the more they are likely to detect non-redundant, valuable knowledge.

But an interesting finding is that brokering knowledge is not equally advantageous for anyone within the organisation. The internal structure of professional networks (see in Figure 1 the overall network of doctors and nurses within the hospital department) affects the extent to which individuals benefit from inter-professional knowledge transfer patterns. Thus junior doctors complement their desire to reach high status with the high status arising from their professional groups to successfully leverage brokerage in search of useful knowledge. Whereas nurse managers leverage their organisational rank to get access to useful knowledge, although they belong to a lower-status professional group. 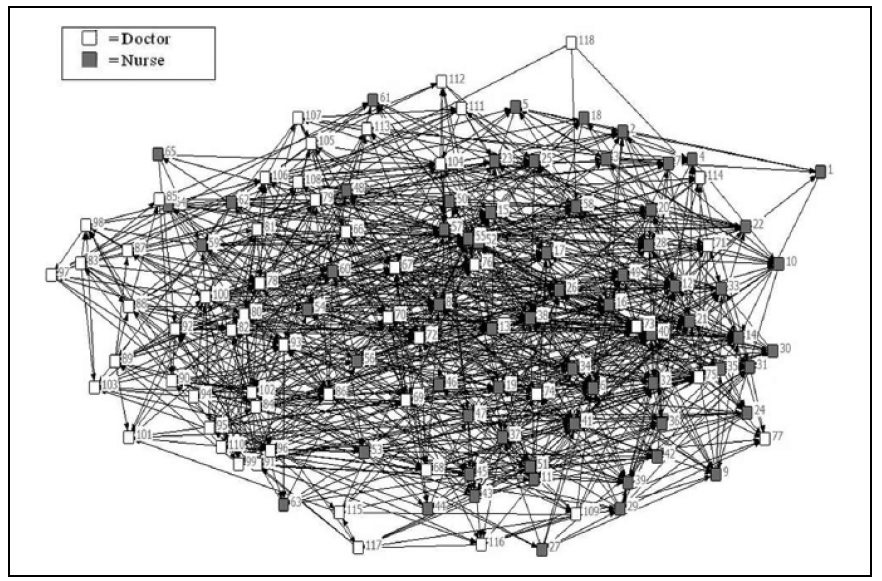 In summary, organisations can be represented as “pipes” that either facilitate or hamper the flow of knowledge and other resources. Studying the composition of intra-professional and inter-professional social networks can help understand those complex patterns by which knowledge is shared among organisational members. A full understanding of knowledge sharing patterns requires taking into account the interplay between network structure and the characteristics of individual actors. Although network positions represent indeed templates for action, only specific kinds of people (in the hospital setting analysed in this study, junior doctors and nurse managers) seem to fully leverage those opportunities and access valuable, idiosyncratic knowledge arising from bridging across disconnected professional groups.

Stefano Tasselli is an Assistant Professor at the Rotterdam School of Management, Erasmus University. He holds a PhD in Management from the Judge Business School of the University of Cambridge. His research interests focus on the micro-foundations of organizational social networks, with particular attention to the interplay between network structure and individual personality in explaining outcomes. His research has been published, among the other journals, in the Annual Review of Psychology, in Organization Studies, and in the Journal of Management.