European banking union: should the ‘outs’ join in?

For the UK (and others), joining would be beneficial, but there's strong political opposition, argue Pia Hüttl and Dirk Schoenmaker

European banking union: should the ‘outs’ join in? 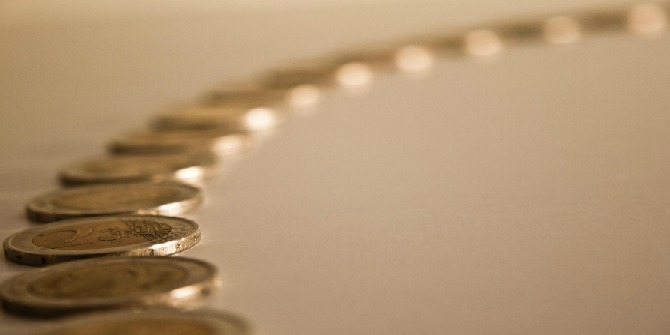 The ultimate rationale of banking union

Banking union was conceived as a reply to one of the root causes of the European debt crisis: the sovereign-bank loop. To break the loop, euro-area leaders decided to move responsibility for banking supervision and resolution to the European level.

Banking union consists of the SSM (Single Supervisory Mechanism) and the SRM (Single Resolution Mechanism). While euro-area members have been included in the banking union by default, the SSM and the SRM allow non-euro EU countries to participate.

For these countries, if and when to join the banking union is an important strategic question, but opposing positions have emerged (Figure 1).

Sweden declared in 2014 that it would not join banking union in the foreseeable future, and has stuck to this position since, remaining the United Kingdom’s most sceptical ally.

In contrast, Denmark’s government declared in April 2015 that it wanted to become part of the banking union, which it viewed as being in the interests of its financial sector.

In central and eastern Europe, the Czech Republic, Hungary and Poland have adopted a ‘wait-and-see’ approach, while Bulgaria and Romania are more positive about joining banking union. 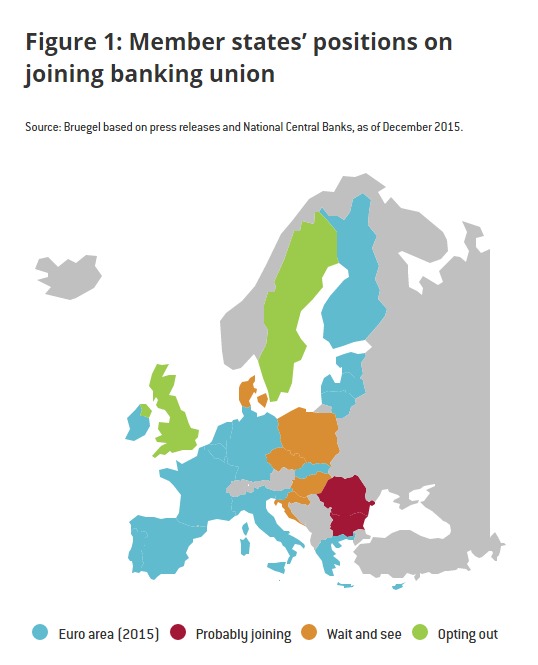 The ‘wait and see’ countries fear that joining banking union might imply joining the euro beforehand. However, as we argue in our policy contribution,the long-term rationale of banking union is linked to cross-border banking in the single market, which goes beyond the single currency.

Following this argument, the debate surrounding the question of opting-in is not necessarily a debate about joining the full package of economic and monetary union and banking union.

When banks are supervised and regulated by national institutions, but operate across borders, authorities do not take into account the cross-border externalities of their actions. This can lead to coordination failures between national authorities,

The international reach of a country’s banking sector can be captured by dividing cross-border banking into outward and inward banking claims. Outward banking captures the exposure of multinational banking groups to other countries, beyond the domestic market, while inward banking is defined as the banking claims from abroad on the country in question.

The euro-zone ‘outs’, in particular the Scandinavians, have a large share of outward banking claims to the rest of Europe.

Nordea (Sweden), SEB Group (Sweden) and Danske Bank (Denmark) have assets amounting to 18 percent, 14 percent and 12 percent, respectively, in the banking union (in particular Finland and the Baltics). These three banks are pan-Nordic banks. 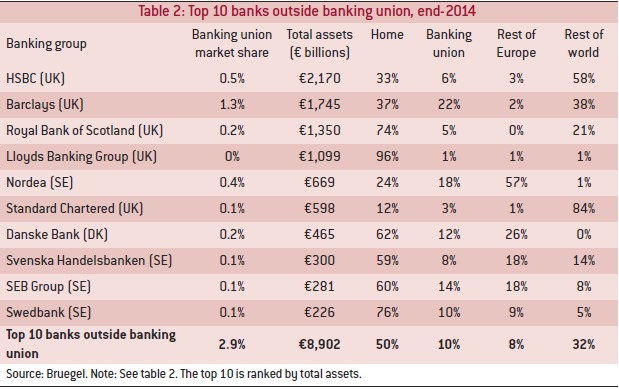 In terms of inward banking, the share of cross-border subsidiaries in central and Eastern Europe is very high, with inward claims ranging from 39 and 80 percent, as shown in Table 4.

The vast majority of these subsidiaries come from banks headquartered in the banking union (60 out of 65 percent), often Western European banks such as ING, KBC Group, Erste Group and UniCredit. 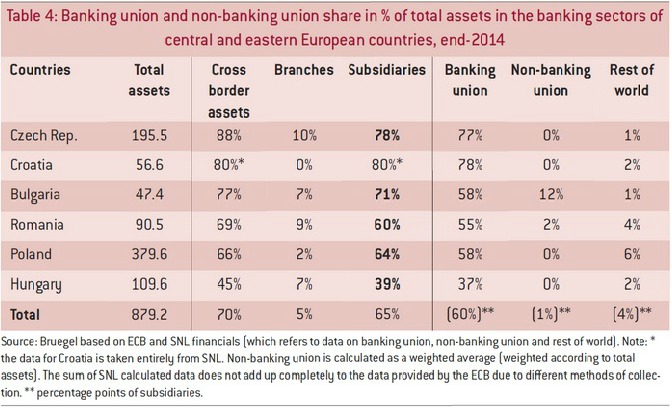 As for the share coming from the rest of the world, major US and Swiss investment banks form a substantial part. These banks use their London offices as a springboard to conduct business across the European Union, reflecting the importance of London as an international financial centre.

While the SRM is a complicated coordination mechanism, the Single Resolution Board has to take a wider perspective for the resolution of banking union banks. This banking union-wide mandate should prevent the splitting of banks on national lines in the resolution process, as happened during the great financial crisis.

For the ‘outs’ in central and eastern Europe, the banking union would be a more stable arrangement for managing financial stability and maintaining lending capacity than the Vienna Initiative, which was used on an ad-hoc basis during the crisis.

Finally, for the United Kingdom, joining banking union would also be beneficial, but there is strong political opposition. Given the strong financial links within the banking union, the Bank of England and the ECB will have to cooperate closely in order to ensure financial stability.

Pia Hüttl is an Affiliate Fellow at Bruegel. Prior to this, Pia worked as a Trainee in the Monetary Policy Stance Division of the European Central Bank, and as a Blue Book Stagiaire at the Monetary policy, Exchange rate policy of the euro area, ERM II and Euro adoption Unit of DG ECFIN. She holds a Bachelor’s degree in European Economics and a Master’s degree in International Economics from the University of Rome Tor Vergata. She also obtained a Master’s degree in European Political Economy from the London School of Economics, with a thesis on Current Account imbalances in the Euro area and the role of financial integration. Her research interests include Macroeconomics, International Economics and European political economy. She is fluent in German, Italian and English, and has good notions of French.

Dirk Schoenmaker is a Senior Fellow at Bruegel. He is also a Professor of Banking and Finance at Rotterdam School of Management, Erasmus University Rotterdam; a member of the Advisory Scientific Committee of the European Systemic Risk Board at the ECB; and a Research Fellow at the Centre for European Policy Research (CEPR). He has published in the areas of central banking, financial supervision and stability, European financial integration and climate change. Dirk is author of ‘Governance of International Banking: The Financial Trilemma’ (Oxford University Press) and co-author of the textbook ‘Financial Markets and Institutions: A European perspective’ (Cambridge University Press). He earned his PhD in economics at the London School of Economics. Dirk was Dean of the Duisenberg School of Finance and served at the Netherlands Ministry of Finance and at the Bank of England. He is a regular consultant for the IMF, the OECD and the European Commission.