Leaving the EU could lead to a fall in inward foreign direct investment of close to a quarter, writes a CEP team 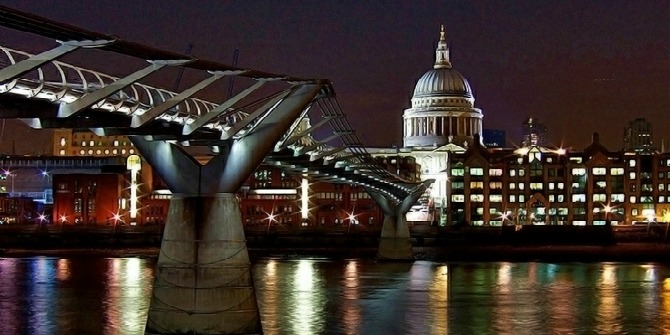 According to UK Trade and Investment (UKTI, 2015), the UK has an estimated stock of over £1 trillion of FDI, about half of which is from the European Union (EU). Only the United States and China receive more FDI than this.

… but Brexit would kill the vibe

A new CEP Report on Brexit and FDI (Dhingra et al, 2016b, ) looks at bilateral FDI flows across all 34 OECD countries over the last 30 years. We look at how FDI changes when countries join the EU after controlling for a large host of factors such as the size and wealth of the different countries.

The evidence is clear. Being in the EU increases FDI by around 28% (the exact magnitude ranges from a 14 per cent to 38 per cent increase in FDI depending on the statistical method used). These estimates are similar to those in Campos and Coricelli (2016), who find an impact of 25 per cent to 30 per cent using an alternative method that compares the evolution of UK FDI with a comparison group of similar countries.

Being a member of the European Free Trade Association (EFTA) like Switzerland would not restore the FDI benefits of being in the EU. In fact, we find no statistical difference between being in EFTA compared with being completely outside the EU like the United States or Japan. So striking a comprehensive free trade deal after Brexit is not a good substitute for full EU membership.

Quantifying the relationship between FDI and growth is notoriously difficult so the exact number is subject to considerable uncertainty. But it suggests falls in FDI following Brexit would matter for living standards in the UK. An income decline of 3.4 per cent is larger than our static estimates of the losses from trade 2.6 per cent in our pessimistic case, but smaller than the long-run dynamic losses from trade of over 6.3 per cent (Dhingra et al, 2016a).

The macroeconomic estimates give a bird’s eye look at the effects but it’s useful to hone in on particular industries: cars and financial services.

Cars are a successful part of UK manufacturing. In 2014, the industry contributed around 5.1 per cent to UK exports, and about 40 per cent of its exports were to the EU.

Head and Mayer (2015) use information on assembly and sales locations (IHS Automotive data) on 1,775 models between 2000 and 2013. In their work, Brexit has two main disadvantages:

Financial services have the largest stock of inward FDI in the UK (45 per cent) and constitute 12 per cent of tax receipts (Tyler, 2015). The single market allows a bank based in one member of the EU to set up a branch in another, while being regulated by authorities in the home country. This ‘single passport’ to conduct activities in EU member states is important for UK exports of financial services. Passporting means that a UK bank can provide services across the EU from its UK home. It also means that a Swiss or an American bank can do the same from a branch or subsidiary established in the UK.

The UK might be able to negotiate some of these privileges after Brexit. Members of the European Economic Area outside the EU enjoy them, but they also have to contribute substantially to the EU budget, accept all EU regulations without a vote on the rules and must allow free labour mobility with the EU. And even for these countries, like Norway who must ‘pay and obey with no say’, there seem to be greater difficulties in doing business than a full EU member (Bank of England, 2015).

Staying in the EU also gives the UK the ability to challenge new regulations in the European Court of Justice, a right that was successfully exercised when the European Central Bank wanted to limit clearing-house activities to the euro area. If the UK leaves the EU, it would lose its leverage in negotiating and challenging future EU regulations.

Is it worth it?

Overall, Brexit would cut inward FDI – by close to a quarter according to our new estimates. This will damage UK productivity and could lower real incomes by 3.4%. Case studies of cars and finance also show that Brexit would lower EU-related output of goods and services, and erode the UK’s ability to negotiate concessions from regulations on EU-related transactions.

Of course, these costs may be a price that many people are willing to pay to leave the EU. But they are not trivial costs. The UK received about £44 billion of new FDI inflows in 2014 according to UKTI (2015) – losing almost £10 billion of this after Brexit would be no laughing matter.