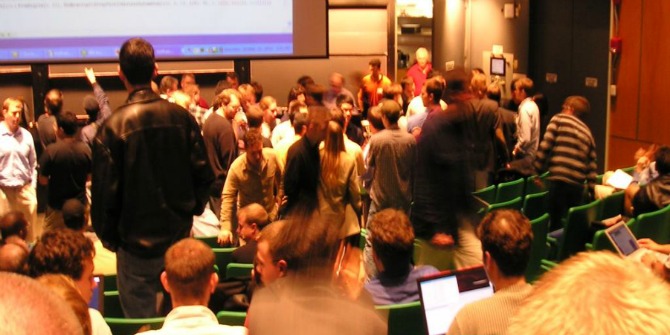 Early-stage investors make decisions to provide seed money to a startup based on the slimmest of information about the business. Even when they conduct in-depth due diligence, they receive very little tangible data on the product or service (because there is often not yet even a prototype) and they do not formally assess the market growth possibilities (because the markets may not yet be known).  Early stage investors often cannot rely upon the models and analytic tools taught in finance courses, and yet this type of investment is an increasingly important contributor to economic growth. These investors say they rely on their “gut feel” for a business, and others have said it is based on “the chemistry” between funders and the entrepreneur seeking their money. But what is gut feel, exactly, and how accurate are these angel investors at predicting the investments that will yield the supernormal returns (ten times investment or more) they say they are seeking?

We conducted a series of studies to better understand what exactly earliest stage investors are assessing in deciding to allocate money, and how accurate they are in predicting what the investors in our studies called “home runs.” We conducted three studies focused on experienced angel investors, specifically examining those who look for ventures asking between US$250,000 and US$2 million, with individual angels investing US10,000 and US$20,000 on a per angel, per investment basis.

First, in contrast to received decision theory, we found that angel investors did not seek to maximise return in each business, but expected to lose money on most of them. They sought out those few investments with the possibility of extraordinary profitability. As one angel said, he sought “something so ridiculous it could actually work… Like Twitter. People thought that was truly, truly [weak].” They did not fear failure, but actively embraced it, making many small-stakes (for them) investments. Further, the rewards were social and status related as much as financial – they wanted to be recognised as one of the seers who saw the potential of the next Uber.

Our work suggests that those who propose that certain cultures have not had as strong an entrepreneurial culture as they see in Silicon Valley, because in these cultures the population is more risk-averse, may be missing the important role of investor status-seeking in providing the early-stage funds.

Others have suggested that formal analysis and intuition are “mutually undermining,” but for our experienced angel investors they were not. Their assessments were genuinely holistic combinations of thought and feeling. We believe their confidence in their intuitions comes from 1) their extensive technology-specific investment experience, 2) they know that the formal business plans for such early stage enterprises are as much wishful thinking as reality, and 3) they did not have to justify their decisions to anyone else. Because “it just feels right to me” is not usually a persuasive argument when seeking funds, we believe these individual angel investors were freer to rely on their experience-based gut feelings than those who must justify decisions to third parties.

Finally, we know that intuitions are subject to numerous biases, so how well did the angels identify the extraordinarily profitable investments? In our third study we asked a separate set of angels to report whether or not they would invest in videotaped pitch sessions from three top US technology pitch competitions. We found that their reliance on their gut feelings about the entrepreneurs did successfully predict which ideas had either been acquired, had an initial public offering, or a return of ten times the initial investment four years later.

In sum, we found that early-stage investments in ideas with unknowable risks appear to be fundamentally different, but no less accurate, than the investments in going-concerns in which formal analysis plays a stronger role. Fostering angel groups in which individuals invest their own money — with regular meetings and therefore, a strong social setting — may be a more effective way to foster entrepreneurship than working through existing financial institutions with a fundamentally different investment approach.

Jone L. Pearce is Dean’s Professor of Organization and Management at The Paul Merage School of Business, University of California, Irvine.  She studies the effects of interpersonal processes, governmental, and organizational control systems on organizational behavior. More information can be found here. She can be reached at  jlpearce@uci.edu.

Laura Huang is an Assistant Professor of Management and Entrepreneurship at the Wharton School. Her research examines early-stage investment decisions, and how perceptions and cues influence an individual’s ability to make important, high-stakes decisions. She is currently studying how an investor’s gut feel plays a role in entrepreneurial decision-making, in addition to business viability data. Prior to entering academia, Professor Huang worked across North America, Europe and Asia in investment banking, consulting, and general management for corporations. She has also served as a consultant and advisor to a number of entrepreneurial start-ups globally.