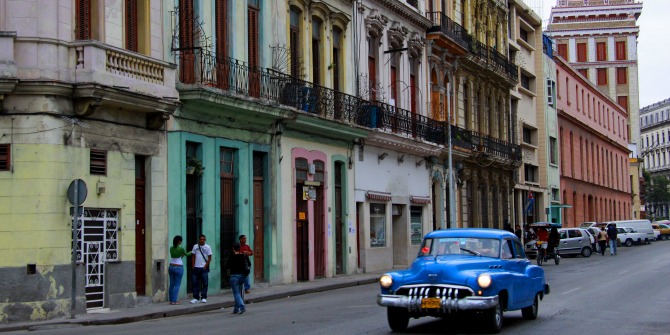 The car was a Detroit classic on a Havana street, a pink and white 1956 Chevy Bel Air with a nickname out of a rock ‘n roll song: Lola. And parked behind the wheel was a distinguished American guest, New York Governor Andrew Cuomo, come to Cuba in April 2015 on an official trip. But Lola carried a surprise under the hood. The original Chevrolet power plant had long since died. In its place was a four-cylinder Toyota diesel engine.

The mash-up is typical in a Cuba where vintage cars that would make a collector salivate are kept running through agile, creative cannibalization. And it could serve as a metaphor for a Cuban economy that entices American businesses with the lure of an untapped market, but contains disguised obstacles that can frustrate all but the hardiest entrepreneur, writes freelance journalist Christina Hoag in her report for SAGE Business Researcher.

“The attraction of Cuba is kind of an amusement park in decay,” John S. Kavulich III, president of the U.S.-Cuba Trade and Economic Council, told Hoag. With the re-establishment of Cuban-U.S. diplomatic relations after a half-century freeze-out and President Obama’s recent visit, U.S. business executives are dreaming big dreams.

Trade fairs in Havana draw scores of top-drawer American companies ranging from PepsiCo to Caterpillar to Boeing. The Cuban government is opening the state-run economy to foreign investment with a goal of attracting $8.2 billion in FDI. Obama has carved out ever-wider exceptions to the 54-year-old U.S. embargo on trade with Cuba that enables expanded activity in fields such as telecommunications and travel.

“Everyone is interested in Cuba right now,” Alana Tummino, head of the Council of the Americas’ Cuba Working Group, told SAGE Business Researcher. “The Cubans are totally inundated with business groups traveling down and wanting to meet with ministry officials.”

But then come the hard realities of trying to do business in an economy that is tightly controlled by a one-party state, an infrastructure that is dilapidated and outdated, and a populace whose purchasing power is limited by a monthly median wage equivalent to $20.

Add to that a legal system that lacks transparency and is heavily tilted in favor of the state; court proceedings are conducted in secret, and those at the top of the law school classes are recruited as prosecutors, while judges often are chosen from the bottom. “There’s been a lot of irrational exuberance about Cuba,” says James Cason, who served as principal officer of the U.S. Interests Section in Havana, which functioned in lieu of an embassy, from 2002 to 2005. “It’s a very risky business.”

British business executive Stephen Purvis found out just how risky. The head of a company called Coral Capital that invested in Cuban tourism and other businesses, Purvis was accused of espionage in 2011. After spending 16 months in jail awaiting trial, he was convicted of illegal foreign currency transactions and then released. He lost $15 million in assets. “The central bank had authorized all our transactions for 12 years,” Purvis said. “Then, all of a sudden, they were saying they weren’t authorized, and that we didn’t have specific permission. It was a very arbitrary application of the law.”

Other companies, however, report utterly benign experiences. “We’ve been in Cuba for over 20 years, and it’s a remarkably stable place to do business,” said David Pathe, CEO of Canada’s Sherritt International, which operates a nickel mine and is one of Cuba’s largest foreign investors.

And, risks or not, the Americans are coming. Airbnb, the internet-based home rental service, expanded to Cuba last year with 1,000 listings. Sprint and Verizon have started offering cell phone roaming services after signing agreements with the state-run telecommunications company. Netflix heralded the arrival of its streaming video service in 2015 with an exuberant tweet of “Bienvenida Cuba!”—even though its $7.99 monthly charge represents more than one-third of the median wage.

If the promise is to be fulfilled, a way must be found to bridge the differing economic goals of the two governments, according to analysts. Washington’s main objective is to stimulate greater private investment, while Cuban leaders want deals that will shore up the state-owned enterprises that control three-quarters of the economy. “There’s a disconnect between what U.S. companies can do [under the embargo] and what Cubans want,” says Tummino of the Council of the Americas.