Fear of failure may inhibit entrepreneurs, but may also drive them to work harder

Fear of failure may inhibit entrepreneurs, but may also drive them to work harder 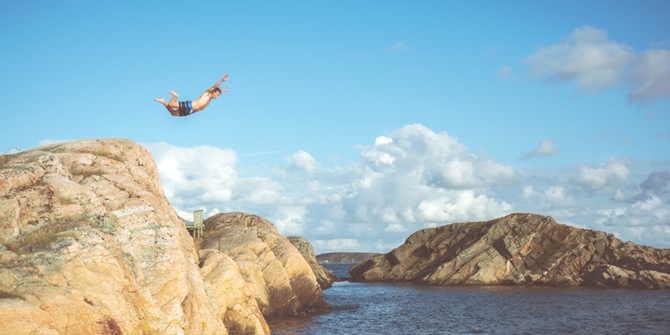 “Let fear once get possession of the soul, and it does not readily yield its place to another sentiment.” —  Sebastopol, Leo Tolstoy

The experience of fear of failure starts with the cognitive: perception and evaluation of events that are significant to the individual. Their significance depends on the degree to which they are perceived to be threats: how strongly individuals believe that certain negative consequences will occur.

Our interviews made it clear that the perception of potential threats can be divided into two sets: external social cues (relating to personal financial security, the venture team’s ability, and the ability to finance the venture) and internal evaluations of the self (relating to one’s own personal ability related to the business, social esteem resulting from disappointing others, the real-world potential of the entrepreneurial idea, and opportunity costs).

Together, these two sets of threats impact beliefs concerning the feasibility and desirability of engaging in entrepreneurial action. Naturally, fear is not only about the cognitive, but also about the affective: feelings that are experienced in relation to failing and involved both negative and positive affective states – moods, feelings and emotions – as a result of the perceived threats. Interestingly, these affective experiences can also exert control over the cognitive elements: how you feel colours how you think in significant ways.

Our interviews revealed what we had anticipated: that entrepreneurs are not only inhibited by fear of failure, in many cases they are driven on to greater efforts by it. While there was clearly a group of individuals who were completely inhibited by their fears, others managed to work through them, even enjoying being able to overcome them. But the relationships are not simple.

In fact, being motivated by fear can lead to either procrastination – ignoring important, but difficult tasks – or spending a disproportional amount of time on tasks to respond to perceived threats while ignoring other business-critical activities. So fear of failure does have significant motivational and behavioural consequences, towards both inaction and action. But even this is not a sufficiently nuanced understanding. Fear also leads to a qualitatively different form of motivation, in which attention may be directed to the wrong actions, which ironically increases the probability of failure. Perhaps even more dangerous is where denial of threats is a strategy used to avoid them, which means that no attention is given to certain uncomfortable cues.

Fear of failure is not a static construct that is simply experienced or not experienced, but rather changes as events unfold and as experience builds. The significance of any given threat for an entrepreneur is also strongly influenced by the entrepreneur’s level of commitment to the venture. Naturally, personal commitment increases over time as more effort and resources are poured into a venture, as opportunity costs increase, as more and more people become dependent upon the venture’s success, and as the entrepreneur’s identity becomes more closely associated with the venture.

Thus, while learning over time might serve to reduce the effect of particular threats, the ever-growing level of commitment an entrepreneur has to the venture serves to increase the significance of threats of failure. Fear of failure is not something that is overcome and disposed of in the earliest days, but something that must be managed and possibly even lived with over the long term. This makes it all the more important to understand the consequences of fear of failure for the personal wellbeing of the individual, since fear represents a source of stress with potentially negative psychological and physiological consequences for the entrepreneur.

To truly appreciate the nature of fear of failure in entrepreneurship, we have to consider carefully what failure means; we have to consider a range of potential threats faced by the entrepreneur; we must take into account the interdependent relationships between thoughts and feelings; and we must consider a variety of behavioural, psychological, organisational and potentially even physiological outcomes.

Fear may well be both a source of inhibition and a source of striving, but the impact of that motivation can significantly direct the attention of the entrepreneur and not always to the right course of action. Furthermore, over time the frequent experience of fear may not only present risks for her organisation, but also for the entrepreneur’s own wellbeing. It is clear that even for very successful people, fear can be potentially harmful as well as occasionally quite helpful.

James Hayton, PhD (Georgia State University) is Dean and Distinguished Professor at Rutgers School of Management & Labor Relations. Dr Hayton’s area of expertise is in the management of people and organizations to build capacity for entrepreneurship and strategic renewal. His research on this topic has been published in the Journal of Business Venturing, Entrepreneurship Theory & Practice, Strategic Entrepreneurship Journal and elsewhere. He is Editor in Chief of the journal, Human Resource Management (Wiley).

Andreas Giazitzoglu is a lecturer in Entrepreneurship at Newcastle University. He’s interested in the intersection of sociology and entrepreneurship.