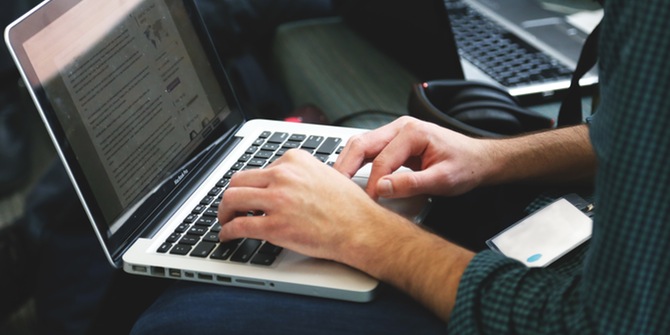 “The new literacy” is the term Neelie Kroes, former Vice President of the European Commission, uses to describe an individual’s skill in mastering information and communication technologies (ICT). She continues to explain that “the online world is becoming a bigger part of everything we do. No wonder these [ICT] skills are becoming central in the job market.” However, although there is the widespread belief that ICT skills, i.e. the ability of getting along in the digital world, matter for labour-market outcomes, rigorous empirical evidence on the wage effects of ICT skills has not yet been provided.

Using novel data on ICT skills from PIAAC – the OECD’s “PISA for Adults”, we show that ICT skills are substantially rewarded in modern labour markets. These data are unique as they provide objective measures of ICT skills in 19 developed economies, which can be compared within and across countries. Instead, previous studies relied on measures of ICT skills reported by survey participants themselves in rough categories, which are prone to substantial mismeasurement.

We show that one additional point in the ICT skills assessment is associated with roughly a 0.6 per cent wage increase. This implies that if an average worker in the United States – a country with ICT skills below the OECD average – increased her ICT skills to the level of an average worker in Japan – the top-performing country (see Figure 1) – her wages would increase by about 8 per cent. This effect size is similar to the wage effect of an additional year of schooling in developed countries. Estimated returns to ICT skills are very similar in an international setting, exploiting cross-country variation in ICT skills, and in a within-country setting, exploiting variation at a fine geographic scale within Germany.

The major empirical challenge was to assess whether the estimated association between ICT skills and wages indeed depicts a causal effect. A prime concern is that more able people may be more likely to accumulate ICT skills and may independently receive higher earnings because of their higher ability. Also, better jobs may more likely use and reinforce skills or they may provide the resources to invest in adult education, training, or computer courses. These are only two examples of the potential problems in a simple estimation of the wage returns to ICT skills. To address these problems, we exploit technological peculiarities in the broadband Internet infrastructure, because of which some persons got access to high-speed Internet earlier than others simply by chance. We show that having (early) Internet access kickstarts learning-by-doing in ICT skills.

In our first empirical strategy, we exploit the fact that existing voice-telephony networks were upgraded in most countries to provide broadband access. In consequence, countries with better-developed voice-telephony networks before the introduction of broadband in the late 1990s or early 2000s could roll out broadband faster than countries lagging behind in voice-telephony infrastructure. Our second empirical strategy makes use of the fact that some German municipalities, by chance, are too far away from the necessary infrastructure to have early access to broadband. We observe that people who were lucky enough to have early broadband access, because they live either in a country with a well-developed traditional voice-telephony network or close enough to the appropriate infrastructure in Germany, have higher ICT skills than their unlucky counterparts, but do not differ from them in their numeracy or literacy skills, which were also tested in PIAAC.

Concerning the channels through which ICT skills affect wages, we find that the positive wage returns can partly be attributed to the fact that individuals with higher ICT skills often work in jobs that involve abstract tasks (requiring problem solving, adaptability, and creativity), which pay substantial wage premia. At the same time, people with high ICT skills work less often in jobs that are routine in nature, and are therefore easily automatable. This is in line with the idea that the proliferation of computers amplifies the comparative advantage of those workers engaged in abstract tasks, and substitutes for workers performing routine tasks.

By showing that ICT skills are rewarded quite substantially in the labour market, our results support Neelie Kroes’s notion of ICT skills as “the new literacy.” Since ICT skills are likely to become increasingly important in our increasingly technology-rich world, their acquisition (or absence) has serious implications for individual labour market success and overall inequality. Thus, the rather lackluster performance of some European countries in the PIAAC assessment of ICT skills is all the more worrisome – in particular, the post-communist countries and Ireland constitute the bottom of the international league tables (see Figure 1). However, we show that ensuring access to the Internet so as to kick-start learning-by-doing is an effective way of reducing the wage gap between “digital natives”—those who are capable of using modern ICT tools to get along in a digital world—and digital illiterates. This is especially important for the discussion about social inequality in access to the Internet, also known as the “digital divide.” The fundamental insight of this paper—that ICT skills can be promoted by providing access to ICT infrastructure—suggests that the efforts by policy-makers worldwide to expand broadband coverage (e.g., the EU’s “Digital Agenda”) may prevent a drifting apart in employment opportunities when advances in ICT change job demands.

Figure 1: ICT Skills around the World 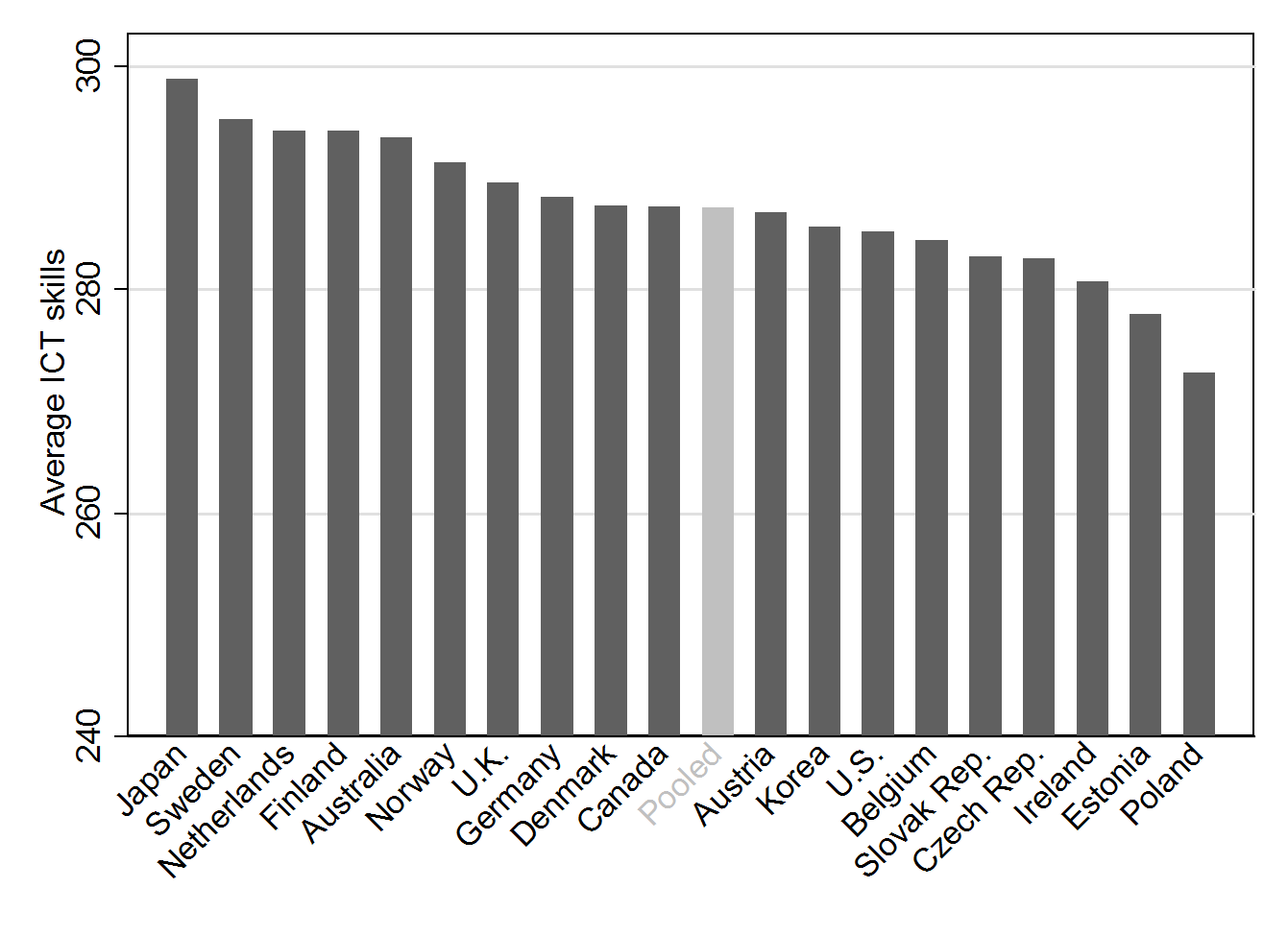 Oliver Falck is the Ifo Professor of Empirical Innovation Economics at Ludwig-Maximilians-University (LMU) Munich, Germany, and Director of the Center for Industrial Organization and new Technologies at the Ifo Institute, Germany. He is also the Program Director of CESifo, the world‘s third largest, Europe-based research network in economics. He received his Ph.D. in Economics from Technical University of Freiberg in 2006, and received his Habilitation from LMU in 2011 on innovation and regional economic development. He has extensive experience in applied innovation and entrepreneurship research and is co-editor of the best-selling Handbook of Research on Innovation and Entrepreneurship. He has extensively advised corporations and governments on innovation and growth strategies, and has been principal investigator on various studies for German federal ministries, the local government, foundations and companies for the last nine years.

Alexandra Heimisch is a Junior Economist and Doctoral Student at the Center for Industrial Organization and New Technologies at the Ifo Institute, Munich, Germany since 2014. She holds a Bachelor of Science in Economics from the LMU, Germany and a Master of Science in Economics from the University of Essex, UK. Her research interests are topics around ICT infrastructure, also in connection with labor markets and regulatory issues.

Simon Wiederhold is an economist at the Ifo Institute for Economic Research, Ifo Center for the Economics of Education. He is also the guest coordinator of CESifo, the world’s third largest, Europe-based research network in economics. He received his Ph.D. in Economics from the University of Jena. His main research interests are labour markets, economics of education, and economics of innovation. He has published in leading international journals. From 2014-2015, he spent six months on a research visit at Harvard University. 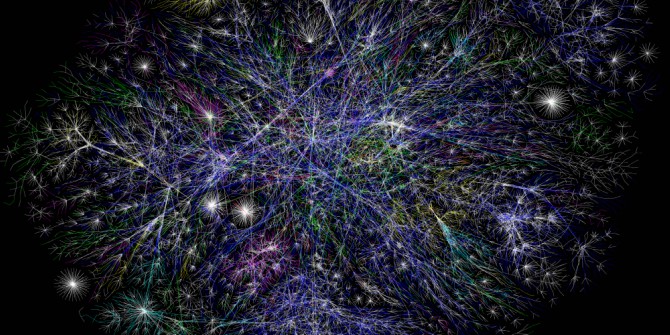 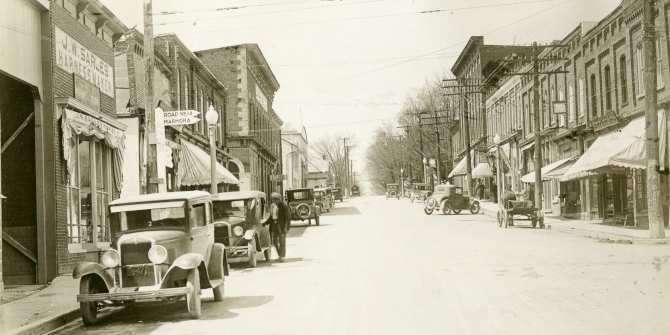 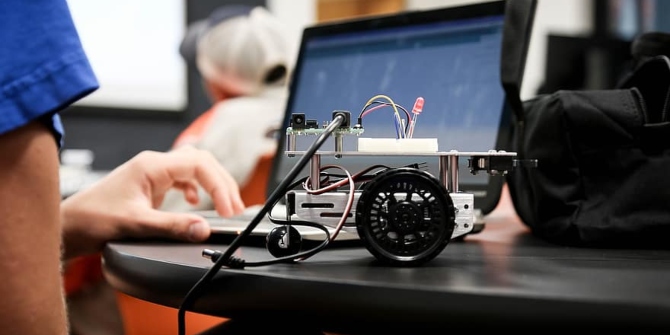