The malling of America may be history

The malling of America may be history 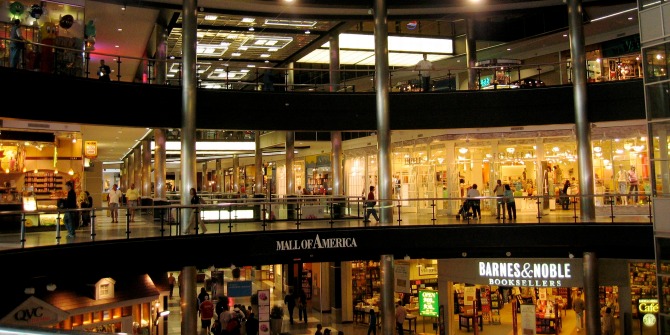 Mall of America interior, James Patterson, under a CC BY 2.0 licence, via Wikimedia Commons

Is the great American suburban shopping mall a dinosaur?

If you visit the site of Northland Center in suburban Detroit, you come away thinking so, because Northland was a trend-setter throughout its life cycle. It was the world’s largest shopping center when it opened in 1954, just as the postwar suburban sprawl hit full stride. It was completely enclosed 20 years later to match the retailing zeitgeist of that era. Last year, after a long decline, it shut its doors.

Northland is just one of dozens of decaying regional malls to close since 2011, writes freelance correspondent Sharon O’Malley in her report for SAGE Business Researcher. She cites data from Green Street Advisors, a research and consulting firm that tracks mall activity, which predicts that at least 15 percent of the U.S.’s 1,052 regional and super-regional suburban malls – enclosed shopping centres measuring 300,000 square feet or more that draw visitors from long distances – will close over the next decade. Some will be razed; others will be converted into community centres, churches or schools.

Other industry analysts envision even fewer massive malls in the future. Urban planner Ellen Dunham-Jones tells O’Malley that 42 percent of malls are already dead or nearly so. A CoStar Group survey last year determined that in almost one-fifth of enclosed malls, 10 percent or more of storefronts are vacant. And 3.4 per cent of malls had vacancy rates of at least 40 per cent, a sure sign of impending death.

In fact, tracking dead and dying malls has become something of a spectator sport for historians, the news media and nostalgic shoppers. Just take a look at deadmalls.com, a website that has achieved a cult-like status among mall-watchers.

And yet, that lumbering triceratops may still have some life. For all the buzz about the new urbanism, 45 per cent of all U.S. shoppers ranked the traditional mall as their preferred retail destination in a survey taken earlier this year. And owners of high-end malls are reaping greater financial rewards than investors in other forms of real estate.

That’s proof that “the malls are not dying, and the malls are not going to die,” Jan Rogers Kniffen, CEO of J. Rogers Kniffen Worldwide Enterprises, a retail consulting firm, tells SAGE Business Researcher. “We may see some serious attrition among these great malls, the 1,100 regional malls. But we’re never going to see [top-tier mega-malls] struggle. They’ll just take more share.”

The malls that make the cut typically offer something more than the usual retail experience. A case in point is the Mall of America in suburban Minneapolis. At 4.2 million square feet, it’s the largest in the United States, and it attracts visitors with a lot more than just shopping; there’s a theme park and even a wedding chapel.

So-called Class A malls are catering to shoppers with money to spend, replacing struggling midlevel department-store anchors like Macy’s with luxury retailers like Saks Fifth Avenue, Nordstrom and Neiman Marcus. At the other end of the spectrum, some malls in less affluent communities are taking in discounters such as Target, T.J. Maxx and Marshalls, signing up supermarkets, or reaching beyond retail for new anchors like medical or government offices.

Caught in the middle, the most vulnerable are Class B and Class C malls whose owners have not invested in their upkeep or upgrades. Especially endangered are older shopping centres in communities with declining populations and high unemployment, O’Malley writes.

Their litany of woes include the growth of online shopping, the steady closure of anchor stores such as Macy’s and Sears, a general oversupply of malls, a debt overhang from a “borrowing binge” for mall construction in the 1990s, and changing demographics and shopper tastes – teenagers spend 26 per cent less time at the mall than they did a decade ago, according to investment bank Piper Jaffray, which conducts a semi-annual survey of teen spending.

Indoor mall construction peaked in 1990 with 16 million square feet of new space, and has tapered off every year since. In 2007, for the first time in more than 40 years, no new malls opened in the United States. Five years passed until the next opening; just one major mall opened last year. The long-delayed, $5 billion American Dream Mall in New Jersey’s Meadowlands, across from New York City, may open within two years. Architect Terry Shook, founding partner of Charlotte- and Los Angeles-based Shook Kelley, says it may be among the last new enclosed malls to be built: “It’s like watching the last dinosaur walk across the landscape.”