But the effect on firm performance has been mixed across the different countries, write Simona Comi, Mara Grasseni, Federica Origo and Laura Pagani

In the last decade, a number of countries adopted legislative actions to promote gender balanced representation on corporate boards. Norway was the first country to do so in 2003. Following the Norwegian example, some EU countries (Spain in 2007; Belgium, France, Italy and Netherlands in 2011 and Germany in 2016) have passed similar laws, albeit with different rules in terms of targeted firms, size of the gender quota, and severity of sanctions for non-compliers.

Available data confirm that such laws succeeded in increasing the proportion of women on boards. Apart from Spain, in all countries with mandatory quotas between 2004 and 2014, the proportion of women on boards increased sharply after the date of the introduction of the legislation (identified by the vertical lines in the country-specific figures) and it is currently well beyond the EU average.

Figure 1. Female proportion on boards of directors in the EU countries which passed mandated gender quota laws between 2004 and 2014 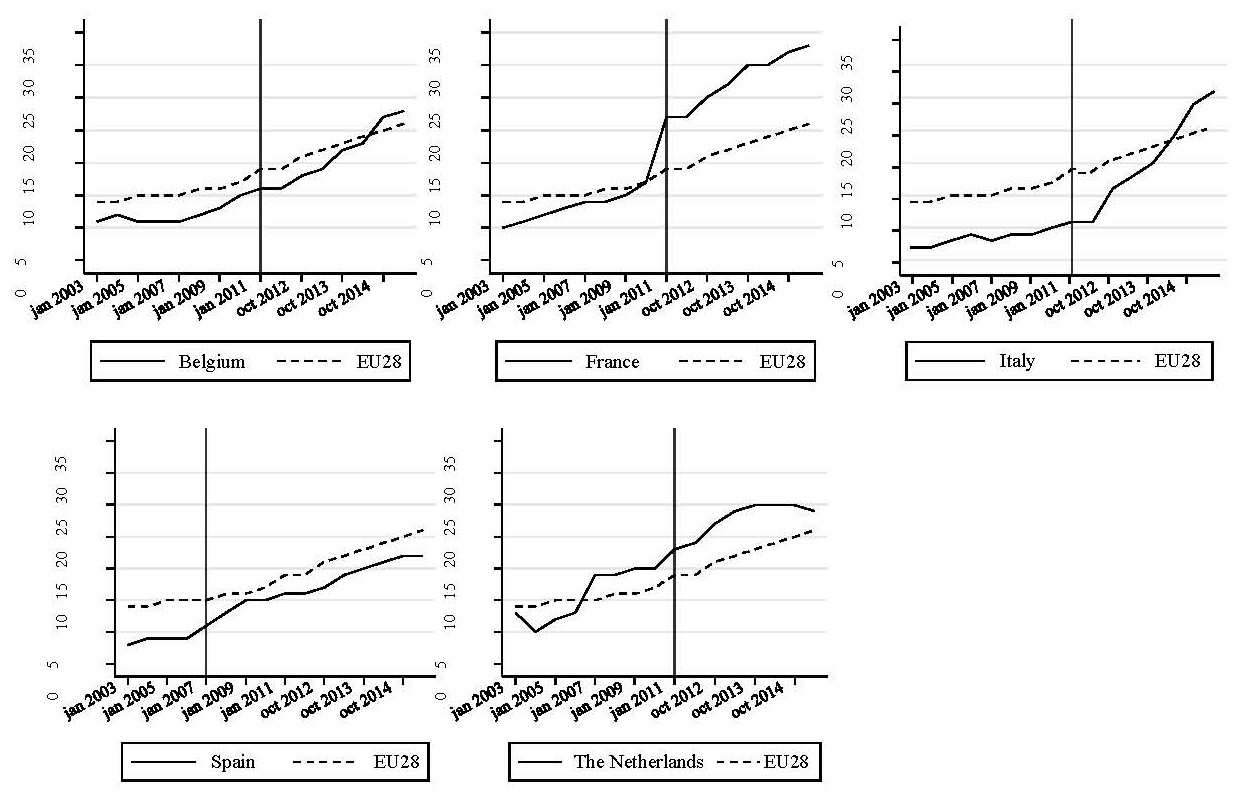 Source: our elaboration on European Commission’s dataset “Women and men in decision making”

What effects on firm performance?

We provide a comparative analysis of the effects of mandated gender quotas on firm performance in four EU countries: Belgium, France, Italy and Spain.

The analysis is based on firm-level accounting data for the period 2004-2014. To estimate the impact of legislation on gender quotas on firm performance, we compare changes in the performance of firms subject to the law before and after the introduction of mandated gender quotas with similar firms not subject to the law, both in the same country and in comparable EU countries that did not adopt gender quotas. We selected Germany, which did not pass any legislation on gender quotas in corporate boards over the period considered, as our preferred control country, but we also perform some robustness checks using Portugal as an alternative control country, particularly in the case of Spain.

We consider an extensive set of firm outcomes, aimed at capturing changes in employment levels, productivity and profitability.

We obtain mixed results. For Belgium and France we find that mandated gender quotas has had a positive effect on the number of employees (+9%), but with negative effects on both profitability and productivity (-5%).  The picture is different when we look at Italy: our results indicate that gender quotas has had a positive effect of firms’ performance, particularly on their productivity (+10%), without significantly affecting their employment levels. No significant effects are instead found in the case of Spain.

What explanations for so diverse effects across Europe?

Differences across countries can be explained by both the institutional design of these laws and country-specific gender culture.

Among the EU countries we considered, Spain is the only one where gender quotas have been introduced without sanctions for non-compliers. Not surprisingly, Spain is also the only country in which the share of women on boards did not increase significantly after the introduction of mandated gender quotas, with subsequently negligible effects on firm performance.

A crucial role is also plaid by gender imbalances and gender-based prejudices prevailing in a certain country when the new legislation on gender quotas is passed.

According to official international rankings regarding overall gender imbalance, economic participation and the share of women on boards, there is a rather strong cultural prejudice against women in the labor markets of Southern European countries, which is stronger against women in key labor market positions (see Table below). Italy is at the bottom of the ranking for all the indicators considered.

Therefore, we may expect that the introduction of gender quotas might increase the quality of the board and positively affect the organization’s efficiency and productivity in countries, like the Southern European ones, where highly qualified women are available but are prevented from entering corporate boards.

Source: our elaboration on data by the World Economic Forum and European Commission

The case of Italy

We also investigated the quality of the newly appointed (female) board members in explaining the positive results found in the case of Italy.

To study the main characteristics of board members before and after the introduction of mandated gender quotas, we collected additional detailed information on 2328 board members (in terms of gender, age, education, field of degree, work experience in managerial positions and as board member) in 192 publicly listed companies in Italy over the 2004-2013 period.

These data show that the main change registered in Italian boards since the introduction of mandatory gender quotas has been the sharp increase in the share of women with a college degree (from around one third in 2004-2010 to almost two thirds in 2013), particularly with a degree in law, economics or management, which should be the fields of study that are more likely to provide managerial skills. This occurred without any significant decline in women’s mean age (which remained around 50 years, compared to 60 years for men) or women work experience in managerial position (between 8-10 years, 3 years less than men). As expected, there has been a significant decline in average work experience as board member for women (from around 9 years in 2010 to 7 years in 2013, half of that registered for men in the same year). This evidence confirms that gender quotas actually helped to crack the glass ceiling in Italian targeted firms without reducing the quality of women (and men) on boards.

Even in a context with many highly qualified women ready to seat on boards, firms may find it hard to find and hire them due to the lack of information. In this perspective, initiatives such as “Ready4board Women” in Italy (that preceded the introduction of gender quotas) and “Global Board Ready Women” world-wide (supported by the European Commission), which provide searchable databases on senior women executives and professionals who meet strict criteria in terms of skills and experience, should help companies to comply with the mandated gender quota with no costs in terms of firm performance.

Simona Comi is Associate Professor of Economics at the Department of Sociology of the University of Milan-Bicocca (Italy).

Mara Grasseni is Assistant Professor of Economic Policy at the Department of Management, Economics and Quantitative Methods of the University of Bergamo (Italy).

Federica Origo is Associate Professor of Economics at the Department of Management, Economics and Quantitative Methods of the University of Bergamo (Italy).

Laura Pagani is Associate Professor of Economics at the Department of Economics, Management and Statistics of the University of Milan-Bicocca (Italy).