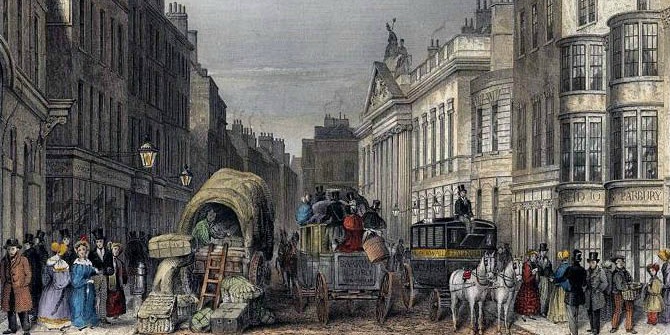 What would early Victorians make of today’s markets? Such questions are more than just idle curiosities. For example, the recent wide acceptance around the world of negative interest rates was a surprise. Why didn’t the money go into cash? Yet observers should not have been startled by this development. In Britain in the early 1850s, Exchequer Bills effectively offered negative rates. The convenience of those paper instruments gave them higher value than stacks of gold coins, just as today the convenience of electronic ledger balances is worth something compared to having to handle containers full of banknotes.

The Exchequer Bills episode is just one minor finding from recent studies that integrate data from the ledgers in the Bank of England Archive with price reports, press coverage, and other sources. Previously unknown statistics about completeness of price reports, turnover rates, and dealer activity have been obtained. It has also been found that the London Stock Exchange was a key part of the “shadow banking system” of the time.

Aside from statistics, we can also obtain some qualitative insights about modern finance from these investigations.  Our basic laws and institutions are clear linear descendants of those created at that time.

If some of those early Victorians were to come alive today, they would have no difficulty recognising all the modern financial instruments and services, although they would surely marvel at such concoctions as CDO squareds. Many current concerns would be familiar to them as well. While they did not talk about climate change, they did worry about natural resource depletion, and the effects of globalisation.

Inequality was even greater than today. Deflation and the analogue of our “Great Savings Glut” were visible, and seemed natural. The terms secular stagnation and liquidity trap had not yet been invented, but they corresponded to widely held attitudes.

Although the financial system was far smaller than today, public opinions about it were not dissimilar. Respect was often mixed with fear and loathing, as in an 1850 magazine article that called the London Stock Exchange “an institution destitute of moral principle, but at the same time omnipotent in its influence upon the moral and social condition of nations.”

So what would surprise those early Victorian observers the most, were they to come alive today? One candidate would surely be our touching acceptance of financial innovation as socially productive. Another would be our faith in central planning, in the presumed ability of policy makers to ensure smooth and steady growth. The Minsky Instability Hypothesis would be regarded as obviously true. What we find in the 19th century are opinions, such as that of The Times, that crashes occur about once a decade, and that they lead people to “the reflection that they are at least the wiser for it, that they will not be taken in a second time,” and yet “the next fit comes on them like the rest, and they go through all the stages of the disease with pathological accuracy.”

The Efficient Market Hypothesis would seem to the early Victorians as amusing, but a fantasy. They understood that some semblance of efficiency could be achieved, but only through diligent efforts of experienced traders. And even those traders could not always control market irrationalities, and were themselves subject to limitations of groupthink.

Perhaps the greatest and hardest to accept surprise in modern markets would be the combination of high equity prices and low long term interest rates. Today’s commentators regard this as natural, and keep reassuring investors that low interest rates help sustain record-high corporate profits, which justify the high share prices.

There is certainly evidence that in the short run, low interest rates do boost profits. But on a long scale, basic economic logic says that interest rate and profits should move the same way. After all, bonds and equity are just different ways to fund ventures, and interest and profits are the cost of capital. There is a difference between the two, reflecting different risks.  But there should be a strong positive correlation.  And that is how the early Victorians thought about it.  The theoretician Robert Hamilton wrote about it in the 1810s.

So did James Morrison, one of the richest merchant bankers of that era, in the 1840s. And so did others. Were they to come alive today, they would surely be astounded. They would wonder why, if Lloyd Blankfein, the head of Goldman Sachs, was indeed “doing God’s work,” was he not mobilising all that low-cost money lying around in order to compete away the extravagantly high equity returns?  And they would surely conjecture that once capitalism started working properly again, this anomaly would disappear, and either bond or share prices (or both) would crash.

Andrew Odlyzko has had a long career in research and research management at Bell Labs, AT&T Labs, and most recently at the University of Minnesota, where he built an interdisciplinary research center, and is now a Professor in the School of Mathematics.  He has written over 150 technical papers in a variety of of fields, and has three patents.  In recent years he has also been working in electronic commerce, economics of data networks, and economic history, especially on diffusion of technological innovation.  More information, including papers and presentation decks, is available on his web site, http://www.dtc.umn.edu/~odlyzko/.