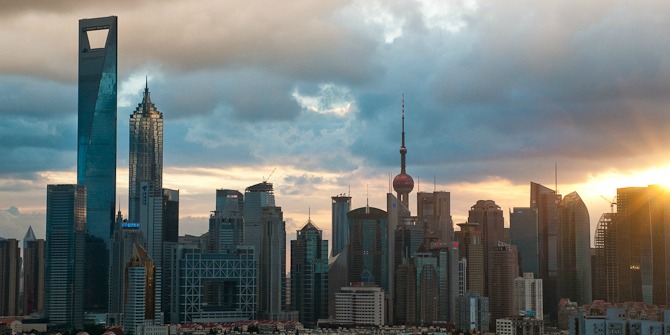 Lujiazui Finance and Trade Zone, by Suvcon, under a CC-BY-2.0 licence

You probably know that many new rules were put in place soon after the 2008/2009 financial crisis in order to prevent excessive risk taking and ethically questionable transactions by the financial sector. Did the banks follow the rules? The obvious answer would be yes, at least for many people. Banks are supposed to operate based on trust, and there is no simpler way to weaken trust than to break rules that are designed to make the banks safe and fair transaction partners. Also, banks are heavily regulated, and if they break rules the state can simply tell them that they are no longer allowed to do business. But the obvious answer is not the true answer. In 2014, banks in US and Europe paid $65 billion in fines for breaking rules (much of the rule-breaking had victims, often individuals); in 2015 the US state reported that many banks still did not meet capital requirements for safe operations.

So what is going on? And, is such rule-breaking special for banks, or for US/Europe, or does it also happen in other places and industries? Organizations breaking rules has actually been of interest to researchers for a long time, with one of the earliest studies finding that municipalities in the US took more than 35 years to follow state rules that require reorganization to make municipal governance more fair and democratic. So, even public organizations can break state rules. Given the financial crisis and many other examples of firms not following rules, research on rule-breaking has increased, and the evidence shows that we cannot take rule-following for granted.

In our research, we looked at a rule set by the Chinese state in 2005 that required firms listed on the stock exchanges to reincorporate with a single class of shares if they had split-share ownership. Split-share ownership in China meant that the firms had separate share classes for private and public owners, and was a legacy of the privatisation of state firms giving state (or province) ownership special rights. It was widely seen as putting breaks on economic development, and the state made the reincorporation rule in order to complete the policy of market transition and improve economic growth. A problematic domestic stock market and successful Chinese firms fleeing to overseas markets for their stock listing were clear signs that a rule change was needed to improve stock markets and firm governance.

If Chinese firms also delayed rule compliance, we would know that such delays are not only seen in the US and Europe. This would be particularly interesting because the Chinese state is not known to react mildly to rule-breakers, especially if the rule-breaking holds back an important state initiative – like the market transition.  If we could investigate what firms delayed the most, we would also learn something about how firms make such risky decisions.

So what did we find? Many firms followed the rule quickly, within 18 months. But by 2012, there was still a minority of firms with remaining split-share ownership, against the rule. This form of rule-breaking was not concealable, of course: the state knew exactly how firms were incorporated, and even invited rule-breaking firms to repeated “encouragement sessions” where regulatory agents told them they needed to follow the rules. The slow rule followers clearly were special. We found that firms that were slow rule followers typically had a low proportion of public shares, so they may have concluded that they would not be prime targets of enforcement. Also, they had ties to the state through their board members, so they may have known more about the planned rule enforcement. To put it simply, firms break rules when their executives think the risk of punishment is lower.

This research tells us more about when firms decide to follow rules, and when they delay – and also when they follow the rule completely, and when they adapt it to their own needs. Rule-following is a strategic choice, not a routine, and firms are more likely to be slow in adopting new rules, or even to break rules, if their leadership thinks they can get away with it.

Cyndi Man Zhang is an Assistant Professor of Strategic Management at Singapore Management University. She studies power struggle and coalition building during policy diffusion, sources of myopia in strategic decision making, and the firm’s repairing strategy after disclosure of misconduct.