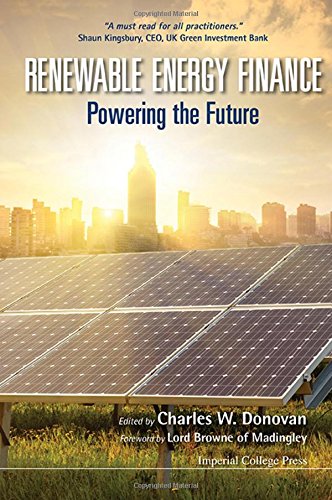 Climate change stands as one of the most foreboding challenges facing humankind. Renewable energy integration is essential to solving this puzzle, but the deployment of less-mature renewables is hamstrung by many issues – especially financing. Any contribution that can shed additional insight on this topic, whether through soberly assessing barriers to success or proposing potential innovations, is surely a welcome addition to the literature.

Renewable Energy Finance: Powering the Future, published by Imperial College Press, is just such a text. It opens with a helpful introduction from editor Charles W. Donovan, which includes key definitions for individuals still building their finance vocabulary before moving on to some of the most critical concepts to consider within this area. The entire text, with the exception of a few eye-glaze-inducing sections, is quite readable (perhaps reflecting the inclusion of many practitioners in its author list), and can be moved through with relative ease. Familiar mainstays that have steered existing renewables investment – including project finance, private equity and the role of government policies – all make an appearance, but so too do forays into lesser-known areas like crowdfunding, the carbon delta of investment performance and ways to get more capital into the sector from the institutional investors who hold the bulk of it.

It is this latter topic on the needs of institutional investors, such as pension funds, insurance companies and sovereign wealth funds, to which I will turn first. These investors, with funds that can run into hundreds of billions of dollars, face certain hurdles that must be overcome before more of the money they control can be put to work in the service of building our renewable energy supply. Some barriers to their leadership are internal. For example, large institutions appreciate defined asset classes but renewable energy does not fit neatly into any single category. Private investments in renewables could be under private equity, infrastructure or even real estate; on the public side, equities, fixed income and commodities are all options. Where is one to begin? This fosters a situation where, lacking a clear ‘home’, renewables are less likely to be driven by any in-house champion.

Other barriers are external. An investment from an institutional investor will not facilitate renewable cost declines (and future increases in renewables investment) if it goes into things like equity security purchases. Smartly, the text addresses the all-important question of whether institutional investor interest in the sector can bring down the cost of capital. Three potential avenues for investment exist – pooled investment vehicles, corporate-level and direct investing – with the latter holding the most potential for these declines. Progress will be dependent on two things, as author David Nelson of the Climate Policy Initiative reasons. First, ‘the institution typically needs to be actively involved in structuring the project, so that the cash flows they receive from the asset match the institution’s long-term liabilities’, which will allow for overall portfolio risk to decline. Second, ‘there must be enough competing potential investors’ who can drive down the cost of debt when offering project finance terms.

Private equity also receives coverage. Brian Potskowski and Chris Hunt, two members of the elite group Riverstone Holdings, provide a tidy overview of the market range that the term ‘private equity’ encompasses – from venture capital to infrastructure funds. They describe private equity as much-needed ‘patient’ capital looking to unlock hidden value, making it a useful contribution to a corporate world that is all too often focused on the short-term. To achieve their goals, private practitioners use a mix of qualitative and quantitative valuation approaches in preparation for their firm’s all-important exit. Going forward, the authors foresee a bright future for the industry, even as they frown on policy shocks and are concerned about the potential for ongoing structural disruption in the renewable energy space.

So what are some lessons that investors (and the governments linked to them) can absorb from this work? For one, stability is key. No less than four of the chapters mention the retroactive renewable electricity subsidy cuts in Spain and the negative implications that this move by the cash-strapped Spanish government has had on investor confidence. Clearly, delivering on what was promised will be crucial.

Second, achieving scale is also essential. The aforementioned institutional investors, many of whom hold the bulk of their profiles in liquid and competitively priced equities and fixed income securities (e.g. CPP Investment Board), will need things like Master Limited Partnerships and Real Estate Investment Trusts to become more renewables-friendly. Finally, and related to the second point, innovation is important. The book touches on crowdfunding and solar PV leasing: more of this orientation of mindset is necessary for renewables to reach their full potential.

This text does not succumb to the uncritical bullishness that sometimes mars other renewables books, as it explicitly and implicitly acknowledges that those working in the sector still have much to do. Renewables are starting from a very low base, and will require enormous investment before they can put a marked dent in their carbon counterparts’ dominance. No better example of this uncomfortable (but inescapable) fact exists than in the foreword by Lord Browne (of British Petroleum fame), who points out that ‘when I became CEO of BP in 1995, just over one percent of the world’s electricity was generated from renewable sources […] thanks to the rapid declines in the cost of technology, that figure doubled over the twelve years that I led the company, and it has doubled again in the eight years since I left.’ To move beyond this amount of four per cent (which is presumably only non-hydro renewable electricity) will require an as-yet-unfound political will.

But there is also enormous opportunity here. The drivers behind renewable integration, such as environmental issues like air pollution and climate change, the technical benefits that come from integrating certain levels of renewable energy supply and increasingly attractive price points are not going anywhere and, at least in some cases, are moving ever more in favour of renewable energy. Finance is essential to making sure that the potential for this sector is realised; accordingly, this reviewer heartily recommends that, regardless of your background, you read this book to really get a grasp of the cutting-edge of climate finance.

Joel Krupa is a member of the University of Toronto’s Institute for Sustainable Energy, and holds degrees from the University of Oxford, the London School of Economics and the University of British Columbia. He holds visiting research fellowships from the Oxford Institute for Energy Studies and Imperial College Business School. He has several years of strategic advisory experience in the private sector (real asset development, consulting and private equity), and spent a year crafting policy in a government role. He has presented on various energy issues at many conferences and events across North America, and has conducted analyses on energy issues from four different continents.