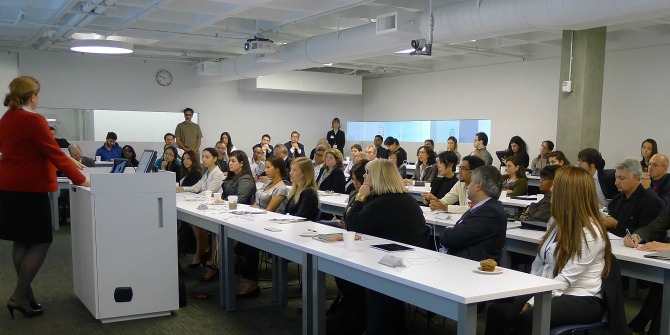 The burgeoning economic inequality between the richest and the poorest across the world is a cause of concern for social, political, and ethical reasons. In 2016 the Oxfam Davos report revealed that 62 people only own the same as half of the world, representing an increase of 38 per cent or 1.76 trillion dollars from 2010. Despite this, the university education and management schools in particular, have largely neglected to reflect on how they themselves may be contributing to the growth of inequalities.

Elsewhere (Fotaki and Prasad, 2015) we have argued that this is due to an absence of sustained critique of the dominant business models and how various established business practices might contribute to exacerbating inequalities. Robert Reich, the leading US academic and former Democratic Labor Secretary, argues that Harvard Business School is directly responsible for inculcating into its students ideas and values that have lead to a yawning gap of earnings between CEOs and ordinary workers, which has grown from 20-to-1 some 50 years ago to almost 300-to-1 today.

Far too many educators rely on orthodox economic perspectives — often represented by neoliberal capitalism —which have dominated the curricula and the teaching philosophy of management schools. This uncritical acceptance of neoliberal capitalism precludes both the possibility of a meaningful critique and the emergence of alternatives. It also teaches students they must act as rational profit maximizers untainted by the ‘facts of human life’ such as ageing, disease and death (see Money-Kyrle, 1978 quoted in Fotaki, 2016) that make the reliance on the other necessary, in order to succeed.

For instance, the election of topics that lionise the lone-hero entrepreneur, who is disembodied — though tacitly assumed to be male and white — and disembedded of the social context, leads to undervaluing social connectedness and relatedness. Management teaching regularly ignores the less glamorous work of caring or the collective production of public good while the impact of business activities on the lives of “others” in distant locales is rarely considered outside of social corporate responsibility modules.

Finally, wrongdoing in business is a matter of transgression by corrupt individuals – a few proverbial bad apples – rather than an outcome of structural incentives. This is despite the bailouts of the banking sector causing global recession forced on the tax-payers, and despite the loss of revenue hidden by the wealthy individuals in tax havens amounting to at least 18.5 trillion dollars worldwide.

In disregarding these issues the management education reifies the pre-existing inequalities. But it might also contribute to their worsening once the wealthy are able to influence the political process for their own benefit and obstruct or reverse the social progress where it has been achieved (e.g. by privatizing public education and health services).

Rather than acting as cheerleaders for big business the educational establishments teaching economics, and management specifically, must critically examine the relationship between neoliberal capitalism and inequalities in order to regain their social purpose. This, among others, can be achieved by broadening topics and insights outside neoclassic economics to include sociology, historical and political analysis along with transnational cultural perspectives explaining multiple impacts of globalisation.

Management educators, specifically, should re-engage their students with issues they can relate to in their pedagogical practice. I propose a teaching methodology derived from the psychoanalytic concept of relationality, inspired by the work of philosopher and activist Judith Butler, as a way of developing conceptual and reflexive tools by which to reimagine management school education. This, I argue, is an essential step for rethinking the role of education and for creating a space to debate important questions about taken-for-granted but problematic assumptions underlying the ideology of neoliberal capitalism.

Butler uniquely draws on the continental philosophy of Levinas and Lacanian psychoanalysis to elucidate how precarious lives depend on society for survival (Butler, 2009). Her theory of the human as a relational and social being, who craves recognition by others, allows us to appreciate the influence of social norms on how we think and feel about ourselves in the world.

Butler’s reframing of subjectivity in relational terms has important implications. First, it explains why and how it is only through relating to others that we gain a sense of value and significance. As the eminent psychoanalyst Irvin Yalom argues, ‘living through the others’, in addition to giving meaning to our life in the present, allows us to deal with the existential fear of death and our own mortality (2009).

Second, Butler helps us to consider the ways in which we are all inextricably linked to others and to all lives because our own lives are inevitably precarious (Butler, 2004). Our shared vulnerability therefore obliges us to assign irreducible value to human lives.

Third, such relational engagement accounting for the risk of injury, violence, and privation we might all experience under the precariousness-inducing neoliberal capitalist regime has political implications: it makes explicit the role of governments, public institutions and educational establishments in how people understand, treat, and relate to one another.

Marianna Fotaki is Professor of Business Ethics at the University of Warwick’s Business School. She holds degrees in medicine, health economics, and a PhD in public policy from the London School of Economics and Political Science. Before joining academia in 2003 she worked as a medical doctor in Greece, China, and the UK, as a volunteer and manager for humanitarian organizations Médecins du Monde and Médecins sans Frontiers in Iraq and Albania, and as the EU senior resident adviser to governments in transition (in Russia, Georgia and Armenia). Marianna is at present a Senior Editor for Organization Studies, and co-directs pro bono an online think tank Centre for Health and the Public Interest, a charity that aims to disseminate research informing the public and policy makers. Marianna was a Network Fellow at the Edmond J Safra Center for Ethics, Harvard University, in 2014-2015.