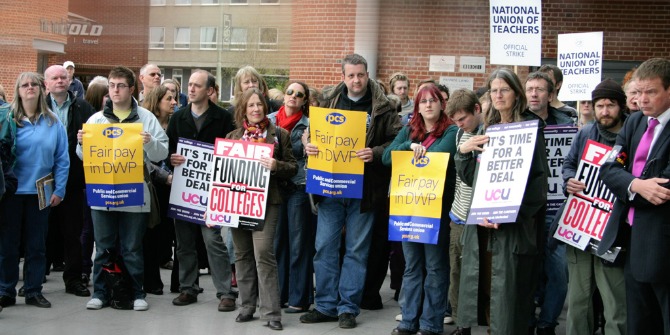 Teachers, college lecturers and DWP staff on strike, by Roger Blackwell, under a CC-BY-2.0 licence

When we think about trade unions there are various images that come to mind. Normally these relate to forms of collective action and strikes, the late night negotiations with employers over pay increases, and the political role they play as in the current internal Labour Party debates.

Whilst things have changed, there are views which do not always capture the way trade unions evolve and engage. There are also absences in understanding the changing culture and social aspects of trade unions as spaces where individuals engage and mutually learn from experience and discussion.

That people’s lives are changed by such engagement and that, to varying degrees, trade unions are networks of individuals and groups linked to broader communities is rarely discussed. The fact that in addition to their formal, conference policies and actions they are cultural spaces is something that those not researching on and/or working with trade unions do not acknowledge or realise. Yet for many individuals the link to the union is much more of a lived and cultural experience.

As stated, there is much said about trade unions in terms of their relevance. Given the changes taking place in terms of the continuous nature of economic uncertainty (pre- and post-Brexit), the decline of stable work, the emergence of highly unstable and precarious forms of employment, and a greater degree of work intensification, we are being told by the media and the ‘policy community’ that trade unions are not suited, or are unable, to keep up with this moment of chaotic capitalism.

This is partly due to a model of trade unionism which, during the twentieth century, was leaning towards a more organised and coordinated relation with employers and the state at a time when economic structures and relations were clearer – to some extent.  Planning and long-term negotiation – even in a more market and voluntarist model such as that of the UK – allowed for a greater political and regulatory influence from unions. Leading academic journals such as the British Journal of Industrial Relations or Work, Employment and Society, and the Industrial Relations Journal have been documenting the changes for some time. An entire generation of debate on questions of decline has emerged since the mid to late 1980s (perhaps before in some cases) and academic careers build around these themes and narratives.

However, the resilience of trade unions and their ability to respond to change has been equally noted not least through the work of labour and employment relations academics such as Carola Frege, Ed Heery, John Kelly, and Lowell Turner, amongst many who study questions of trade union revitalisation and renewal. Trade unions have begun steadily to look at new ways of championing the ‘outside’ worker – ‘self-employed’ taxi drivers, the unprotected/under-represented in the large population of cleaning workers and a range of new mega-warehouse workers lost in the satanic spaces of large retail and logistics corporations.

This is being undertaken through new forms of living wage campaigns, publicity campaigns focusing on the new forms of work exploitation, the use of local community-based strategies and alliances, and social media strategies that link and highlight struggles. Both the traditional and newer trade unions and trade union networks have responded through highly innovative strategies, perhaps to variable degrees. For example, community-oriented trade union strategies have been used to link to a broader coalition strategy with civil society groups as, for instance, pointed out by the work of Jane Holgate, Jo McBride or Jane Wills amongst others.

Whilst trade union strategies regarding less stable and ‘insider’ groups of workers have not always been consistent – as in the case of migrant workers and large groups of female workers – there have been shifts for some time in the general orientation of their organisational roles. There is a greater attempt in various cases to move beyond the workplace in terms of strategic focus and organisational structure – such as the location of union meetings or the use of meetings.

It is noticeable that trade unions can be important personal reference points rather than simply a buffer or defence – or legal ‘insurance scheme’, even – against the challenges of our ever-changing work and the behaviour of management. Trade unions do offer new roles, which is the subject of increasing study within labour and employment relations. For example, there is a wide engagement with trade unions as learning spaces that provide access to a range of supports, from technical skills through to social and personal development, although recent restrictions on state and public funding for some of this type of work has questioned the further development of this. Nevertheless, learning has continued to be a major means by which trade unions provide more supportive and innovative spaces for their members and workers.  The work of Jason Heyes, Sian Moore and Mark Stuart in the UK, and others, has been central to these discussions.

The point is not about being an endless optimist, or someone who does not realise the political and personal tensions around these issues and within trade unions.  Quite the contrary: these are all contested terrains and are subject to different approaches and trade union views.  There are very real tensions in terms of internal organisational trade union changes and restructuring in many cases.

Yet, we find that many of the more innovative developments are not always acknowledged beyond the realm of the study of labour and employment relations. Trade unions remain misrepresented by the media and by various academics not involved in the study of work as employment. Within this, the notion of community is key – not solely as a strategy linked to social coalition building, but also as a new way of looking at social and personal supports and networks within work, and within and around organised labour.

Trade unions and broader sets of workers’ representation can be cultural spaces. The use of cinema, theatre and reflective discussion is important to the way debate and understanding can be developed, as in the National Union of Journalists’ use of a film season in Greater Manchester to enliven discussion and engagement across different sets of journalists and media workers.

We have witnessed the evolution of activist networks, such as Black Activists Rising Against Cuts, which have a considerable trade union input and configure strategies around culture and resistance, as well as using traditional campaigning techniques. The National Shop Stewards Network tries to connect worker representatives across and between workers and sectors so as to create general politics of personal resilience and collective learning.

These are all examples of networks of support and assistance using new lateral ways of creating dialogue. The importance of trade unions – for all their political differences and tensions – in creating spaces for personal support and dialogue between members and workers more generally, informally and through social spaces.

This role is one that is becoming increasingly important be it through trade union social strategies, organisational activities and moments of mobilisation. A politics of mutual support, friendship and understanding amongst workers can emerge and allow more informal dialogue to develop. This means that, within workplaces and in communities, trade union and worker collectivism as a social space are important for generating a genuine basis or dimension – perhaps not in isolation – for seeking new solidarities which are meaningful in how they change perspectives and lives.  That suggests we need to broaden our view of how the ‘traditional’ forms of representation can sometimes renew themselves as spaces and experiences for genuine personal resistance, hope, and mutual support between workers.

Miguel Martínez Lucio works at the University of Manchester (Alliance Manchester Business School) and is a UCU & UNITE member. He has an ongoing interest in the changing patterns and politics of regulation and representation in relation to work and employment.  Much of his work is comparative in nature. He studied Politics at Undergraduate and Masters level at the University of Essex and received his doctorate from the University of Warwick in Industrial Relations.