Office politics: When managers flatter the CEO, but undermine him with journalists

Office politics: When managers flatter the CEO, but undermine him with journalists 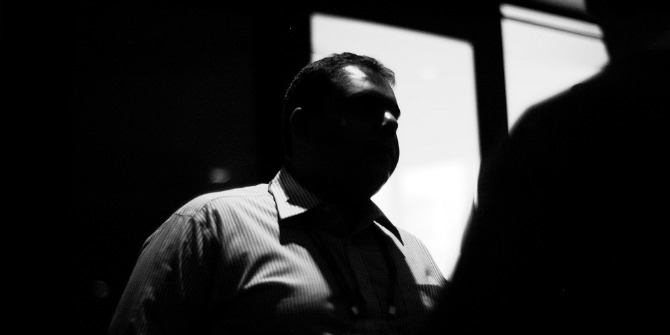 Top managers of large companies are often called upon by journalists and other market observers to comment on their CEO’s leadership and strategy. Negative commentary is seen as particularly credible, and can significantly influence the tone of the subsequent press coverage about the CEO. However, should negative commentary from insiders be treated as an objective source of information about the chief executive?

Our recent research offers caution – we identify an important internal political factor that can distort evaluations of the CEO, ironically causing managers to make negative comments about him/her to journalists, despite the managers being positive to their boss’s face.

There is continued pressure on top managers to build and maintain their relationship with the CEO. Ingratiation has been shown to be a particularly common way that they achieve this; managers may flatter the boss with compliments, or they may agree with his/her opinions in order to strengthen their relationship. However, while these comments may increase the CEO’s liking of the manager, we suggest why it may cause the manager to start resenting the boss.

Resentment is a feeling derived from perceived unfairness in social exchanges – if we think someone is benefiting at our expense, we start to resent that person. While the CEO may enjoy the ingratiation – almost everyone likes being flattered – the experience is less pleasant for the manager undertaking the ingratiation. Indeed, we find evidence that ingratiation poses a threat to the managers’ positive self-regard, and that they attribute the cause of this esteem-threatening behavior to the CEO, causing them to start resenting him/her.

We suggest three interrelated reasons why ingratiation may threaten the managers’ positive self-regard, leading them to resent the CEO:

Thus, given most people have a desire to view themselves as an authentic, independent person who succeeds by virtue of talent and hard work, we suggest that ingratiating the boss risks damaging the managers’ positive self-regard, leading them to resent him/her.

One opportunity that the managers have to bring harm to the CEO is by making negative comments about him/her in their communications with journalists. Indeed, there are strong parallels between the manager’s ingratiation and this form of harm: just as ingratiation affirms the CEO’s leadership capabilities and strategic judgment, negative statements to journalists about his/her leadership disconfirm these capabilities. In addition, to the extent that managers perceive ingratiation and the pleasure it brings the CEO to be undeserved, they may feel particular satisfaction at the thought of the his/her displeasure upon receiving less-than-positive press coverage.

What is of course interesting with these findings is that the CEO may be completely unaware of the weakened support from management. Journalists typically withhold source names, so the CEO may have a hard time identifying the source of the negative commentary – why would they question the loyalty of managers who are saying nice things to their face?

This problem may well extend far beyond the immediate impact of the negative commentary from journalists that we examine. While positive communication such as flattery tend to be relatively overt, resentment lies below the surface, and social undermining occurs behind the scenes. As such, a chief executive may overestimate the support of the top managers – one day those very same managers who he/she thought were being supportive, agreeing for example with strategic decisions, may suddenly be advocating for the boss’s replacement.

We also find some remarkable parallels in the differences in how ingratiation impacts the social relations of the CEO as compared to the ingratiating managers. Not only are the ingratiating managers likely to develop a more favourable relationship with the boss, but the CEO is also more likely to recommend the managers for prestigious board positions, furthering their broader reputation. In comparison, resentment may damage the CEO’s relationship with the ingratiation managers, and their social undermining of their boss with journalists is likely to damage the CEO’s reputation with the broader business community.

This all goes to show that politics inside organizations can influence external reputations. Negative commentary from a company insider – something that on the face of it seems a pretty objective source of information – can be distorted by the manager’s resentment towards the CEO. Compliments from top managers may bring bad news for the CEO!

Gareth Keeves is a doctoral candidate in strategy at the Ross School of Business, University of Michigan. His current research interests include impression management and impression formation in the context of corporate leadership.

James Westphal is the Donald C. Cook Professor of Business Administration, Professor of Strategy, and Chair of Strategy at the Ross School of Business, University of Michigan. His current research interests include corporate governance, symbolic and institutional processes, social influence, and corporate elites. He received his Ph.D. in organization behavior from Northwestern University.

Michael McDonald is an associate professor in the Department of Management at the University of Texas at San Antonio. His research focuses on the social networks of executive leaders and how they influence organizational-level outcomes, including organizational strategy and performance. He also studies factors that influence the effectiveness of boards of directors. He received his Ph.D. in management from the University of Texas at Austin.