People reduce their participation in the stock market after a case of corporate fraud in their state, write Mariassunta Giannetti and Tracy Yue Wang 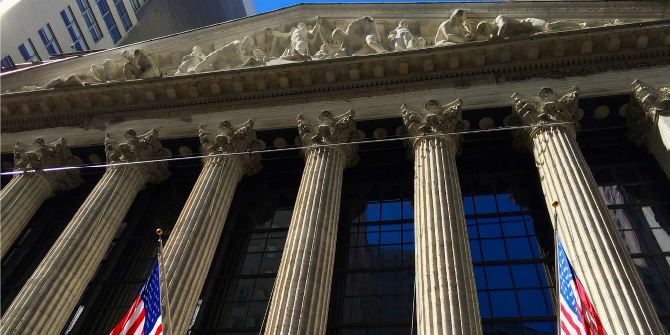 Besides inflicting losses to shareholders, corporate fraud may also have indirect effects on people’s willingness to participate in the stock market, which may generate even larger losses by increasing the cost of capital for other firms. Evidence of the externalities generated by corporate fraud, however, is quite limited.

In our paper, we explore the effect of corporate scandals on the demand for equity and the willingness of households to participate in the stock market (directly or indirectly).

People are likely to be more exposed to corporate frauds committed by firms headquartered in the state where they live. This is the case not only because they tend to hold the stocks of local firms and are likely to experience losses in their stock portfolios, but also because coverage of local news or personal interaction increase their exposure to these episodes.

We ask whether people reduce their stock market participation following corporate scandals in the state where they reside (controlling for nationwide macroeconomic conditions and capturing asynchronous local shocks with a host of household and state level controls). We find unambiguous evidence that the answer is ‘yes’.

One may wonder to what extent our findings are driven by state level economic conditions that are associated with both the revelation of corporate fraud and household stock market participation. For instance, the revelation of fraud generally occurs at the beginning of economic downturns that may independently drive people’s decision to reduce their equity holdings (Wang, Winton and Yu, 2010). To establish a causal effect of corporate scandals on local households’ stock market participation, we use two different strategies.

The first strategy utilizes a shock that is unrelated to state fraud detection: the sudden demise of a large auditing firm, Arthur Andersen, in 2002. All Arthur Andersen’s clients were forced to change auditors. Since new auditors have incentives to “clean the house”, the firms that switched to them had higher a probability of being revealed as having committed fraud (Dyck, Morse and Zingales, 2013).

The second identification strategy exploits within-state variation in people’s life-time experience of corporate scandals. Even people living in the same state at a particular point in time can have different corporate fraud experiences depending on their age and because they may have moved across states. In these specifications, we are able to absorb any state level shocks by including interactions of state and year fixed effects, and continue to find that the variation in households’ fraud experiences has a negative impact on their stock market participation.

Both identification strategies indicate that fraud revelation has a causal impact on stock market participation. Two mechanisms could drive this effect. First, the knowledge of fraudulent events may undermine trust in the stock market and drive people to rebalance their portfolios away from equity. Second, fraud revelation could affect state economic conditions (e.g., by increasing uncertainty about future employment and income) in a way that makes people rebalance their portfolios towards less risky securities.

The second identification strategy exploiting within-state heterogeneity implies that our findings are not driven by the fact that fraud revelation reflects or causes deterioration in state economic conditions, as these should affect all individuals in the state, independently from their past experiences. There is also no evidence that fraud revelation in a state predicts future fraud revelation or deterioration in economic conditions in the state. We also find that naïve households are more affected, and that people react to fraud revelation in the state differently from institutional investors. Taken together, our findings suggest that corporate fraud affects stock market participation by undermining people’s trust in the stock market.

Importantly, fraud revelation leads to a decrease in the number of retail shareholders in the state and a (temporary) decrease in the valuation of firms that have not been revealed having committed fraud, but are headquartered there.

Consistent with a negative demand effect caused by corporate fraud, the decrease in valuation is more pronounced for firms with less geographically dispersed activities and less institutional ownership. They may have to offer higher returns to attract other shareholders, replacing local households.

Following fraud revelation in the state, non-fraudulent firms tend to repurchase their shares and local mutual funds tend to increase their holdings in these firms. Thus, our results are unlikely to be driven by an increase in the probability that other firms in the state have committed fraud or by changes in state economic conditions.

Mariassunta Giannetti holds a Ph.D. in Economics from the University of California, Los Angeles and completed her B.A. and M.Sc. at Bocconi University (Italy). She is a professor of Finance at the Stockholm School of Economics; she is also a CEPR research fellow in the financial economics program and a research associate of the ECGI. Professor Giannetti has broad research interests in corporate finance and financial intermediation. Her research is published in leading journals in Finance, Economics and Management. Professor Giannetti has been serving as associate editor of several journals, and is a director of the European Finance Association. She has been honoured as a rising star in finance in 2016 and has received numerous research awards.

Tracy Yue Wang is an Associate Professor in the Finance Department at the Carlson School of Management, University of Minnesota. She is also an Expert Consultant for the U.S. Securities and Exchange Commission. She received her Ph.D degree in Finance from University of Maryland and Master’s degree in Economics from Ohio State University. Dr. Wang’s research interest lies in law and economics, securities market regulation, corporate governance, and behavioral finance. Her research has prominently contributed to the understanding of the economic effects of various securities market regulation on publicly traded companies. Her research has been published in top tier business journals. Dr. Wang’s research has also won Best Paper Awards at major international finance conferences multiple times.