They pay higher valuations due to their lower social status rather than social network disadvantages, write Jing Zhang, Poh-Kam Wong and Yuen-Ping Ho

Do ethnic minority investors behave differently from more mainstream investors? This study on venture capitalists (VCs) in Silicon Valley over the period 1976-2004 found that they were, perhaps unsurprisingly, more likely to invest in immigrant Asian entrepreneurs than mainstream VCs. What is surprising, however, is that when Asian venture capitalists did invest in mainstream ventures, they paid higher valuations than mainstream VCs, even though the reverse is not true: mainstream VCs did not pay higher valuations compared to Asian ones when they invested in Asian ventures. These asymmetrical findings suggest the “premium” that Asian VCs have to pay to compete in the mainstream venture market is due to their lower social status rather than their social network disadvantages.

Silicon Valley accounted for 47 per cent of total US VC investment in 2015, up from around 33 per cent at the height of the dot-com boom during 1999 to 2000. There are more than 30 professional and networking associations targeting immigrants in Silicon Valley, composed of more than 33,000 members.

Asian entrepreneurs featured prominently among foreign-born entrepreneurs who started ventures in Silicon Valley, with close to 21 per cent of all entrepreneurial founders being immigrant Asians. Among them, Chinese and Indians comprise the largest and fastest-growing Asian ethnic groups. Indeed, the development of ethnic professional networking organisations in the 1990s (e.g., Monte Jade for the Taiwanese, TiE for Indians, and Hua Yuan for Mainland Chinese) and the emergence of new successful role models were likely to have accelerated the entrepreneurial pursuits of these two groups of immigrant Asians in Silicon Valley. At the same time, there has been a growing presence of VC funds that are run by general partners who are Asians, particularly Chinese and Indian entrepreneurs who founded and successfully exited the first wave of Asian-led high-tech ventures in Silicon Valley in the 1980s. This study has therefore chosen to focus on the behaviour of these two groups of Asians.

The role of minority entrepreneurs has received much public attention in recent years. In contrast, little is known about the role of minority venture capitalists (VCs). Using data from Dow Jones VentureSource, this paper set out to compare the investment behaviour of Asian VCs (Chinese and Indian) versus mainstream VCs (white Caucasian) in Silicon Valley from 1976 to 2004.

Table 1. Number of deals, mean, and standard deviation of pre-money valuation (US$ million) for first-round investment

In Table 1, comparing Groups A and C, 54 per cent (=42/(42+36)) of the Asian VCs’ funds went to Asian-led ventures. Meanwhile only 12 percent (=139/(139+984)) of the investments by mainstream VCs went to Asian-led ventures, as seen in Groups B and D.Table 1. Number of deals, mean, and standard deviation of pre-money valuation (US million dollars) for first-round investment

Table 1 also shows that the mean pre-money valuation by Asian VCs in mainstream ventures (Group C) seems higher than that in any of the other three groups, which appear to have similar levels. Pre-money evaluation is operationalised as the difference between the amount of money received by the venture in its first funding round and the post-money valuation of the venture after the injection of investment from VCs during the first funding round. In addition, the pre-money valuations by Asian VCs are significantly higher than by mainstream VCs when investing in mainstream ventures (i.e., Group C is larger than Group D), but mainstream VCs do not offer higher valuations than Asian VCs when investing in Asian-led ventures (i.e., Group B is not larger than Group A).

The above findings were found to remain valid when they were tested using more robust regression analysis that control for a wide range of factors, including the effects of VC size, VC experience, funding environment, time period of funding, and industrial sector.

The results of this study suggest the need to take into account both the advantages and disadvantages of using co-ethnic ties to make investment. In essence, ethnic investors are driven by two competing forces when funding co-ethnic entrepreneurs.

On the one hand, an ethnic social network reduces information asymmetry and increases trust and solidarity between entrepreneurs and investors; ethnic investors would then have a higher ability and, hence, likelihood to invest in co-ethnic entrepreneurs compared to non-ethnic investors.

On the other hand, according to social status logic, a high reliance on ethnic ties may lead to a vicious circle, whereby ethnic investors’ lower social status as an immigrant community will be reinforced, thus constraining their ability to compete on equal footing in the mainstream business world. To break out of this social status constraint, ethnic investors would have to pay a premium when they do invest outside their ethnic networks. In contrast, mainstream investors do not pay a premium above what is paid by Asian investors when they invest in Asian ventures.

Does it pay off for Asian VCs to invest in mainstream ventures? Table 2 below suggests that Group C did not outperform the other groups. Instead, Groups B and D seemed to outperform Groups A and C. This indicates that mainstream VCs’ investment performance was better than Asian VCs in both Asian-led and mainstream ventures. Although it is hard to judge whether VCs picked winners or built them, the data at least to some extent rule out the alternative explanation that Group C was composed of better quality ventures worthy of higher valuation.

Table 2. Proportion of IPO or acquired ventures in each group 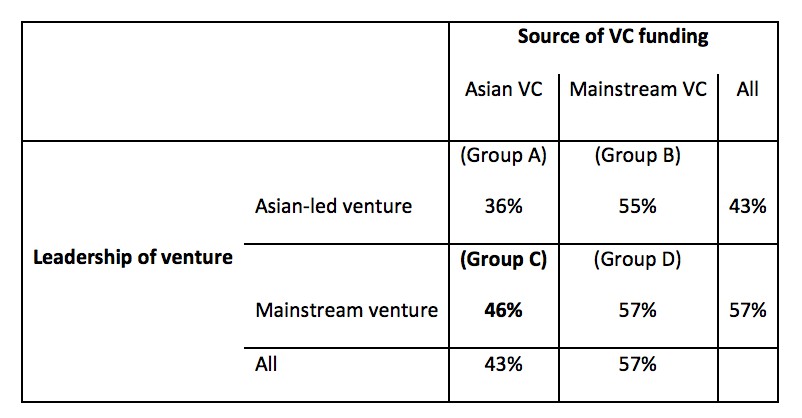 By offering fresh insights on the roles of immigrant investors, this study seeks to contribute to the growing literature on ethnic entrepreneurship and hopes to inspire more work to shed light on an important actor – immigrant investor – that has hitherto been under-researched. The study is also timely in the light of the recently announced US presidential executive order on immigration that blocks entry to the U.S. for citizens from some countries, which has received very strong reaction from executives of high-tech companies in Silicon Valley. This and similar political developments in some European countries are certain to re-ignite the debate on the roles that immigrants play in the economic and social development in the host country.

Poh Kam Wong (pohkam@nus.edu.sg) is Professor at the NUS Business School and Director of the NUS Entrepreneurship Centre, where he spearheads the university’s experiential entrepreneurship education programs and assists CEO of NUS Enterprise in overseeing the NUS StartUp Runway, which provides incubation space, seed funding and mentorship for start-ups by NUS students, professors and alumni. He obtained two BSc.’s, an MSc. and a Ph.D. from MIT. He has published extensively in leading international refereed journals on entrepreneurship and innovation (Google Scholar Citations count 8934, H-Index 40 as of mid-Feb 2017), and has consulted widely for international agencies such as the World Bank, OECD and ADB, various government agencies in Singapore, and many private corporations in Asia.  He was a Fulbright Visiting Scholar at U.C. Berkeley, a visiting scholar at Stanford University and Oxford University, and a Pacific Leadership Fellow at UC San Diego. An active angel investor with investment in over a dozen high-tech start-ups in Singapore, Silicon Valley, China and India, he was the founding chairman of Business Angel Network (Southeast Asia) and Asia Business Angels Forum, and is an advisor for a number of venture capital funds. He received the Public Administration Medal (Silver) Award from the Singapore Government in 2013 for his contribution to education in Singapore, and the “Entrepreneur for the World” Award (Education Category) from the World Entrepreneurship Forum in 2015. He is currently a member of the Competition Commission of Singapore (CCS). His publications can be downloaded here.

Yuen-Ping Ho is Associate Director at the Entrepreneurship Centre, National University of Singapore, where she manages the Research division. She has extensive experience in innovation and entrepreneurship research with publications in journals such as Small Business Economics, Scientometrics and Technovation. Her current areas of research are focused on measurement of S&T and innovation, growth dynamics of young firms, university technology commercialisation and public-private innovation collaborations.