The state, inequality and the politics of economic ideas: three blind spots in shadow banking

The state, inequality and the politics of economic ideas: three blind spots in shadow banking 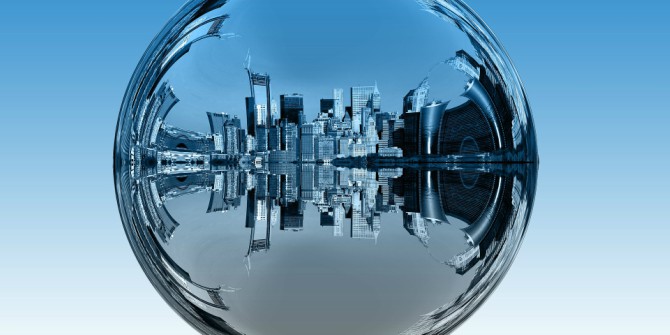 Shadow banking has become a systemic pillar of global finance. A typical map shows a complex network of shadow entities such as highly levered off-balance-sheet vehicles, broker-dealers, private equity firms, money market funds or hedge funds. Yet (large) regulated banks also moved in the shadows, driven by a combination of yield, regulatory and tax arbitrage in order to engage in securitisation (or transformation of loans into securities that could be traded) and repo markets (wholesale markets where financial institutions raise funding using securities as collateral).

Shadow banking has proved to be extremely dangerous. Between 2007 and 2011, it wreaked havoc with global finance and the fiscal sustainability of the nation-state. A solid consensus now connects the Lehman crisis and the European sovereign debt crisis to runs on shadow banking. Yet the growing literature on shadow banking – spanning from economics to law and political science  – shares three blind spots: the state, inequality and the politics of economic ideas. In a recent interdisciplinary forum we tried to speak to these critical but ignored facets of shadow banking.

The growth factors of shadow banking are to be found at both ends of the social inequality spectrum. At one end is a narrow population of cash-rich actors spawning giant pools of money and seeking safe returns. At the other end one finds a growing demand for credit by a cash-poor general population experiencing downward mobility and/or stagnant incomes. In this world, shadow banking institutions are allowed to behave as rentiers, as central bank policies extending financial safety nets to shadow banks amount to a form of regulatory rent. These safety nets are, then, not the apolitical, straightforward mechanisms economists cast them to be. Instead, they are problematic forms of institutional layering generated by specific political choices about how to manage state–market relations in general and credit allocation in particular. The most effective economic solution to redress this structural imbalance is not so much the better regulation of shadow banking (an increasingly elusive task given global arbitrage opportunities). It is macroeconomic policies that redistribute wealth on a massive scale.

Redistribution through the fiscal channel is complicated, however. The main reason, again, is shadow banking, which shrinks the state’s fiscal arm. The majority of shadow banking entities are registered in or register entities in tax havens, and, thus ensconced, they can alter the magnitude, timing and character of corporate and individual tax exposure to state power by changing what, where and even whether a tax is levied. Those arguing for austerity should first contend with the fact that the other choice is to progressively tax the great wealth legally recycled via shadow banking’s conduits into tax havens.

The state as factory of safe assets for shadow banking

The state appears in another guise in shadow banking, as a consequence of the efforts during the 1980s to create a strict separation between monetary and fiscal policies. While the state withdrew from economic life, privatising state-owned companies and banks, and putting macroeconomic governance in the hands of independent central banks, its role in financial life grew bigger. Government debt evolved into the cornerstone of modern, market-based financial systems, used as benchmark for pricing private assets, for hedging and as safe asset for credit creation via shadow banking.

The new role that the state plays in financial life, passive and systemic at once, has been reliant on the intricate workings of the repo market. Without their central banks’ monetising power, states engaged in a global competition for foreign investors by adopting the institutional blueprint of the US government bond market. This involved regular auctions, primary dealers and a liberalised repo market that would allow (foreign) investors to tap wholesale funding and to short government bonds. At first, several central banks – Bundesbank, the Bank of England – doubted the wisdom of this new model, worried that deregulated repo markets would unleash a structural shift to short-term, fragile finance that could undermine both monetary policy effectiveness and financial stability.

These concerns, unheeded by fiscal authorities, proved justified during the 1998 Russian crisis, the first crisis of shadow banking. Yet the transnational community of central bankers responded not by introducing repo rules, but by outlining the contours of a repo trinity: (1) financial stability in market-based finance required (2) global safe assets, issued in government bond markets that were in turn ‘lubricated’ by (3) deregulated repo markets. With the collapse of Lehman, it became clear that the repo trinity generated cyclical leverage, and that deregulated repo markets can equally create and destroy safe assets.

The impossible repo trinity (see Figure below) has powered a quiet revolution in crisis central banking. Central banks, most notably the Bank of England, have assumed direct responsibility for preserving the safety of government bonds through a buyer (or market marker) of last resort function. While in essence this means the state can rely on the monetising power of the central bank, it paradoxically does not reinstate fiscal dominance. Rather, both the state and central banks’ view of fiscal policy effectiveness remains wedded to the ‘monetary science, fiscal alchemy’ approach that dominated macroeconomics before the global financial crisis. Furthermore, central banks are engaged in a concerted attempt to find a safe asset substitute for government bonds. 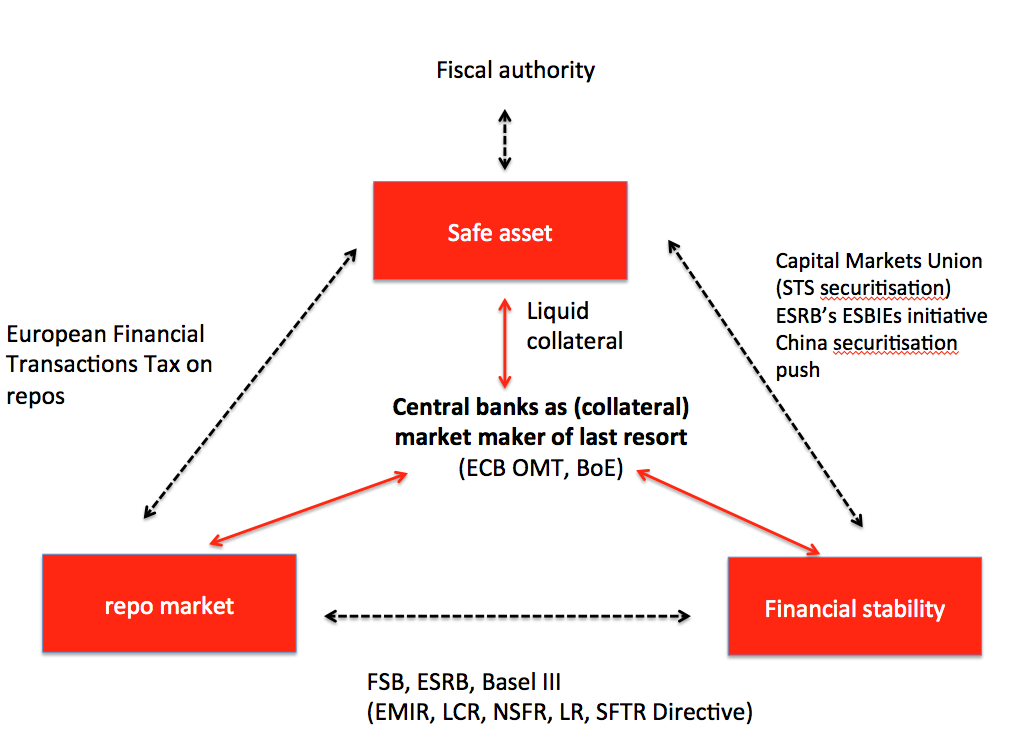 Finally, we wanted to find out whose expertise actually matters when designing policies targeted at shadow banking. To do this, some in our team looked at highly rated academic research behind the policy recommendations of the Bank for International Settlements (BIS), the International Monetary Fund (IMF) and the FSB. They show how experts situated within and around these actors are aware of the problematic mechanics of the shadow banking system and the systemic risk it engenders.

The evidence suggests that there are few instances of professionally respectable market fundamentalism and that the dominant tune is bland reformism. Drastic, paradigm shift-like regulatory reforms — of the kind that would follow from their alarm at the systemic risks posed by shadow banking — are relegated to the periphery of financial expert networks. Far from reflecting any hegemonic decline, American power remains unchallenged in this field as well, with research provided by the Fed and economists from elite US universities playing a key supportive role. Similarly, the authors found few traces of the influence of private sector experts in the influential BIS–FSB–IMF circles, thus suggesting that conventional arguments about private sector cognitive capture may be overstated, at least at this level of the regulatory regime.

Figure 2. Citation network for BIS, IMF and FSB, by institutional affiliation at the time of authorship 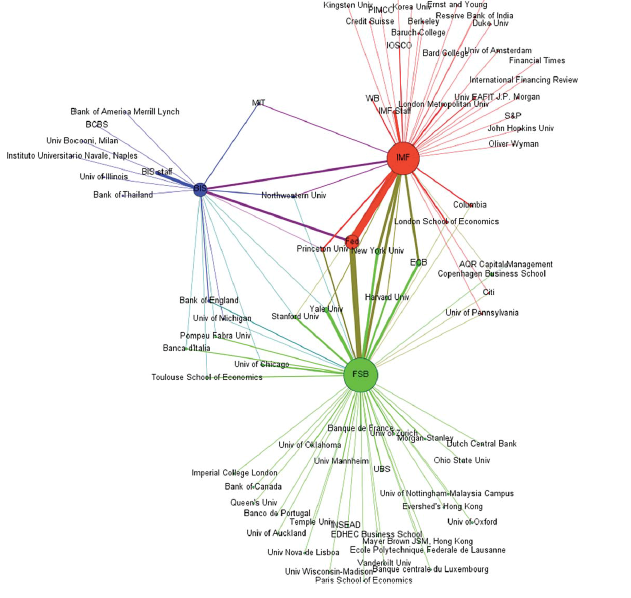 This quintessentially interdisciplinary effort stresses the contested and social nature of credit allocation and maps powerful economic, institutional and epistemic structures that have shaped the contours of shadow banking as an understudied pillar of modern finance. Key pillars of the shadow system stand to be drastically affected by the post-crisis reform initiatives. Yet little is known about why other shadow institutions have experienced less regulatory pressure, why we seem to return to a benign view of financial innovation in the international regulatory regime, (if) how states have been rethinking their role in financial life or, indeed, about how much the implementation of the existing regulations has been affected by uneven levels of expert and administrative-bureaucratic capacity among the elites staffing macroprudential oversight agencies. Another fruitful avenue for research involves a comparative analysis of varieties of shadow banking that starts from the observation that many emerging countries see shadow banking as a legitimate source of credit creation and – specifically in the Chinese case – as a pathway to the internationalisation of their currency, disregarding the systemic fragilities. The floor is open to future research addressing these gaps.

Will the future stabilise the regulatory status quo or usher in a bias to prudence, as some expected in the aftermath of the Lehman crisis?  If the findings of this collection of articles hold any water, the answer depends on the results of political struggles within the state, over inequality and between those making claims to authoritative knowledge.

Daniela Gabor is Professor of Economics and Macro-Finance at the University of the West of England, Bristol. She researches shadow banking activities, in particular repo markets, and the implications for monetary theory, central banking, sovereign bond markets and regulatory activity. Her two research projects are  Managing Shadow Money ​(funded by INET) and the Capital Markets Union (funded by FEPS). Her research also develops the theme of transnational banks’ involvement in policy deliberations around capital controls and crisis management in both global settings and in emerging markets. Another research area is the IMF’s conditionality and advice on capital controls.