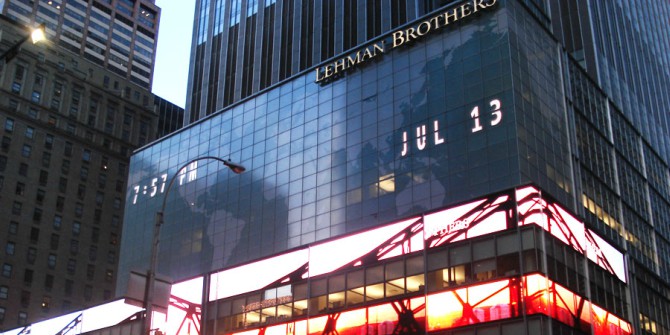 The US-President has signed an executive order which directs the US Treasury department to revise financial regulation, especially the Dodd-Frank Act. But starting a regulatory competition with the EU will endanger global financial stability.

The Dodd-Frank Wall Street Reform and Consumer Protection Act was initiated under the Obama administration as a response to the Global Financial Crisis. President Trump argues now that financial regulation is dragging economic growth by restricting banks’ ability to lend to businesses and households.

While both the US and the EU toughened bank regulation, funding shortages were significantly higher in the EU compared to the US. The larger funding shortages were to a certain degree based on the different crisis responses in both jurisdictions. While the US banks were obliged to increase their capital ratios, i.e. capital in relation to risk-weighted assets, recapitalisation was mandatory in most European countries. As a result, it was the European banks whose main channel to increase capital ratios was reducing risk-weighted assets, i.e. cutting lending to businesses and households.

The big question is whether the US intends to deviate from the common objectives now. The President’s executive order defines core principles for the regulation of the US financial system and the Secretary of the Treasury should report to what extent existing regulations promote or hinder the core principles. While it is hard to predict the exact recommendations, it can be discussed to what extent inconsistencies at the level of global financial regulation can be expected.

The first principle addresses consumer protection, which was strengthened after the global financial crisis, e.g. through the establishment of the Consumer Financial Protection Bureau, to guard against abusive or misleading retail financial products. Weakening consumer protection might have primarily domestic consequences. But it should not be neglected that the root cause of the crisis was a domestic real estate bubble based on loose lending standards.

The second principle is in line with the international consensus of preventing bailouts to failing banks. But this principle does not rule out that the rules designed to achieve a better resolvability for large banks will not be lightened. And it also does not rule out the abatement of the Volcker rule, which restricts banks’ proprietary trading and excessive risk-taking.

The third principle addresses systemic risks. Whether the President will regard risks as large or small depends a lot on the design of the underlying impact analysis. In principle, deregulation could mean a deviation of the US from global rules and standards on which regulators agreed in international forums like the Financial Stability Board (FSB) or the Basel Committee on Bank Supervision (BCBS).

The next principle, which says that American interests in international financial regulatory negotiations and meetings should be advanced, smells at lot like protectionism. It would probably mean that the US takes a different view in international forums. If the US wants to lessen standards, barriers for cross-border capital mobility will arise. The question here is also whether the US wants to protect domestic firms from foreign investors.

This point is strengthened with last principle of restoring public accountability within Federal financial regulatory agencies. It can be interpreted as limiting the Federal Reserve Bank’s role. Since Fed-chair Janet Yellen has the responsibility for monetary policy as well as for financial supervision and since her appointment has to be renewed next year, there might be a chance for Trump to replace her with someone who shares more his views on financial regulation.

The problem for the EU with revising Dodd-Frank, which likely coincides with the exit of the United Kingdom from the EU, will be that the two countries with the most important global financial centres, New York and London, could start a regulatory competition with the EU in order to attract businesses for their financial centres. The EU could then be tempted to lessen standards, too. Such a race to the bottom in financial regulation will weaken the global financial system and make financial crises more likely.

The EU’s response should not be to lessen its standards, but to promote the specialization of its own financial centres in continental Europe, especially in its competencies in financial technology.