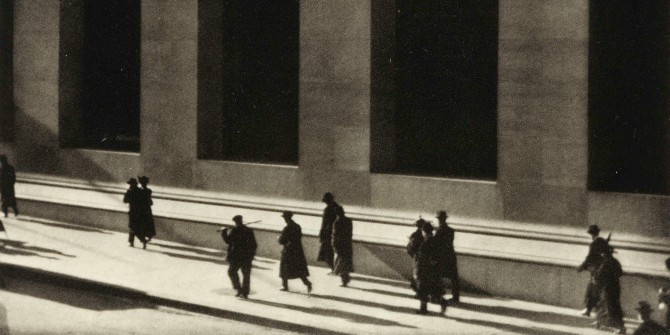 In the early twentieth century, most American public companies had a partner or director from a top-ranked investment bank on their boards. Market participants generally believed that the banker-directors of that era monitored company management on behalf of outside investors, and the privileged information the bankers obtained in their directorships enabled them to distribute their clients’ securities on more favourable terms. The underwriting business was quite concentrated, and the substantial market shares of major investment banks gave them a strong incentive against colluding with management to market securities of dubious value, since that would tarnish their reputations, and their future business.

Yet this concentration also raised a number of concerns. A small group of investment banking firms held directorships with nearly all major American public companies, giving them an extraordinary degree of influence over the economy. Often partners from the same bank held board seats with competing firms, which presented opportunities to facilitate collusion among their clients. And the cartel-like structure of the investment banking business itself raised concerns that a small number of firms held total control over access to finance, and may have been able to charge exorbitant fees for their services. The dual position of underwriter and director held by many investment bank partners created significant conflicts of interest.

Such concerns about the role of bankers in the economy led to an investigation in the U.S. Congress of the “money trust” in 1912. Ultimately, this led to the passage of the Clayton Antitrust Act of 1914, which included a number of regulations designed to restrain the power of financiers. Among them was its Section 10, which prohibited the securities underwriters of railroads — the largest and most important companies of their time — from holding seats on their boards. This statute presents an ideal opportunity to investigate whether railroads benefitted from having investment bankers on their boards, or whether the conflicts of interest inherent in the role of their banker-directors harmed railroads’ investors.

Section 10 was not implemented in 1914, but was repeatedly postponed by Congress and only went into effect in 1921. To comply with the law, underwriters could either resign from the boards of railroads, or retain their directorships and stop providing underwriting services. Some investment bankers stepped down from the boards of railroads prior to 1921 in anticipation of the law, but the major change occurred in the years immediately following the implementation of Section 10. On average, NYSE-listed railroads lost one investment banker from their boards during that period, as bankers resigned to comply with the law.

Using new accounting data we assembled for the years 1905-29, we find that railroads with stronger preexisting relationships with their underwriters experienced a decline in their investment rates, valuations, and leverage, as well as an increase in their average interest rates in the years following 1921. For the latter three outcomes, the effects were equivalent to 2 to 5 per cent of the variables’ 1920 means. The effect on investment rates was larger — a 28 per cent decline relative to the mean 1920 rate. This evidence is consistent with banker-directors helping to relax railroads’ financial constraints. The increase in interest costs and decline in valuations directly contradict the views of the supporters of the Clayton Act, who argued that banker control harmed railroads by raising their interest costs and encouraging them to make inefficient investments.

In order to verify that these changes were indeed caused by Section 10 of the Clayton Act, rather than other events affecting railroads or their relationships with investment banks, we performed the same analysis on industrial firms and utilities, which were not subject to the regulations of Section 10. We find no effects of close ties to underwriters on those firms’ performance in the years following 1921.

We also investigate the mechanisms behind these effects. We find that railroads with close relationships with underwriters suffered to a greater extent when they had a substantial amount of debt maturing in the years immediately following 1920, or when they had relationships with the highest-ranked investment banks. These findings suggest that problems in accessing capital markets created by the legal disruptions to bank-firm relationships are the likely mechanism behind our results.

The prohibitions of Section 10 encompassed other forms of self-dealing by railroad directors, such as the purchasing of inputs from affiliated firms. We find that the valuations of railroads that had maintained board interlocks with capital equipment suppliers rose somewhat in the years following the implementation of Section 10, indicating that self-dealing in supply contracts may have harmed the railroads. The authors of Section 10 also hoped to reduce the ability of banker-directors to facilitate collusion, since many bankers held multiple railroad directorships. Yet interlocks with competitors created by underwriters had no differential effects following the implementation of Section 10.

The implications of our findings from the 1910s and 1920s for modern firms may depend on the context. It is far less common for major American corporations to have bankers on their boards today, and some evidence suggests that banker-directors exacerbate, rather than ameliorate, agency problems for them (Guner, Malmendier and Tate, 2008). Thus, relationships with intermediaries apparently do not serve the same role today as they did in the early twentieth century.

The dramatic evolution of American financial markets and regulatory frameworks since the 1920s may explain this difference. Investors today have stronger legal protections and greater access to information than they had prior to the advent of the Securities and Exchange Commission. In the early twentieth century, investors trusted reputable investment banks to defend their interests to a much greater extent than corporate managers. This suggests that our results may be most relevant to countries with limited protections of investors. In such environments, affiliations with financial intermediaries that can effectively act as monitors may ease firms’ financial constraints, and contribute to economic growth more generally.

The results of our paper also provide new insights into the effects of rules intended to address conflicts of interest. Railroads were made better off by the prohibitions against self-dealing in equipment supply contracts, suggesting that the benefits from relationships with suppliers (such as a timely delivery of high quality inputs) were not large. But Section 10 of the Clayton Act was motivated by a theory that bankers used their influence over railroads’ access to finance to enrich themselves at the expense of other investors. In its attempt to address the conflicts of interest inherent in the bankers’ positions as corporate directors, Section 10 disrupted relationships between underwriters and railroads that had developed in order to facilitate valuable flows of information, and to constrain powerful insiders.

Restricting these relationships ultimately harmed most of the firms and investors that the regulation was intended to protect. Our empirical analysis does not measure the potential effects of this regulation on other economic agents, and we therefore cannot estimate the general welfare effects created by Section 10. However, our findings do suggest that legal prohibitions or rules aimed at safeguarding against conflicts of interest that arise in the economy more generally can have substantial economic costs, particularly if they disrupt the flow of information often inherent in these transactions.

Carola Frydman is an Associate Professor of Finance at the Kellogg School of Management. Her research focuses on American business history. Recent research projects examine the evolution of financial markets prior to the Great Depression, with special emphasis on the role of financial intermediaries for firm growth, and on financial crises. She has also studied the long-run trends in executive compensation, the market for managers, and corporate governance. Her work has been published at major academic journals, and featured in The Wall Street Journal, the New York Times, and The Economist. Prior to joining Kellogg, Professor Frydman was an Assistant Professor of Finance at the MIT Sloan School of Management (2006-2011) and an Assistant Professor of Economics at Boston University (2011-2016). She holds a Ph.D. in Economics from Harvard University, and B.A. and M.A. degrees in Economics from Universidad de San Andres, Argentina. She is a Faculty Research Fellow at the National Bureau of Economic Research.

Eric Hilt is Associate Professor, Economics at Wellesley College, and a Research Associate of the National Bureau of Economic Research (NBER). His research focuses on the history of American business organizations and their governance, and more generally on the role of legal institutions in shaping economic and financial development. His most recent work has analyzed the impact of historical financial crises on the development of financial regulations; the role of bankers on the boards of 19th-century American corporations; and the shareholder protections intended to attract investors in early corporations. Earlier work analyzed the organizational forms and contracts utilized in the American whaling industry. He is on the editorial board of the Journal of Economic History. Personal web page here.