Great Divergence: The steamship gives us clues on the impacts of globalisation

Great Divergence: The steamship gives us clues on the impacts of globalisation 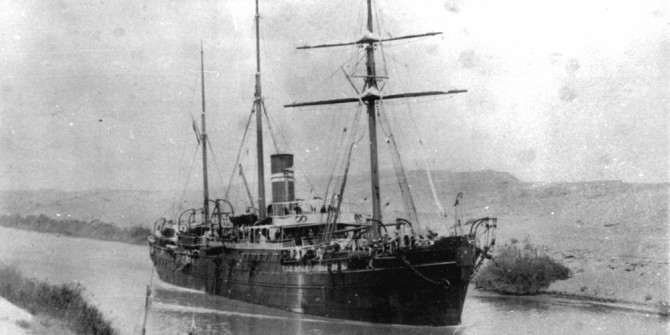 How does globalisation affect development? This question has a long tradition in economics and has been much debated both in academia and in policy circles.

Neoclassical theories tell us that reducing trade barriers across countries should provide net benefits to individual economies by making markets more efficient and stimulating competition. Testing these theories, however, turns out to be difficult: rich countries are generally also those that trade the most, but is it trade that makes them rich, or do they trade more because they are rich to start with?

The ideal way to answer to these questions would be through an experiment, in which we randomly divide all the countries of the world into two groups and then we reduce trade costs for one group, while keeping trade costs constant for the other group. The difference in the observed GDP growth in the following years between the two set of countries would eventually provide us with an estimate of the impact of trade integration on development.

It turns out that history can provide us with such an experiment! The invention of the steamship in the late 19th century greatly reduced trade costs for some countries but not for others; whether a country was able to reduce its trade costs as a result of this innovation was the result of its geography, rather than economic forces. In a recent paper (Pascali, forthcoming), I use this natural experiment to assess the causal impact of trade on development.

Before the steamship, sea routes were shaped by winds. As an example, consider Figure 1, which illustrates a series of journeys made by British sailing ships in the 19th century, between England, the Cape of Good Hope and Java, and Figure 2, which depicts the prevailing sea-surface winds in the world. Winds tend to follow a clockwise pattern in the North Atlantic; consequently, sailing ships would sail westward from Western Europe, after traveling south to 30 N latitude and reaching the ‘trade winds’, thus arriving in the Caribbean, rather than traveling straight to North America. The result is that trade systems historically tended to follow a triangular pattern between Europe, Africa, the West Indies and the United States. Furthermore, because in the South Atlantic winds tend to blow counterclockwise, sailing ships would not sail directly southward to the Cape of Good Hope; rather, they would first sail southwest toward Brazil and then move east to the Cape of Good Hope at 30 S latitude. 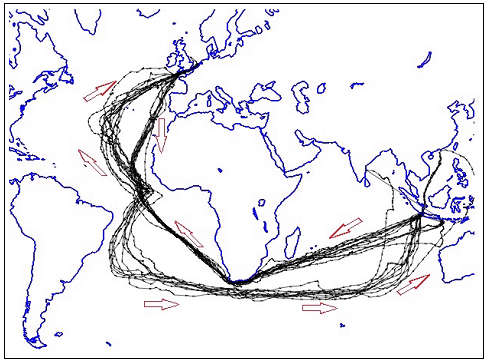 Notes: These journeys were randomly selected from the CLIWOC dataset among all voyages between England and Java comprised in the dataset.

The invention and subsequent development of the steamship was a watershed event in maritime transport and was the major driver of the first wave of trade globalization (1870-1913), an increase in international trade that was unprecedented in human history. For the first time, vessels were not at the mercy of the winds, and trade routes became independent of wind patterns.

The steam engine, however, reduced shipping times in a disproportionate manner across trade routes, depending on the type of winds that vessels used to face throughout their journeys. In some routes, shipping times were cut by more than half, while in some others the change was minimal.

These asymmetric changes in shipping times (and related trade costs) across countries are used as a natural experiment, to explore the effect of international trade on economic development.

Exploiting the random variation in trade costs, generated by the transition from sail to steam, I document that the consequences of the first wave of trade globalization on development were not necessarily positive. On a sample of 36 countries, the average impact, in the short run, was a reduction in per-capita GDP, population density and urbanisation rates.

This average negative impact, however, masks large differences across different groups of countries.

Firstly, the initial wave of trade globalization turned out to be particularly detrimental in countries that were already less economically developed to start with and it was probably the major reason behind the Great Divergence, the economic divergence observed between the richest countries and the rest of the world, in the second-half of the nineteenth century.

Secondly, trade turned out to be very beneficial for countries that were characterised by strong constraints on executive power, a distinct feature of the institutional environment that has been demonstrated to favour private investment.

Why should we expect institutions to be crucial for a country to benefit from trade? A common argument is that a country with ‘good’ institutions will suffer less from the hold-up under-investment problem in those industries that intensively rely on relationship-specific assets. In this sense, good institutions are a crucial source of comparative advantage in non-agricultural sectors, in which the hold-up problem is more binding. My results confirm this theoretical prediction: a reduction in trade costs increased the share of exports in non-agricultural products, and the share of the population living in large cities, only in those countries characterised by stronger constraints on the executive power.

How did the rise in international trade affect economic development? I addressed this question using novel trade data and an historical experiment of history. I found that 1) the adoption of the steamship had a major impact on patterns of international trade worldwide, 2) only a small number of countries, characterised by more inclusive institutions, benefited from trade integration, and 3) globalisation was the major driver of the Great Divergence.

Policymakers who are willing to learn from history are advised to consider that a reduction in trade barriers across countries does not automatically produce (at least in the short-run) large positive effects on economic development and can increase inequality across nations.

Luigi Pascali is an Associate Professor of Economics at Pompeu Fabra University. He is also affiliated with the Barcelona Graduate School of Economics, CEPR and CAGE. He holds a Ph.D. in Economics from Boston College. His research covers topics in growth and development, economic history and macroeconomics and has appeared in international journals, including the American Economic Review and the Review of Economics and Statistics. He is an associate editor at the Economic Journal.