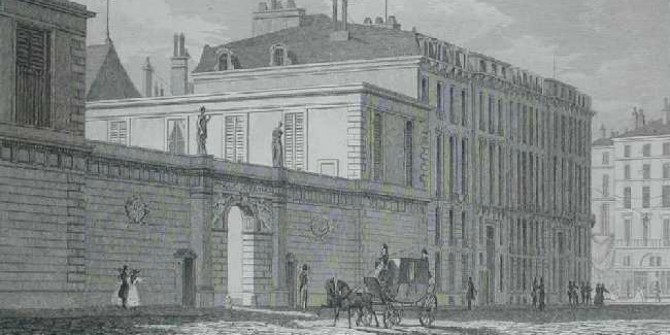 The last financial crises highlight the importance of operational procedures used by central banks to cool down financial distress. To fulfill their mandate of financial stability, central banks have always featured temporary extraordinary loans to previously ineligible financial intermediaries or to the purchases of new types of assets.

Critics of those policies insist central banks lack knowledge on their counterparties and those extraordinary measures may have ensued fiscal risk. Banking theorists have been concerned that a wide access to the lender of last resort may fuel moral hazard and risk-taking behaviour. Yet the absence of a system of information on counterparty credit risk might also impede the transmission of monetary policy if it led to the denial of lender of last resort assistance.

We show that already in the 19th century the Banque de France was able to accommodate a very large and diverse set of counterparties at no fiscal risk. This implied designing an organization able to (i) screen and monitor very carefully its counterparties and (ii) adopt very strict internal governance to mitigate moral hazard risk. We use archives from the head office and local branches of the Banque de France to detail the procedures of supervision of the quality and wealth of counterparties and describe its organization and the procedures.

This governance addressed the concerns of banking theorists according to whom moral hazard might have two causes: imperfect information on counterparties and cronyism in the choice of institutions. The solution to imperfect information is to acquire information on credit risk, to collateralise and to condition refinancing on risk-taking behaviour. At the same time, cronyism is subdued by an internal governance limiting principal-agent problem within the organisation.

The Bank of France accepted a great diversity of counterparties in terms of occupation, with huge differences between the types of collateral pledged between banks and non-banks. Examples include Musso, a wine merchant and discounter in Bastia, and Thibaud, an oil merchant and discounter in Marseille. Local industries were also well represented by colonial traders in Bordeaux or textile industrial magnates in Roubaix. All in all the Banque de France had in 1898 more than 1,600 counterparties located in one of its 94 local branches. More than half of them were banks.

The screening of presenters and endorsers of bills of exchange was conducted within each branch of the Banque by the local manager together with a committee of local shareholders of the Bank. Their decisions were reported every week to the portfolio committee composed of shareholders working at the headquarters in Paris. The Bank was also careful in excluding its managers and local shareholders from access to the discount window. Managers could not present any bills while local shareholders were subjected to very strict constraints of collateralisation. These precautions aimed at avoiding cronyism.

Local branch activity and the quality of their information collection was further monitored every year by a team of supervisors who issue binding recommendation when their cross checking of these pieces information led them to judge it too poor.

Figure 1 provides an example of one of the information checks made in 1898 on a banker from Toulouse named Courtois. The supervisor reported the total discounted from Courtois, the collateral he pledged (guarantees associated with endorsement or securities), and the advances he drew on his current account. The supervisor also added a brief description of the bank, assessing solvency and business model quality, and reviewing the endorsers of the bills. He judged the local reputation to discriminate against the discounters. Courtois is then reported as “performing, accurately and faithfully, mostly with his own equity, a fierce search for new clients to the point of damaging the quality of his clientele”, see line 10-3 of figure 1. As shown in the paper, such a description of a risk-taking behavior usually leads to a reduced volume of rediscounting by the Banque de France.

In another report, the supervisor gave a positive rating to Mazurié, a banker in Saint Brieux who was described as careful, choosing cautiously his clients and inspiring confidence in the country.[1] We use regression analysis to show that those assessments affected significantly the volume discounted from those counterparties, limiting it to those taking risks compared to the cautious businessmen. This may go a long way to discipline risk-taking behavior in a world guaranteeing wide access to the discount window.

Figure 1: Report on discount, collateral and reputation of the bank Courtois in Toulouse in 1898 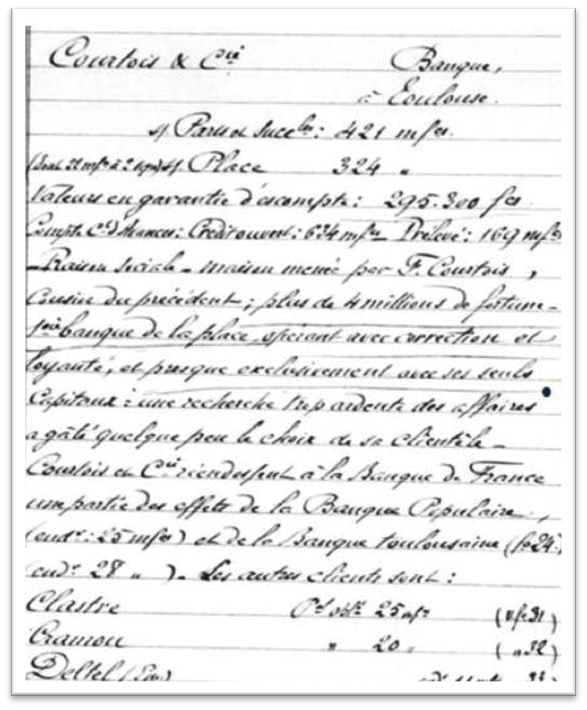 We show moreover that the Bank was not exposed to credit risk but to liquidity risk as the bills were guaranteed either by the presenters’ own capital or by pledged securities. Indeed, to secure their lending with the central bank, banks relied on techniques akin to micro-finance such as personal guarantees while non-banks pledged mostly liquid securities. These patterns can be understood as banks being agents providing relationship lending services in an economy in which defaults were very harshly punished.

This wide variety of discounters does not run counter to the fact that the Banque de France was the bank of banks, contrary to what was argued in some previous work. In 1898, banks represented half of the discounters but 84 per cent of the total discounted volume (see figure 2). Moreover 30 per cent of all banks operating in France discounted with the Bank of France.

Together with the fact that the Bank of France was part of the government, this establishes its role as the central bank in the late 19th century. That leads us to wonder about the rationale for maintaining the discount to non-financial traders. We notice that in an economy in which the financing of the economy required various types of financial intermediaries, there was no clear delineation between banks and non-banks as shadow banks operated in the middle, often as an activity that grew out of traditional merchant activity.

Our study on the case of the Banque de France suggests that supervision procedures are key to protect central banks from credit risk in their activity of liquidity injections and that this involved collecting precise information on both counterparties and collateral.

Authors’ note: The views expressed here are our own and should not be interpreted as reflecting those of the Banque de France or the Eurosystem.

Vincent Bignon is attached with the Bank of France, where his research deals with economic history and monetary theory and his policy work analyses the collateral framework of central banks and the regulation of central clearing counterparties. Before joining the French central bank, he had been an associate professor at the University of Paris East, at Sciences Po in Paris and at the Graduate Institute for International and Development Studies in Geneva. He also held visiting positions at the University of Pennsylvania in Philadelphia and at George Mason University in Virginia.

Maylis Avaro is a PhD student at the Graduate Institute of International and Development Studies in Geneva, currently working on the Swiss franc during the Bretton Woods era. Her research interests also include history of central banking, financial crises and regulation. She holds an MSc in Economic History (Research) from the London School of Economics, and an MA in Economics and Social Sciences from the Ecole Normale Supérieure.