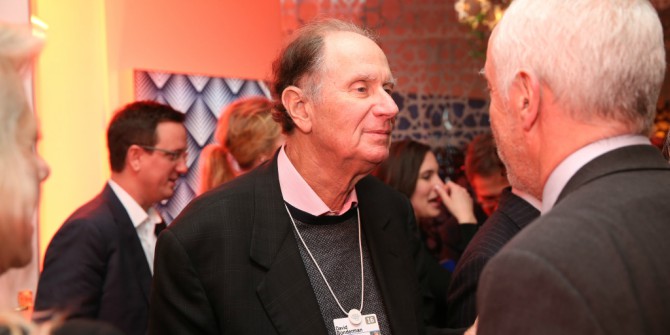 The widely reported resignation of Uber board member, David Bonderman, following his words at an all-hands staff meeting in June 2017 offers an exemplary case of controversy in corporate ethics and culture.

Bonderman’s remark and the reaction to it can thereby be used to raise questions about how interactions in business settings are treated as ‘inappropriate’ and calling for requiring apologies and resignations. His comment appears early in the meeting, about six minutes in, midway through Arianna Huffington’s talk, when he says the following:

These fourteen words do not provide a contextual relevance about how they came to be seen as a ‘sexist joke’ or a ‘sexist remark’. What is it about these words that gives them this meaning? What contextual relevancies and common sense resources make it possible for his comment to be heard as a sexist joke, and thereby treated an ethical issue for Bonderman and Uber’s management?

His words were quickly characterised as a ‘sexist joke’ in press reports and on social media. One initial feature of how this controversy emerged is worth noting, namely that these remarks were made public through a ‘leaked audio’ file posted online. A transcript of the ‘leaked audio’ was also prepared and posted on social media the same day.

There was also a large public response to a tweet from the journalist who first reported the story and transcript, Julia La Roche, from Yahoo Finance. This received hundreds of comments, 2214 retweets and 2542 likes. So in this sense, the fact that his remarks were made public as leaked audio, transcripts and social media raises an initial question: Would Bonderman’s resignation need to have been tendered if these comments had remained behind closed doors without being recorded and ‘leaked’?

News media stories also treated the remarks as thematically relevant to a series of recent complaints levelled by former employees about sexism, harassment and discrimination at Uber. In February 2017, former Uber engineer Susan Fowler Rigetti published a blog post that itemised a set of complaints. These included being propositioned by her manager on her first day at Uber and that 3 per cent of the site’s reliability engineers were women.

Other stories have emerged since then, namely that a former employee was fired for raising concerns to Uber’s HR department about sexual harassment. This former employee filed a complaint of discrimination with California’s Department of Fair Employment and Housing. This document reports that HR staff had told the complainant that “we get a lot of phone calls from employees that we don’t always act on.”

At the all-hands meeting where Bonderman’s remarks were made, Uber management presented recommendations about culture change programs to improve employee relations and transparency, and to address Susan Fowler Rigetti’s allegations. At this meeting, the board members discussed specific aspects of former Attorney General Eric Holder’s investigatory report into these allegations and described four categories of recommendations about changes to make to Uber’s culture. Given this context of controversy at Uber, David Bonderman’s remarks could easily be heard as yet another example of a sexist conduct in a ‘toxic workplace’.

This is the overarching context in which complaints about sexism and discrimination had been publicly raised about Uber. It is also important to understand the specific interactional context in which Bonderman spoke. This interactional context provides both staff attending the meeting and those listening to the leaked audio-file with a sense of how his remarks can be heard to be a ‘sexist joke’.

His comments were made whilst Arianna Huffington’s was introducing a new member of the board, Wan Ling Martello. The sequence of talk followed a description of Wan Ling Martello’s career profile and the implication of her appointment for women’s participation on Uber’s board of directors.

Arianna:     And as a result the participation of women on the board went from 14 per cent to 25 per cent

David:         Actually what it shows is that it’s much more likely to be more talking

Arianna:     Ah hhha ha ha ohhh come on David you huh uh da- don’t worry David will have a lot of talking to do as well

The first observation to make about Bonderman’s remark is that it seems to be a rare occasion in the meeting in which a board member speaks during another member’s presentation. In this sense, the remark is also observably an interruption of the preferred turn-taking system established in the meeting, in which each board member has an allocated time to talk, uninterrupted from comments from the others.

A second observation is that Bonderman’s words can also be heard to disagree with the prior turn. He begins the turn with ‘actually’, which suggests that he is ‘correcting’, or offering an ‘other-initiated repair’ of Arianna Huffington’s presentation about ‘what the data shows’. Bonderman then recycles a component of the prior turn when using the ‘much more likely’ form to repair Arianna’s account.

Thirdly, his comments also seem to trade upon on a crude typification that ‘women talk more than men’. By doing so, his comment seems related to an already-relevant ‘sexist corporate culture’ frame of reference. This is clearly the most relevant frame with which to interpret his remark.

Given these points, and the recognition of the contextual relevancies and language practices, Bonderman’s fourteen words works are intelligible as a ‘sexist joke’ in a ‘toxic workplace’.

I hope the key takeaway from this post is not to avoid telling jokes at board meetings. If anything, it is to indicate how ‘inappropriate comments’ can take on an unforeseen significance given organisational change programs, controversies, intensive social media attention and preferred interactional practices at board meetings.

These sense-making practices shape how ethically accountable conduct is organised in business settings, and it is only by recognising these relevancies that business leaders can understand their remarks as ethical objects.

Julian Molina is a PhD student at the University of Warwick’s Department of Sociology. His doctoral research project addresses how welfare professionals implement educational and employment interventions within workplace settings. He is starting new research which more explicitly address ethics and state regulation of professional groups.