They have potentially positive and negative effects; it's important to debunk some of the hype and rhetoric, writes Cristiano Codagnone 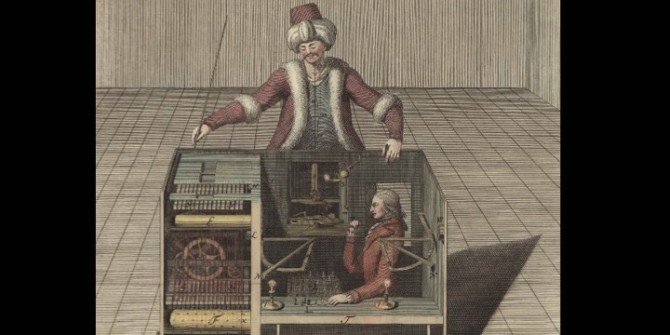 In 1770 Wolfgang von Kempelen presented a sort of robot called the Turk (hidden inside there was, in reality, a person operating it) that could beat humans at playing chess. The robot toured Europe, eliciting contrasting reactions about the future robotisation. The first digital labour market for the trading of micro-tasks was tellingly named Amazon Mechanical Turk and presented as a new form of ‘artificial intelligence’ based on the principle of ‘humans-as-a-service’.

In the past three decades or so each new wave of digital innovation has aroused debates and contrasting narrative and rhetoric about the future of work. The emergence of digital labour markets, in which labour-intensive tasks are traded through platforms that match requesters (employers and/or consumers) with providers (workers), is no exception.

Proponents see digital labour markets as a further driver toward the advent of a ‘Flat World’ and an online global meritocracy; as a means to empower individuals allowing them to work flexibly or make extra money (especially ‘flexers’ such as stay-at-home parents, retirees, students) and for firms to efficiently deal with work picks.

Detractors see digital markets as a new and unregulated channel for exploitation by employers and labour cost-saving; they argue that the ‘gigs’ traded on these markets are the components of formerly full-time jobs, parcelled up and put out to tender on a piece-by-piece basis to increase outsourcing across the board. In a critical review essay, based on several hundreds of secondary sources and on the review of dozens of digital labour markets, we have attempted to disentangle the rhetoric with available empirical evidence.

Digital labour markets take different forms depending on whether they allow the remote delivery of electronically transmittable services (i.e. Amazon Mechanical Turk, Upwork, Freelancers, etc.) or rather the matching and administration processes are digital but the delivery of the services is physical and requires direct interaction. The former we call ‘online labour markets’ and are potentially global, whereas the latter we call ‘mobile labour markets’ and are by definition localised. Adding the level of skills entailed in the work we have the typology depicted below. 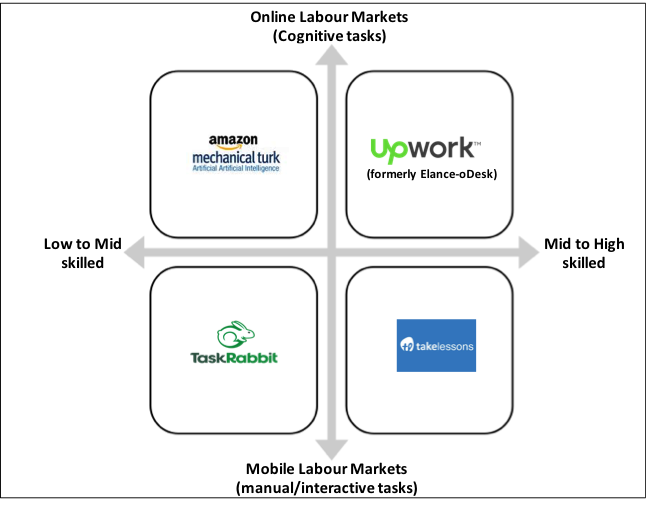 Digital labour markets can have a number of potentially positive and negative effects. They can increase the pool of employers and workers by removing barriers and reducing transaction costs, improving matching, increasing human capital specialisation, with potential net welfare effects such as more efficient labour markets and increased employment.

On the other hand, bias, frictions and mismatches could counter any of the above-mentioned positive effects. Furthermore, as they create precarious forms of employment, they could also be the source of social risks and costs. In spite of emerging indications, the evidence is limited and inconclusive with respect to these effects. Nonetheless a number of facts can be drawn that also debunk some of the hype and rhetoric.

Workers in digital labour markets do not work for ‘pin money’ or out of boredom, as there are fairly large shares of individuals for whom earnings from working in such markets represent their primary source of income and/or who engage in a portfolio of several activities. The idea of flexers earning extra-money for fun or for increased autonomy is just a myth.

Contrary to the hyped rhetoric of a flat worldwide online meritocracy and despite the sophisticated algorithms used, these digital labour markets still present some clear frictions, hiring inefficiency, and biases of an ethnic and/or gender nature. Controlling for all other conditions (age, educational level, experience), contractors from certain countries tend to be hired more frequently for certain types of jobs.

Also all other things being equal, women are less likely to receive stereotypically ‘male jobs’ (i.e. engineering tasks). This means that, despite advancement in technology, information overload leads employers to still rely on heuristics and biases when hiring in digital labour markets.

On employment and related labour income effects, the available evidence is limited and inconclusive. In the reviewed studies focussing on online labour markets, examples of concentration of work assignments leading to job concentration and more income inequality were found, such as ‘superstar’ effects, that is, top-rated workers getting hired more often than others.

No cases were documented, however, of the long tail effect (jobs being spread out among more people,) which has more equalising effects on both employment and income levels. The same applies to MLMs, multi-level marketing companies such as Amway and Avon, whose workforce get paid on a commission basis. In one case, less than 10 per cent of workers account for more than 80 per cent of work completed.

Workers in digital labour markets do not benefit from any form of social protection, insurance or other benefits. Several class actions in the US on the status (contractors vs. employees) and on minimum wages have made the debate on possible regulatory intervention more heated, which is now starting to become relevant also in Europe. It has been proposed that an intermediate status between a contractor and an employee (dependent self-employed) be created and that digital labour markets should be made to pay at least a part of the traditional bundle of social protection provisions.

This solution, however, would be difficult to implement as it is not easy to define in a general way the criteria that identify a dependent self-employed person. An alternative proposal, named ‘benefits portability’, consists of creating individual security accounts to protect workers as they move from ‘gig’ to ‘gig’.

Benefits (wage insurance, health insurance, disability and injury insurance) should be designed universally and not tied to specific employers. The final employers would have obligations similar to those that employ regular workers or they could share contributions with the digital labour markets, which could pay half of them.

The emergence of digital labour markets poses a number of questions for policy makers:

As this policy debate heats up, further empirical evidence is needed to at least partially support policy makers in answering some of the questions above.

Cristiano Codagnone is an aggregate professor at at Milan State University (Department of Social and Political Sciences) and at the Universitat Oberta de Catalunya (UOC, Department of Communication Studies.) In Barcelona, he is the Director of the UOC spin-off research company Open Evidence SL and of the Research Group Applied Social Science and Behavioural Economics (ASSBE). He graduated in economics from Bocconi University, holds a Ph.D. in sociology from New York University, and was post-doctoral fellow at Utrecht University. In 2014 he was Visiting Senior Research Fellow at LSE’s Media and Communication Department. He has served at the United Nations (2003-2004) and at the European Union (2009-2011 and 2015-2016). Since 2012 he has designed and directed several experimental behavioural studies to test policy options on behalf of the European Commission in various domains (tobacco packaging, online gambling, car labelling, online marketing to children, transparency of online platforms). Starting in September 2017, still on behalf of the Commission, he will direct a behavioural study on non standard forms of work with respect to attitudes and awareness towards social protection and employment benefits.