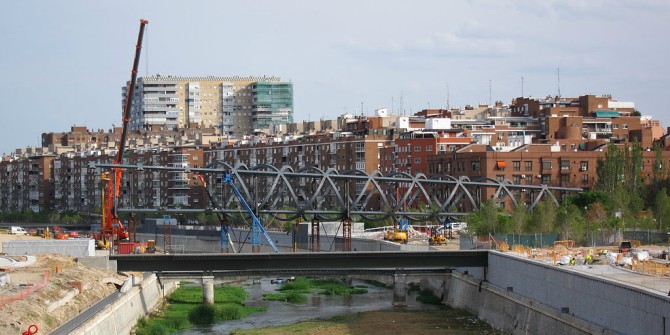 Our study uses administrative data to document large cyclical variations in the evolution of earnings inequality in Spain. We find that the construction sector played a key role in this evolution.

Figure 1 shows the evolution of the logarithm of the 90/10 percentile ratio of male daily earnings – a commonly used measure of inequality – between 1990 and 2010. The figure shows that inequality closely tracks the evolution of the unemployment rate during the period. Earnings inequality increased around the 1993 recession; it experienced a substantial decrease during the 1997-2007 expansion; and then there has been a sharp increase during the recent recession. In particular, during the 1997-2007 expansion, inequality decreased by 10 log points, while between 2007 and 2010, it increased by the same amount.

These fluctuations are large by international standards. By comparison, in the United States, male inequality increased by 16 log points over a longer period, between 1989 and 2005, while the increase in German earnings inequality was slightly lower. 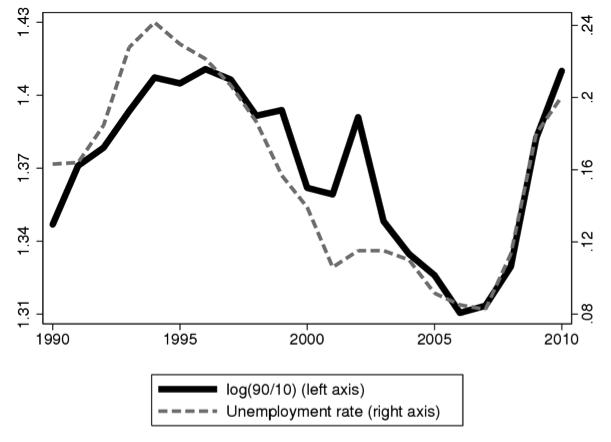 Figure 2: Employment growth as a function of daily earnings (males) 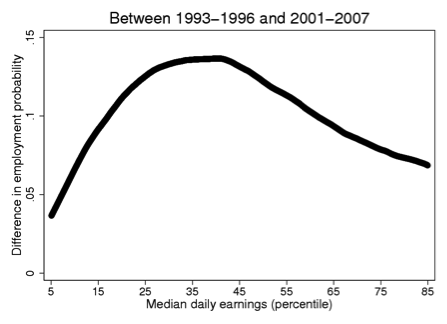 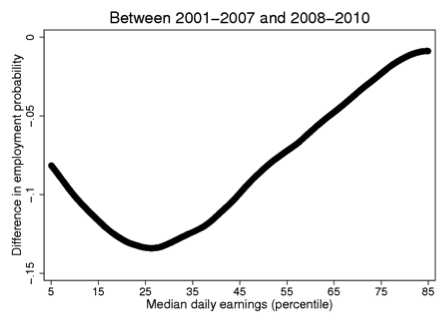 To understand the reasons for this evolution we turn to a sectoral analysis. We find that the construction sector stands out. Between 1997 and 2007, the share of construction in male employment increased from 14% to 21%. It then sharply decreased to 13% in 2010, below its 1990 level. In turn, earnings of construction workers increased during the expansion episode relative to other sectors.

Overall, our evidence shows that while there has been no trend in the recent evolution of earnings inequality in Spain, countercyclical fluctuations have been substantial.

In addition our findings highlight a key role of the construction sector. The evolution of employment and earnings of construction workers is consistent with the implications of demand shocks induced by the housing market. Since those shocks were partly the consequence of policies aimed at fostering the demand for housing, our analysis suggests that such policies may have sizeable effects on aggregate labour market outcomes.

Stéphane Bonhomme is Professor at the University of Chicago-Department of Economics. He did his PhD at CREST and Université Paris I. His research interests include Labour economics, Microeconometrics, and econometric theory, with a special interest in latent variable modelling and panel data. Email: sbonhomme@uchicago.edu

Laura Hospido is an economist at the Microeconomic Analysis Division of the Banco de España. She received her Ph.D. in Economics at CEMFI and University of Santiago de Compostela. She is also affiliated with IZA as a Reseach Fellow. Her research interests include Earnings Dynamics, Labour Supply and Mobility, Gender Economics, Financial Literacy and Survey Methodology. Email: laura.hospido@bde.es