The fast growth of co-working spaces in London

The fast growth of co-working spaces in London 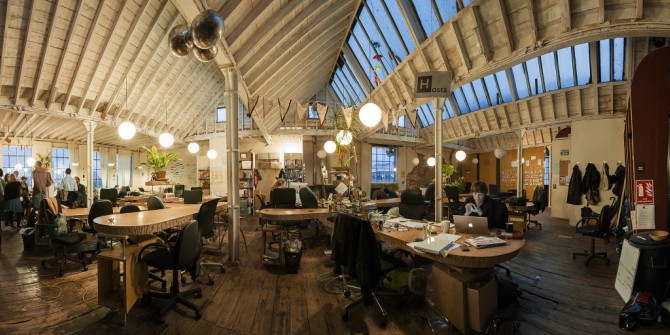 The growth of shared, flexible urban workspaces for startups and SMEs (small and medium enterprises) is now a striking, and very visible feature of British cities. Over the past decade or so, startups and small firms in retail, manufacturing, arts, the cultural industries and the digital economy have been making creative use and re-use of urban spaces – through newish practices such as co-working and pop-ups, as well as reconfiguring older forms such as high street units and industrial estates. We can see these new practices across the city – in centres and in peripheries, in economically vibrant neighbourhoods and more deprived places. Since 2007, for example, there’s been a particular explosion of co-working, incubator and accelerator provision in London: in 2014 there were at least 132 spaces, 50 per cent of which had arrived since 2012. Today there are at least 156 co-working spaces alone.

This colourful landscape raises a lot of questions for researchers and policymakers.

A first set of issues is about origins. Are these new flexible urban spaces a kind of emergency city-making – a response to post-crisis precarity, casualisation and rising rents? Are they driven by changes in technology, work styles and organisational form? Or by more enduring exclusions on the basis of race, class and gender? To look at it another way, is this a story of innovation, inequality – or both?

Second, and more prosaically, we need better ways to describe these practices, explore the connections between them and their potential impacts. Different academic fields – economics, geography, sociology, planning, entrepreneurship, migration studies, for example – need better joining together. And there’s a lot of fuzzy policy language here. Can we develop a common framework? Equally, what are the economic and social contributions to those taking part, to the larger urban economy and to city life? Who benefits, and who misses out?

Third, how should urban policymakers react? Some of this is a positive question: what interventions would help these practices become more effective, and more accessible? Some of this is normative. Right now, the shinier, trendier parts of the field (tech incubators and accelerators, pop-ups) seem a lot more favoured than other parts (high streets, industrial estates). Should we care about this, and if so, how can we develop a more equitable stance?

This is a big agenda. To make a start on it, Suzi Hall and I organised a workshop that brought together academics, policymakers, architects, consultants and workspace operators. Here are some reflections on the day. We focused on London, but we believe there are many lessons here for other places.

There’s a web of reasons behind the emergence of the current crop of flexible urban spaces and space uses.

Deeper forces driving up demand would include: shifts in work styles, enabled by technology (especially pervasive broadband, mobile, and the cloud); smaller, more networked firms in many sectors; and rising self-employment in UK. We are seeing an ever-more complex interplay of online and offline activity, with profound changes for the way we use workspaces in cities. The ‘death of the death of the death of distance’, maybe.

We’re seeing a fashion for entrepreneurship and entrepreneurial lifestyles: in turn, that’s driving up demand for workspaces that resemble ‘where entrepreneurs work’. At the same time, it’s clear that growing self-employment is not primarily a matter of choice. Much is a reaction to the recent shutting-off of economic opportunity post-2007; and as well as more structural factors such as job casualisation, and for many communities, persistent discrimination in the labour market. In turn, that is driving ‘innovative’ responses to exclusion, including imaginative reconfigurations of urban spaces and streets, especially in more deprived neighbourhoods.

On the supply side, we can also pick out several forces. Policymakers in the UK and elsewhere have sought to provide subsidised workspace for small firms since the 1960s, and a big crop of such workspaces appeared in the 1980s and 1990s in British cities. In post-industrial cities like London, such provision now needs to be see against increasingly large, competing demands for space. Luxury residential development often wins the battle, aided by recent policy changes that make it easier to convert office and commercial space. That conflict may be pushing more ‘flexible’ business models: co-working, hot-desking and combining workspace with cafes, coffee shops or members clubs. But it also threatens the long term supply of affordable spaces for new and growing businesses – especially for sectors and communities not always favoured by policymakers, a point I’ll come back to.

High streets are also undergoing profound disruption from online retail. In some places, empty units are driving some landlords into finding meanwhile uses. In London especially, business rate revaluation has also hugely driven up costs: subdividing shop units is one way to flatten the impact on tenants.

There are big questions here: about the balance of structural and cyclical forces, and how these play out in different sectors and communities.

For academics, there’s also a bigger intellectual challenge – to locate these forces in the larger recent history of urban places and urban economies. As Michael Storper highlights in his recent lecture, big cities are ‘learning machines’ that help innovation and entrepreneurship to happen. But the feedback mechanisms that drive urban economic growth also create persistent disparities between cities – and within them.

In cities like London, much of what we’re seeing today is ultimately a product of improving urban fundamentals plus technology, globalisation and policy shocks from the 1970s onwards. For urban economists, cities grow because the net benefits (agglomeration economies, amenities) outweigh the negatives (pollution, congestion, stress, high costs). What will future shocks – automation, climate change – do to this calculus?

Back to the street. Much of the workshop discussion focused on distilling the key features of flexible urban spaces for SMEs, and starting to make links between them. We focused on three – innovative use of high street retail units; co-working spaces and more structured incubator and accelerator variants; and pop-up spaces – but participants also highlighted the role of informal spaces as part of a portfolio of locations where work gets done (see also home-working, cafes, libraries).

What would a common framework for analysing all of these practices look like? It needs to start with space/time flexibility: imaginative configuration of both is the key distinguishing feature. Single shop units are recut into multiple spaces (internet cafe, clothing, mobile phone repair); co-working spaces offer slices of a building, sometimes on a time-share basis (hotdesking, or capped usage); pop-ups are time-limited activities, sometimes meanwhile use, sometimes multi-use of the land underneath.

Our typology might also include status (degrees of formality / informality); scale (high streets though industrial estates to business centres to parts of buildings); support (from zero, to social/community networks, to structured programmes of mentoring, networking and finance); participants (different sectors, business size and age; connections to specific local communities); locations in the wider urban system (centre vs periphery; more vs less well-off), and where these exist, operator business models (profit vs non-profit).

What are the benefits of these spaces? In theory, all of them offer at least some of the following:

To translate these to particular cases, we need to think about what drives participants – choosing an entrepreneurial lifestyle? Being pushed into it through lockout from more mainstream economic institutions? Are they choosing a convenient space close to home? Are they looking to ‘learn how to be an entrepreneur’? Are they already part of an economic or socio/cultural community? Do they want to grow a profitable firm, or is it a lifestyle business? Equally, how do participants’ backgrounds, motivations and constraints intersect with what landlords, or programme managers are looking to achieve?

Understanding this real-world complexity is particularly important, given how these different practices are currently seen by local policymakers.

Much of local government right now is heavily growth-focused, for understandable reasons [full disclosure: I help run the What Works Centre for Local Economic Growth. In London, the new Mayor is developing the concept of ‘good growth’, and other city leaders are exploring similar inclusive growth ideas.

One set of questions is very nuts-and-bolts: what do these spaces achieve, in economic and social terms? How big are these impacts? In the case of co-working, incubators and accelerator spaces, at least, we now have good evidence that these tools work in growth terms, but still many questions about how that happens.

So we need to know more about *how* these spaces and practices work, and *for whom*? Who has access? To whom are they marketed? Who feels comfortable / uncomfortable in them? For example, high street retail offer lots of entry-level jobs. Are these also ‘good’ jobs? Creative industries firms may be highly innovative – but do they offer secure employment, and to whom?

More broadly, we need to think about cumulative impacts. If co-working spaces help tenant firms to innovate, what are the long term effects of a city full of incubators? How might the growth trajectory change? Similarly, if an ‘ordinary’ high street supports hundreds of jobs, how does that scale up across a city with hundreds of such streets?

Given all of that, what should policymakers’ overall stance be? Encourage? Incentivise? Provide? Regulate? Can we do better than the current policy mix?

A second set of issues that came up during the day was tougher. We heard about many cases where government evidently values some locations, practices and protagonists (‘up and coming’ areas, tech startups, the shinier end of co-working, farmers’ markets, white and/or middle class business owners) over others (‘ordinary’ high streets, ‘messy’ spaces, regular markets, minority ethnic-headed businesses.) At minimum, this risks undervaluing the latter. In cities like London – with significant housing and land market pressure – it can lead to damage or disappearance. (For example, Wards Corner in Haringey.)

If we think about *all* such flexible SME spaces as parts of ecosystems, does this help us frame and make the case? Perhaps. We began to sketch out what persuasive evidence might look like. Identifying employment and turnover numbers and business rates ‘take’ across different types of spaces (‘shiny’ and ‘ordinary’) is part of this, as is highlighting the human capital of different communities of proprietors, and also, perhaps, highlighting the wider urban economics of diversity. At the same time, as researchers we also need to work with policymakers to develop better ways to assess non-economic benefits. And to restate the broader political case for cities with a true diversity of users and uses.

Max Nathan is Senior Birmingham Fellow (Regional Economic Development) at Birmingham Business School, and is a Deputy Director of the What Works Centre for Local Economic Growth. He is an economic geographer with a background in public policy. His research focuses on urban economic development, in particular the economics of immigration and diversity; innovation systems and tech clusters; and public policy for cities, especially policy design and evaluation. Max has over 15 years’ public policy experience in think tanks, consultancy and government, including at DCLG as an ESRC-DCLG Senior Policy Adviser. Max also co-founded the Centre for Cities, where he ran the research programme for the Centre’s first three years. @iammaxnathan maxnathan.com