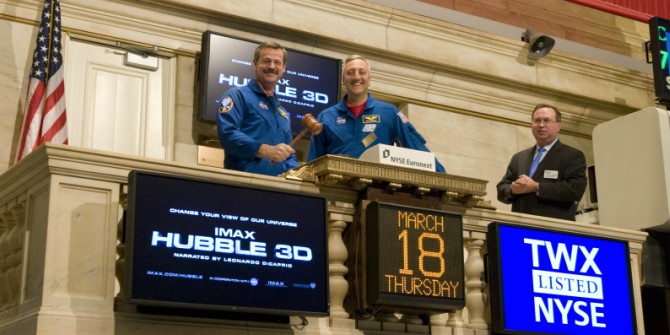 In Is the American Public Corporation in Trouble?, we examine the evolution of US public corporations over the last 40 years by comparing snapshots in 1975, 1995, and 2015. We begin by examining the number and size of public firms. There were 4,819 publicly listed US corporations in 1975. That number increased to 7,002 in 1995 and peaked at 7,507 firms in 1997. By 2015, only 3,766 listed firms existed. In contrast to the sharp rise and fall in listings, the market capitalization (in 2015 dollars) of listed firms fluctuated over the last forty years. The aggregate market capitalization of public corporations was seven times larger in 2015 than in 1975. The end result of the these trends is that there are fewer public corporations, but the ones that remain are much larger. This increase in size was accompanied by a striking increase in the concentration of assets. In 2015, 35 corporations accounted for half the assets of public corporations. In 1975, 94 firms did.

Figure 1. The number of US public firms vs. aggregate market capitalisation 1974-2015 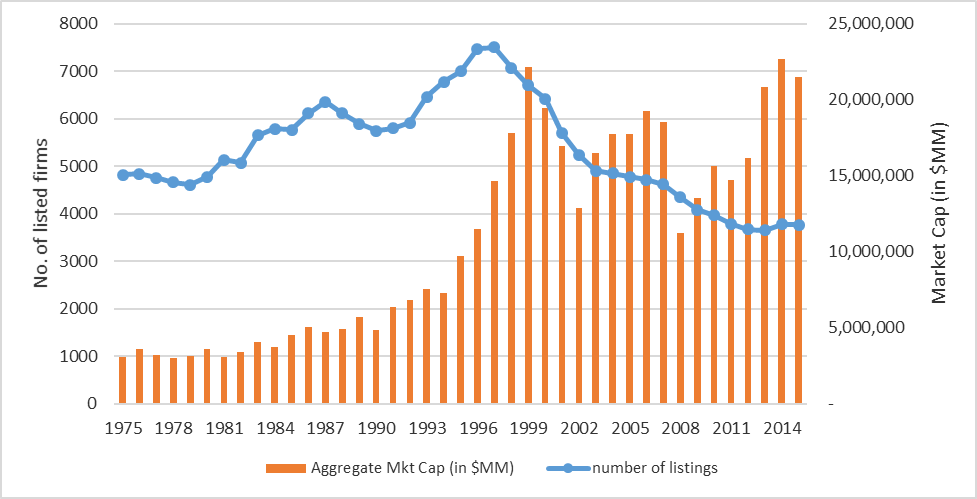 The average profitability (defined as operating income before depreciation minus interest and taxes, divided by assets) of public firms has decreased over time. A substantial proportion of this decline is related to the rise of R&D. Accounting rules dictate that R&D is expensed while capital expenditures are not. Even after adjusting for this, however, profitability has declined. Although performance has declined for the average firm, the winners have done well. In 1975, 109 firms earned 50 percent of the total earnings of public firms; by 2015, 30 firms earned 50 percent of aggregate earnings. Moreover, the earnings of the top 200 firms by earnings exceeded the earnings of all listed firms combined in 2015, indicating that the aggregate earnings of firms not in the top 200 were negative.

We also examined how corporations finance themselves. Compared to 1975, public firms have less debt on average. Perhaps the best measure of financial health is net leverage, defined as the ratio of debt minus cash over total assets. In the first half of our sample, the average net leverage ratio was 12.1 per cent; since 1995, it has been 0.7 per cent. This ratio was negative in most years from 2003 to 2014, indicating that firms had more cash than debt in those years. If we examine asset-weighted averages, which weight large firms more heavily, the asset-weighted averages of leverage and net leverage in 2015 were approximately the same as in 1975, i.e., leverage has not declined for large firms.

Finally, we examined changes in payouts to shareholders. Average dividends per dollar of assets were lower in 2015 than in 1975, in spite of the fact that dividends have increased by a factor of three since 2000. Share repurchases are much higher now than either twenty or forty years ago. Since the late 1990s, public corporations paid out more in repurchases than in dividends. Because of this increase in repurchases, more net income was paid out to shareholders in 2015 than in any other year in our sample.

However, Jensen’s prediction of the rise of private equity has proven true. The rise of private equity may be a contributing factor to why fewer firms choose to participate in the public markets. The firms that remain public are survivors. A small number of firms account for most of the market capitalization, net income, cash, and shareholder payouts of public firms. At the industry level, revenues are more concentrated, so there are fewer public firms competing for customers. A large fraction of firms are unprofitable every year, especially at the end of our sample period.

The increase in unprofitable firms indicates that many public firms are fragile and helps explain the high level of delistings. While it may be in the best interests of shareholders for firms to behave this way, the end result leaves us with fewer public firms, which gradually become older, slower and less ambitious. Fewer new private firms are born, as the rewards for entrepreneurship are not as large. And those firms that are born are more likely to lack ambition, as they aim to be acquired rather than conquer the world.

René M. Stulz is the Everett D. Reese Chair of Banking and Monetary Economics and the Director of the Dice Center for Research in Financial Economics at The Ohio State University. He has also taught at the MIT, the University of Chicago, and the University of Rochester. He received his Ph.D. from the MIT. He was awarded a Marvin Bower Fellowship from the Harvard Business School, a Doctorat Honoris Causa from the University of Neuchâtel, and the Risk Manager of the Year Award of the Global Association of Risk Professionals. In 2004, the magazine Treasury and Risk Management named him one of the 100 most influential people in finance. Reuters includes him in its list of the world’s most influential scientific minds. He is a past president of the American Finance Association and of the Western Finance Association, and a fellow of the American Finance Association, the European Corporate Governance Institute, the Financial Management Association, and the Wharton Financial Institutions Center.