Bubbles and crashes: A vicious cycle of self-fulfilling investor sentiment

Bubbles and crashes: A vicious cycle of self-fulfilling investor sentiment 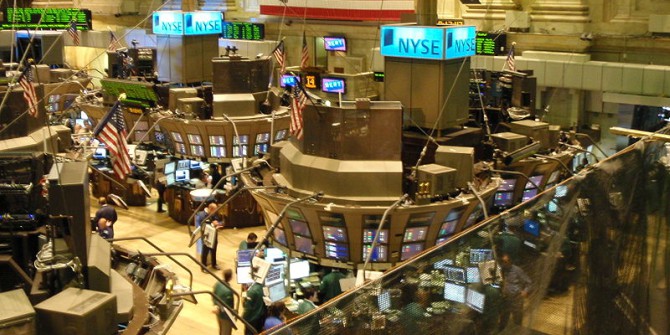 What causes financial bubbles? Before the 2008 crisis, this question was often neglected, but after the recent meltdown of the global financial market, it has attracted renewed attention among academics and policy-makers.

Before the crisis, the majority of economists assumed that investors trade financial assets at the so-called fundamental price, which reflects the “real” economic value of companies. In fact Eugene Fama received the Nobel Prize in 2013 for his efficient market hypothesis, which formalises this approach under the assumption of rational expectations: individuals and organisations are assumed first to be able to make unbiased forecasts of future asset prices; and second, to take optimal trading quantity decisions conditional on these forecasts. As a result, asset prices stabilise at an equilibrium level, and large bubbles are unlikely to emerge.

Unfortunately, it is not an easy task to empirically test rational expectations. Whenever a price of a real asset deviates from its fundamental value, it is difficult to assess which of the two elements of the rational solution failed: whether it is caused by the market participants’ incorrect forecasts, or by non-optimal trading quantity given their price forecasts. In addition, it is often unclear what the fundamental value of an asset is, and how large the bubble is – and how severe are the effects of poor forecasting and ill-trading.

To study this issue, we designed a laboratory experiment with human subjects based on a simple market of a risky asset. The advantage of the experimental approach is that the researcher can control the fundamental value of the asset and directly observe the decisions of the subjects (in particular price forecasts are often unobserved in real markets). As a result, we obtain a clear picture of how large are potential financial bubbles, and what exactly is causing them.

In fact, there exists a large literature on experimental finance, which goes back to the work of another Nobel Prize winner, Vernon Smith. However, these studies typically deal with only one aspect of the rational hypothesis: subjects are asked only to trade asset, or only to forecast its price. In our experiment, we combine these two into one market.

The participants in the experiment play the role of professional analysts or financial traders. The asset price is determined by a price adjustment process based on aggregation of all individual forecasts or trades. There are three treatments:

We find substantial deviations of the market price from its fundamental value in all treatments, but the deviations in T2 (on average 24.7%) and T3 (on average 36.0%) are larger than in T1 (on average 9.5%). The figure below shows the price dynamics in a typical market from each treatment (note that the plot for T3 is rescaled): 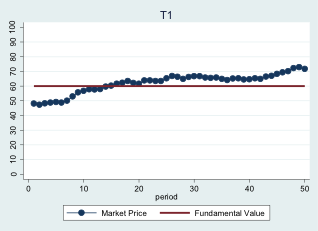 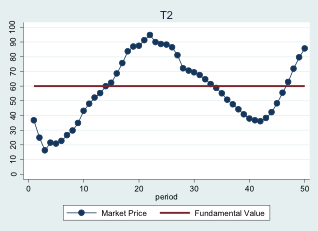 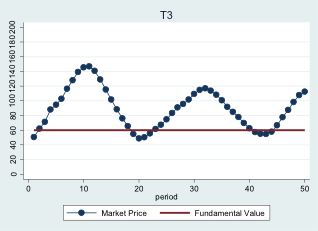 In the two treatments with trading (T2 and T3), we observed some “super-bubbles” that did not occur in the forecasting treatment. Subjects, with their non-optimal trading decisions, can temporary coordinate on buying or selling sprees, which causes repeated bubbles and crashes.

Mispricing is therefore a robust finding in speculative asset markets, and results from the joint forces of subjects’ failure to make unbiased price predictions and, to a larger degree, their failure in calculating optimal quantity decisions given one’s own price forecast. It follows that the efficient market hypothesis is incorrect, and that financial bubbles and crashes are a robust and endemic feature of financial markets. But why is this possible?

Our experiment, as well as similar experiments and other studies in behavioural finance, identify the reason to be the positive feedback feature of financial markets. Suppose that market traders expect an asset price to go up. In reaction, they want to buy more of the asset. Then the aggregate asset demand increases and as a result the asset price itself goes up, as well as its profitability. Individuals and organisations thus have almost self-fulfilling beliefs and learn to coordinate and follow the crowd. As a result, bubbles and crashes emerge in a vicious cycle of self-fulfilling sentiment of market investors.

These insights from behavioural models are in sharp contrast with the benchmark rational model, where bubbles do not form and markets are efficient. It is important that models for macro-financial policy analysis take these behavioural features of complex financial systems into account, as stressed in a recent paper (Battiston et al, 2016).

Recent research (Bao and Hommes, 2017) on experimental housing markets shows that bubbles disappear when adding a sufficient amount of negative feedback (that is, more elastic housing supply). This gives policy insights for how to mitigate and stabilise financial bubbles by managing the positive feedback in complex financial systems.

Cars Hommes is professor of economic dynamics at the University of Amsterdam. He holds a Ph-D in mathematical economics from the University of Groningen. In 1998 he obtained a prestigious Pionier-grant from the Netherlands Organization of Scientific Research (NWO) to start the Center for Nonlinear Dynamics in Economics and Finance (CeNDEF), an interdisciplinary research group on complex systems applications in economics and finance. He held visiting positions at University of Wisconsin, Stanford University and New York University. He is particularly well known from his influential work with William Brock on a behavioural theory of heterogeneous expectations and its applications to economics and finance.

Tomasz Makarewicz is a post-doctoral researcher at Otto-Friedrich-Universität Bamberg’s Economic Department. He finished his PhD in economics at University of Amsterdam in 2014, under the supervision of Cars Hommes, after which he worked at the CeNDEF UvA and MACFINROBODS projects. Tomasz studied economics at Warsaw University, Central European University and Tinbergen Institute. He also holds MA degree in philosophy from Warsaw University.