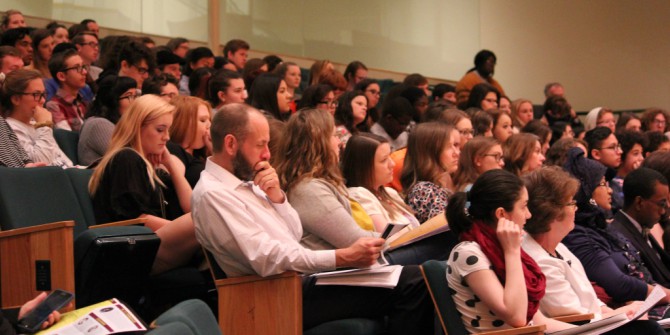 As business and management educators we have a role to develop greater awareness and appreciation of diversity in society and our workplaces. Gender should be on the agenda of business schools. Gender-inclusive organisations and gender-inclusive management and leadership should be non-negotiable. Business schools have ethical, social and economic imperatives for integrating gender inclusivity into their cultures and curricula.

The silence in curricula about how gender continues to influence individuals’ aspirations and how others use your gender as a reason to hinder your aspirations – has to be broken. The young people we work with as educators are the business and organisational leaders of tomorrow. They are citizens and leaders of our society. Yet we are not doing enough to educate them about the persistence of stereotypes in hindering women’s aspirations and progress.

If we cannot ‘see’ women leaders and managers in our everyday lives then women in these roles remain invisible, unusual, and progress towards gender equality in the UK will continue to be slow. Since 2014, with colleagues Valerie Stead and Jannine Williams, we have had the support of the ESRC to investigate how women professionals and leaders are misrepresented across all forms of media; from broadsheet newspapers to television programmes and social media. The research was initiated due to the media’s critical role in society and its influence in shaping workplace realities.

Media representations of women leaders and managers are often absent or gendered, sexualised and evidenced by contradiction. For example, on the one hand we see the championing of women leaders, and on the other a media focus on women’s hair, makeup, clothes, children, weight etc. , calling into question their presence and competence.

Our research has involved diverse and innovative methods: 1) eight separate research events across the UK, including an international conference and an event in the House of Commons hosted by Ruth Cadbury, MP; the gathering of ethnographic data, including group discussions; 2) textual and visual examinations of media outputs that profile women political leaders; 3) interview discussions with media producers.

A salient illustration of this can be seen in Hilary Clinton’s new book, and Harvard University research into media bias against Hillary Clinton during the last presidential campaign.

Time to get our house in order – what can business schools do?

Is the time right for gender inclusivity in 2018? Have we reached a tipping point in Western society when sexual harassment and sexual abuse are being outed so that gender and gender inclusivity discussions can be visible and normative in business and management education?

Will the Athena Swan Charter led by the Equality Challenge Unit be incentive enough for business schools to get their house in order?

We offer some ways of starting the gender conversation:

Carole Elliott is Professor of Human Resource Development at Roehampton Business School, University of Roehampton, UK. Carole is an international gender in management and leadership scholar. She is the editor-in-chief of Human Resource Development International, a former board member of the Academy of HRD, Academic Fellow of the CIPD, and Fellow of the Leadership Trust Foundation. She is the Principal Investigator on an ESRC Seminar Series Gendered Media Mis(s)Representations of Women Professionals and Leaders and her further research interests are in women leaders’ learning experiences, gender and diversity in management learning, and critical HRD. She has published in journals such as Organization Studies, Management Learning, International Small Business Journal, Studies in Higher Education, Human Resource Development International and Gender and Management: An International Journal. Email: carole.elliott@roehampton.ac.uk