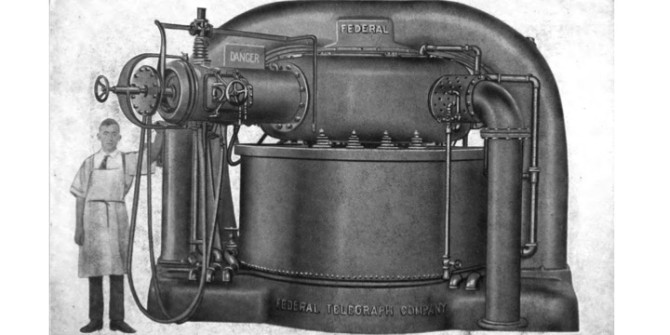 Looking for an explanation of Silicon Valley’s high-tech? A key factor is hiding in plain sight: The significance of the Valley’s location in the 20th century United States. Not the latter 20th century of personal computers, video games, and a young Internet—that’s no secret. Rather, the early 20th century, when American imperial ambition fuelled technological advance and entrepreneurial activity.

Start-ups have high attrition rates, and one way to survive the “Valley of Death” (an extended period of negative cash flow) is to secure a motivated resource-rich customer. The U.S. Navy played that role for Silicon Valley’s early entrepreneurs. Well before World War II, the Valley entered America’s modern military-industrial complex as a source of communications technology.

In communications, America’s ability to lead in wireless (radio) could balance Britain’s dominance in cables. American aspirations to displace Great Britain as a global telecommunications hegemon had guided U.S. policy since the beginning of the 20th century, when the fastest transoceanic medium of communication had been undersea cable. Information sent via cable could be selectively delayed, distorted, or denied by the carrier’s owner—and Great Britain owned about two-thirds of the world’s cable system. The result was an international scramble for wireless capabilities.

The first American wireless age, in the wake of the 1898 Spanish-American war, accompanied the United States’ acquisition of the Philippines, Guam, and Puerto Rico. Soon after, the United States acquired the eastern islands of Samoa, annexed Hawaii and the Canal Zone, and established Cuba as a protectorate. The world’s newest empire needed a telecommunications system. In August 1912, Congress appropriated one million dollars for a trans-Pacific chain of wireless stations requiring powerful transmission equipment.

That became the salvation of the Federal Telegraph Company, a Stanford University spin-off founded in 1909 with operations in Palo Alto. The company’s first revenues came from a wireless challenge to Western Union’s wired telecommunications network in the western United States. After its initial business model failed, Federal’s lifeline came from the U.S. Navy and the State Department, providing the company much-needed revenue and protection from British competition

In April 1913 the Federal Telegraph Company received a sole-source Navy contract to provide a transmission device for the Canal Zone. The contract was written to preclude a bid from the Marconi Wireless Company of America, a subsidiary of the British Marconi Company, Federal’s most formidable competitor. Established in 1899, American Marconi had exclusive American rights to the patents of wireless pioneer Guglielmo Marconi and enjoyed access to the resources of the British Marconi Company.

The 1913 contract was just the beginning; Federal provided communications equipment for American naval vessels and for high-powered radio stations at U.S. overseas possessions. During the next six years, the Navy purchased nearly $3 million of equipment from the Federal Telegraph Company.

In 1915 and 1916, the Federal Telegraph Company became America’s preferred entrant in the Latin American commercial radio market. In the spirit of the Monroe Doctrine, U.S. diplomats in five countries helped to block American Marconi’s entry.

Even after America’s 1917 entry into World War I, the Navy harboured suspicions of its British ally. An April 1918 agreement by the cash-strapped Federal to sell its radio stations and wireless patents to American Marconi generated a prompt U.S. response. Concerned about potential British control of wireless, within weeks the Navy successfully countered the offer.

Three years later, at the request of the State Department, the Navy agreed to “sell” the patents back to Federal Telegraph—at little or no charge. This was in support of Federal’s ultimately fruitless effort to establish an American telecommunications beachhead in China. Ultimately, for a 1918 investment of $1.6 million, the Navy kept no intellectual property. The real value had been assuring that American Marconi, a firm with British connections, did not acquire the Federal Telegraph Company’s patents.

In 1919, the Navy proposed a larger measure to diminish British influence: establishment of a regulated American radio monopoly to compete with the British Marconi Company. The result was creation of the Radio Corporation of America (RCA), and the disappearance of the American Marconi Company. RCA’s creation involved cross-licensing agreements with AT&T, General Electric, Westinghouse, and the United Fruit Company—but not with the Federal Telegraph Company. Having already sold its intellectual property to the U.S. Navy, Federal had forfeited its primary asset.

In 1964, Stanford University’s provost and onetime Federal employee, Frederick Terman, wrote that “with proper management, the Federal Telegraph Company could have been RCA”—the world’s most significant radio firm. Instead, Federal was acquired by the International Telephone and Telegraph Corporation in 1928, and moved to New Jersey after more than two decades in the San Francisco Bay Area.

Despite its departure from the region, the Federal Telegraph Company is important because it blazed a path that subsequent Silicon Valley firms followed. Through its relations with the U.S. Navy, Federal Telegraph contributed to and benefited from the defence needs of the world’s budding superpower. Subsequent start-ups, including key entrants in electronics equipment (Hewlett-Packard, 1938), vacuum tubes (Litton Industries, 1945 and Varian Associates, 1948), and semiconductors (Fairchild Semiconductor, 1957), owed substantial early revenues to work for defence agencies. Such relationships were crucial to the Valley’s development.

Silicon Valley today symbolises the confluence of disruptive technology and creative destruction. Focusing on market forces to explain early developments can lead to a misunderstanding of how the Valley came to be. The saga of the region’s first major high-tech firm shows the centrality of firms who responded to technology demand as an industrial extension of American foreign policy.

Stephen B. Adams is a Professor of Management at the Franklin P. Perdue School of Business at Salisbury University. His research interests are entrepreneurship and innovation; business/government relations; and the role of higher education in economic development. He is the author of Mr. Kaiser Goes to Washington: The Rise of a Government Entrepreneur and (with Orville R. Butler) Manufacturing the Future: A History of Western Electric. Articles based on his Silicon Valley research have appeared in The California Management Review, Enterprise and Society, Minerva, Research Policy, in addition to a forthcoming article in Business History. He can be reached at sbadams@salisbury.edu.