But the ability of skill boosts to counter the effects of ageing seems to be smaller in countries with more educated workforces, write Rainer Kotschy and Uwe Sunde 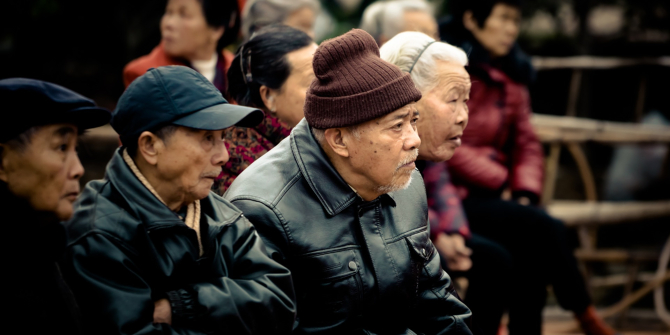 Population ageing is one of the most important economic and social challenges in the twenty-first century. With increasing life expectancy and falling fertility, the populations of most countries are growing older. Large cohorts are being replaced by relatively smaller but better educated young cohorts, resulting in substantial shifts in the workforce and its age and education composition.

Although these demographic dynamics can be expected to have major implications for macroeconomic potential and performance, the joint effects of population ageing and changes in the human capital endowment are still not well understood.

In our new study, we investigate empirically how changes in the age structure of the work force and the distribution of human capital affect macroeconomic performance, focusing on three questions:

Analysing data from a cross-country panel of more than 130 countries for the period from 1950 to 2010, we provide estimates of the effects of population ageing and of changes in the aggregate human capital endowment for macroeconomic performance. Unlike most existing work that studies these effects in isolation from each other, our approach explicitly considers the interactions between ageing and changes in the skill composition.

The results reveal that population ageing has substantial effects on economic performance even when accounting for changes in the education composition. The demographic structure affects economic performance non-monotonically, suggesting that prospective development paths will be crucially affected by the extent of the imminent population ageing dynamics. At the same time, the human capital embodied in the population has a significant positive effect on economic performance. The estimates also provide little evidence for eroding productivity of human capital attained in terms of formal education in older cohorts. Together this suggests that intensified education attainment compensates for negative ageing effects.

Quantitative simulation exercises based on these estimates shed light on the relative importance of the changes in the age and skill composition of the workforce that can be expected from the processes of population ageing in different countries, using population projections for age composition and education.

According to these simulations, ageing and a slowdown in education attainment will dampen economic performance, particularly, in economies where ageing is especially pronounced and the population has already attained high levels of education throughout all age cohorts. Investment into education turns out to be a powerful force in compensating the negative consequences of population ageing. This is illustrated by the projections that reveal a better future economic performance under the counterfactual scenario of a constant demographic age structure than under the projected demographic change. Fixing human capital at constant levels, on the other hand, would deliver a worse economic performance than the projection under the expected education expansion.

Figure 1. Simulating changes in the age and skill composition of the workforce 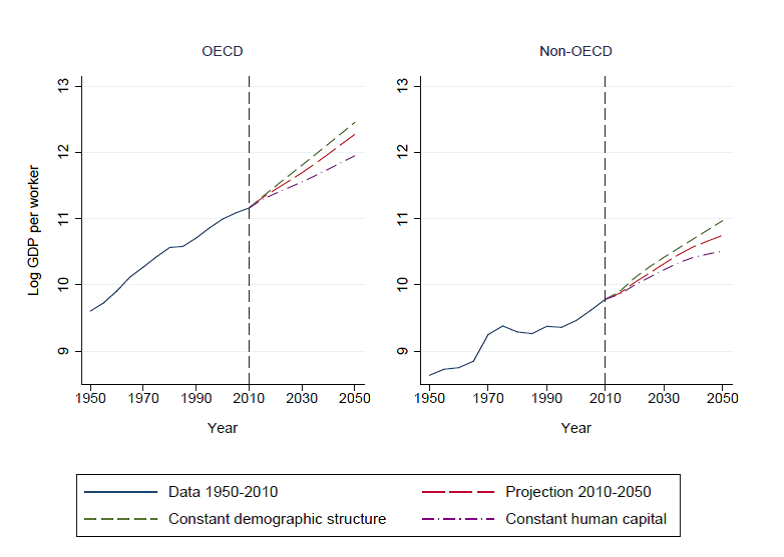 Nevertheless, the results suggest that continued education efforts are crucial for future macroeconomic performance. The scope of human capital improvements for compensating the consequences of population ageing, however, appears more limited in economies that age faster and that have a more educated workforce already.

As a consequence, these offsetting effects appear to be insufficient to compensate fully for ageing, particularly in those developed countries that face the greatest pressure of population ageing. In contrast, for economies with a relatively stable demographic structure, ageing is projected to have rather neutral effects on macroeconomic performance, while the projected increase in human capital implies positive performance prospects.

But the findings also make clear that without further improvements in the skill composition of the workforce in these countries, the consequences of population ageing will be much more dramatic. In particular, the estimates provide a method to quantify the increase in education that is required to offset the negative effects of population ageing in different countries. According to additional projections, increased female labour force participation, longer work hours, and skill-biased technical change will further attenuate the effects of population ageing, even though in terms of quantitative implications, they are unlikely to fully neutralise these effects or replace human capital.

In summary, an ageing population and a slowdown in educational attainment will dampen economic performance, particularly in countries where ageing is especially pronounced. Continued education efforts are crucial for future macroeconomic performance. But the scope of human capital improvements for countering the consequences of population ageing appear to be more limited in economies that already have a more educated workforce. To the extent that some of these economies also age faster, this poses a warning regarding the scope for education for attenuating the consequences of ageing.

Rainer Kotschy is a research assistant at Ludwig-Maximilians University in Munich. His research interests are in demographic and health economics, inequality, growth and long-run development.

Uwe Sunde is a professor of economics at Ludwig-Maximilians University in Munich; a research fellow at the Centre for Economic Policy Research (CEPR); a research professor at CESifo; research professor at DIW German Institute for Economic Research; a visiting scientist at Harvard University’s T.H. Chan School of Public Health; and a research fellow at the Institute of Labor Economics (IZA). His fields of interest are long‐term development and growth, political economy, labour economics, population economics and behavioural economics.