How the WPP board bungled Martin Sorrell’s departure

How the WPP board bungled Martin Sorrell’s departure 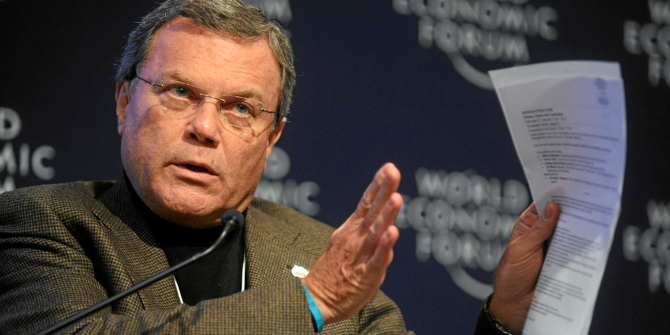 At first sight, Martin Sorrel’s departure from Wire and Plastic Products (WPP) — the company he founded and grew into an industry-changing and defining global force — underlines the importance and significance of independent-minded supervision of executive boards by non-executive directors. To many it appeared that the WPP board behaved impeccably when they appointed external legal advisors to investigate a whistle-blower complaint regarding the CEO’s personal conduct and use of company funds.

For some more easily assuaged media commentators, the WPP board has properly embraced its duty and ability to act independently on behalf of its shareholders and staff to determine company strategy, ethos and ethics (albeit only once they finally found the strength to investigate and dial back the strong leadership of the company founder).

For advocates of a ‘light touch’ corporate governance regime founded upon self-policing and old-school gentlemen’s agreements, rather than actual formal legislation, this is precisely the kind of teeth that professional and effectively run corporate governance oversight and procedures can provide on the executive floor. However, if considered more closely, the dramatic WPP decision is far from being the poster child of possible positive change for corporate governance generally or, even, a valuable lesson in what future better/best practice governance might look like for the all-powerful founders of companies.

In terms of context, comparatively, of course the global advertising sector has been remarkably free from the magnitude or deep damage that corporate mis-behaviours and scandal in the banking, retail or energy sectors (to pick just three) have inflicted upon society and shareholders alike. Additionally, over the last thirty-three years, Sir Martin Sorrell undoubtedly turned Wire and Plastic Products into an advertising giant conglomerate with an enviable market value of £14 billion and a talent roster of over 200,000 employees. For many, under CEO Sorrell’s leadership, WPP was frequently lauded (not least by Sir Martin himself, when justifying his remuneration and incentive scheme package awarded by the board) one of the great success stories of British business.

However, when the outcome of these investigations set in train by the board is the sudden departure of Sir Martin from the company, while covered by blanket binding non-disclosure agreements (NDAs), criticism of the WPP board for its lack of transparency is inevitable. Some saw a greater malaise including one of the UK’s leading entrepreneurs, Luke Johnson. In his column on this matter in the Sunday Times, Johnson raised some important wider corporate governance matters: “WPP has been a case study of a supine board and executive greed. In options, bonuses and share awards, he has collected over £200 million in the past five years alone. The fact that he departs under a cloud while keeping share incentives worth £33 million only adds to the impression of a tainted legacy.”

Sorrell’s sudden NDA-shrouded departure raises many questions about both the outlook for the global advertising industry and WPP’s strategy to address that while also demonstrating that corporate governance matters are rarely as they are initially spun and presented in business today.

Looking more closely, it is hard to imagine that Sir Martin would have left so quickly if the company had been going from strength to strength. Instead, the company is under enormous pressure. The shares have lost a quarter of their value in the past year — including a 9 per cent share price uplift (‘dead cat bounce’?) at the 2017 Q1 results press conference — while sales growth has been decelerating for the past three years.

The company has become a target for short sellers. Traditional brick-and-mortar advertising conglomerates such as WPP have suffered greatly due to the fragmenting power and rise of digital advertising, compounded by the successes enjoyed by their erstwhile ‘disruptive’ competitors Facebook and Google. At the same time, big advertising spenders, fast moving consumer goods companies such as Procter & Gamble, Unilever and Nestle, face severe cost and competitive pressures that have seen them reassess and cut advertising spend dramatically (for example, P&G has cut $750 million from its external advertising spending over the last three years alone).

These very negative changes in the market, along with the hardly secret significant impact of Facebook and Google upon competition and revenues within online advertising space, raise serious questions about the overall WPP strategy for the future. Nor do the previously successful Sorrell-era strategy of growing by cost-controlled acquisition, crossed with steady-as-she-goes stick-to-the-knitting, any longer look fit for purpose in the face of client budgetary and margin pressures, let alone online disruption. These are business strategies Sir Martin led and developed (and for which was so richly rewarded) that, in the absence of evidence to the contrary, the current board still appears to endorse after his departure.

Additionally, when it comes to organisational structure, WPP is a conglomeration of companies where several compete directly against each other, and several with different specialities might well simultaneously serve a single client. Economies of scale have not been fully realised. Understandably, there is speculation that, with Sorrell gone, WPP will be broken up (with its data analytics and PR businesses rumoured to be being sold first, despite new joint Chief Operating Officer Mark Read saying at the 2017 Q1 results presentation that it is “too early to speculate about specific asset sales”).

Inevitably, analysts argue — more strongly now that Sorrell is no longer around to argue back — that a break-up would increase the value of the company by eliminating the “conglomerate discount”. Not only do WPP shares currently trade at a much lower valuation than the shares of peers Publicis and Omnicom, but looking to the future, questions arise around how WPP and others in the industry will seek to increase agility, value and transparency

Though praised in some quarters for the leadership of its seasoned chairman Roberto Quarta, as well as the calibre, diversity and supervision of its board (with many nationalities and three female independent directors), there are also unanswered tactical-cum-strategic questions of concern about why, given the above pressures, uncertainties and competitive environment, the board compounded their very uncertain outlook by initiating this leadership crisis.

With no permanent CEO and no news of a successor either, the sudden loss of such combative leadership (and arguably the group’s driving force for the last three decades) looks strategically casual — especially when NDAs prevent full disclosure of possible sudden exculpatory reasons — and makes the WPP immediate future look very concerning. With competitors likely poised to swoop in on WPP’s client base, the need for the board to reassure employees, clients, market-makers and shareholders with a new, clear, cogently communicated strategic vision for the future is already overdue.

This self-inflicted public information black-hole from WPP looks even less strategically wise now that Sir Martin has made a song and dance about his new quoted venture S4 Capital and their not-so-veiled plans to compete head-to-head with his ex-employer with this newly minted “multi-national communications services business focussed on growth”. Though the best 21st century digital marketing agency will most likely win, from a WPP client and shareholder perspective this looks more and more of a corporate governance own goal.

It is also a strange irony of modern business that while listed companies claim to be more and more transparent in accordance with the Combined Code (the UK Corporate Governance Code), they are simultaneously also signing more and more confidentiality agreements. The non-disclosure agreement signed by Sir Martin was only the latest in a string of cases where top executives and boards have been barred from revealing the operational, legal, business and/or strategic details of their exit. Currently, in this instance, there is no way for current or future investors in WPP stock to know whether the board handled the whistle-blower complaint well or badly. Or even if Sir  Martin’s behaviour made his departure inevitable or was due to a disagreement over future strategic priorities. This uncertainty and lack of clarity is harmful to say the least.

As the recent Financial Times leader on WPP correctly observes, “When a public company is built around the vision and leadership of one man and that man suddenly departs, saying nothing is not an option. It is obviously a material event. Silence is also in the long run terrible for a corporate reputation. A company that dispenses public relations advice should know as much”.  With the departure of Sorrell allied to the subsequent lack of transparency and strategic leadership, in industry-appropriate parlance, perhaps WPP is the first proper buy-one-get-one-free corporate governance bungle-cum-mini-scandal provider in the global advertising sector.