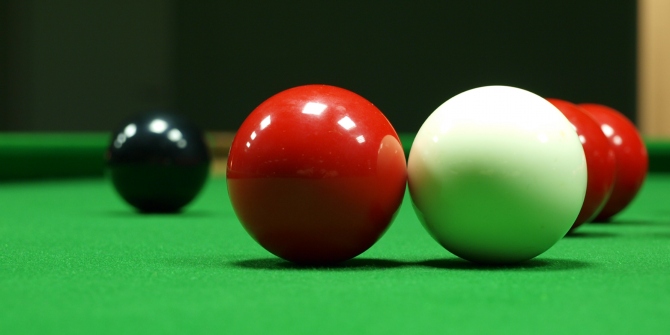 In 1961, Daniel Ellsberg (who is perhaps best known for leaking the Pentagon Papers, a top-secret study of the United States’ involvement in the Vietnam war) considered a thought experiment involving two urns, each containing 100 balls. The first urn contained exactly 50 black balls and 50 red balls, while the second contained 100 black and red balls in an unknown ratio. Ellsberg suggested that, if asked to bet money on a colour being drawn from one urn or the other, people would tend to choose the “known” bet in the first urn and avoid the “ambiguity” of not knowing the winning odds in the second urn. He labelled this behaviour ambiguity aversion, noting that such an anomaly would violate the basic assumptions of subjective expected utility theory.

In the fifty-plus years following Ellsberg’s conjecture, a large volume of empirical research has offered evidence that Ellsberg was indeed correct – the majority of people appears to exhibit ambiguity aversion, a phenomenon that has come to be known as the Ellsberg Paradox.

In our recent article, we identify a perception-based trait that lies at the heart of the Ellsberg Paradox. Our paper investigates two main questions:

To test these two questions, we first asked experimental participants to make a choice between bets in Ellsberg’s aforementioned standard two-urn scenario. Next, we asked them to make a choice in a more complex, but essentially equivalent version of Ellsberg’s scenario using decks of cards instead of balls and urns. We offered a slightly higher payout for the “unknown” bet in order to break any ties. In our analysis of people’s decision-making processes, we divided subjects into “low-“ and “high-comprehension” groups based on a series of screening questions designed to test their understanding of the more complex choice situation.

Addressing our first research question, we find support for the idea of complexity avoidance among “low-comprehension” subjects who tend to choose randomly between the two options in our more complex version of Ellsberg’s problem. This despite the fact that many of the same individuals exhibit ambiguity aversion when facing the original version of Ellsberg’s two-urn problem. In contrast, we find that more than two-thirds of “high-comprehension” participants who understand and think carefully about the choice situation continue to avoid the ambiguous option in our more complex version of Ellsberg’s problem.

To address our second research question, we consider individual differences in perception of the “ambiguous” bet. For the group of “high-comprehending” decision makers, the majority (69 per cent) were non-Bayesians in the sense that they preferred not to assign a subjective probability in the absence of objective odds. We referred to these subjects as “ambiguity-minded,” while their counterparts who did assign a probability to the “ambiguous” bet (as per subjective expected utility theory) were termed “probability-minded.”

A second key finding is that there is a strong link between subjects’ mindedness, and therefore approach to reasoning about probability, and their ambiguity attitudes. Among “high-comprehension” subjects, the “ambiguity-minded” cohort exhibited a higher rate (84 per cent) of ambiguity aversion than any other cohort in our study or in the literature. Likewise, the “probability-minded” subjects exhibited the smallest propensity for ambiguity aversion (31 per cent). In particular, “high-comprehension” subjects who assigned a subjective probability to an event were far more likely than not to treat that event as objectively having a probability of 50 per cent.

Our third key finding concerns the extent to which “mindedness” may be related to subjects’ degree of reflection, level of education, and extent of being analytic. To our surprise, we find that “ambiguity-minded” subjects tended to be more reflective, educated and analytic than “probability-minded” subjects who most resembled Bayesian decision makers. This runs counter to the intuition that sophistication and a Bayesian approach to decision-making are positively correlated among “high-comprehension” individuals.

More generally our study suggests that, while ambiguity aversion is important, task complexity and individual differences in elucidation of the ambiguous element(s) of a choice problem may be even more important determinants of behaviour in the overall population. Hence instead of considering ambiguity aversion as a uniform phenomenon, it may be more appropriately viewed as an aggregation of both task-level variation in subjects’ understanding of the choice problem, and individual-level variation in how subjects reason about probability. Any evaluation of the normative appropriateness of a response must be done relative to a particular individual-level interpretation of the task.