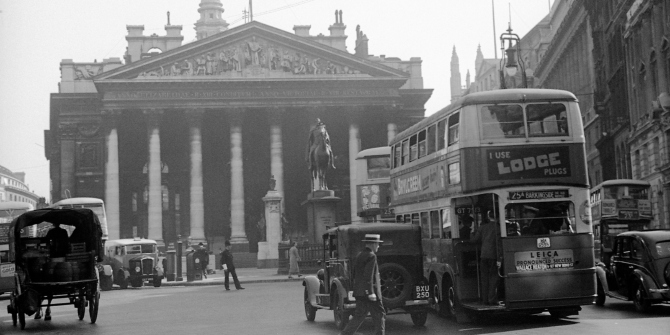 In a recent survey paper, Goldberg and Pavcnik (2016) note that trade economists have moved away from studying the impact of trade policy. Concluding that this may reflect the fact that trade policy has become so liberal, they ask a straightforward question: “Does trade policy matter?”, Indeed did it ever matter?

With Brexit looming, and protectionist pressures mounting elsewhere in the developed world, this question is now taking on an obvious significance that it did not, perhaps, possess five years ago. And so it makes sense to look once more at the experience of the interwar period, when there were protectionist policies galore whose consequences can be studied.

Surprisingly, most of the existing quantitative literature on interwar trade has tended to conclude that, notwithstanding the ferocious reputation of the Smoot-Hawley tariff and interwar protectionism more generally, these policies did not have a major impact on either the total value or direction of trade (Eichengreen and Irwin 1995, Wolf and Ritschl 2011, Gowa and Hicks 2013). Perhaps it is not so surprising that protection has emerged as a relatively minor contributor to the world trade collapse of 1929-33 – world income and output fell by so much during this period that it can plausibly account for the majority of declining trade, leaving relatively little for rising trade barriers to explain. But the quantitative literature has also tended to downplay the impact of trade policy on a second striking, and dangerous, feature of world trade during this period – its decreasingly multilateral nature.

In a recent paper, we revisit the responsibility of trade policy for the decline in trade and especially in the shift towards intra-imperial trade, but adopt an entirely different approach in tackling the issue. Rather than using aggregate trade flows on the one hand and country-pair block membership on the other, we study the actual (and discriminatory) trade policies pursued by one country – the UK – in great detail. We look at what one country actually did to build its trade bloc, and at what the effects of its policies were, using disaggregated, country, and commodity-specific data on both trade and trade policies. 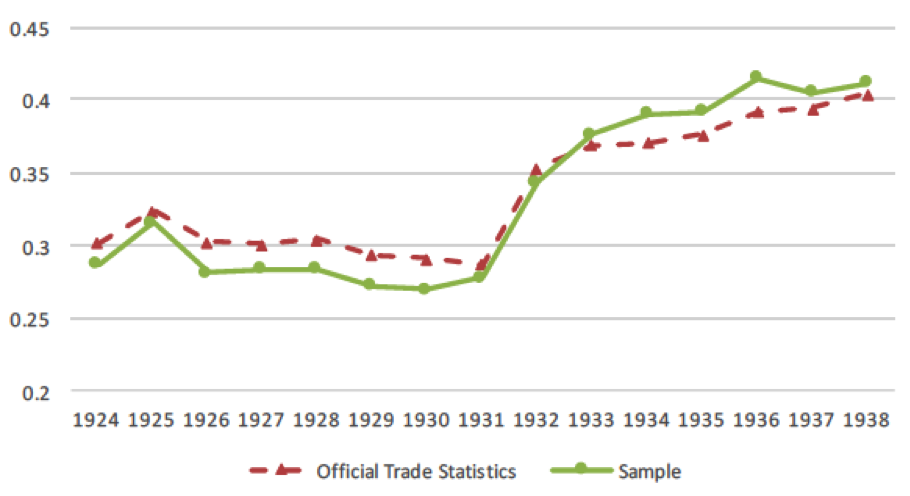 Figure 1 shows the British Empire’s share of UK imports between 1924 and 1938: the increase after 1931 is striking. In 1931, Britain decisively broke with a long-standing tradition of free, or free-ish, trade. In November of that year, the first emergency measures against ‘dumping’ from foreign countries were adopted and made increases in duties by up to 100 per cent possible. In February 1932, the Import Duties Act imposed a general 10 per cent tariff on goods not already subject to duties. While the Act exempted some important primary imports, it imposed even higher duties on some other goods. Finally, the Ottawa conference in summer 1932 led to a series of bilateral trade agreements between the UK and the Dominions. As a consequence, from late 1931, Britain thus explicitly discriminated against non-Empire countries under the lemma of “the home producer first, Empire producers second, and foreign producers last” (Richardson 1936: 138).

Armed with this information, we can calculate a theoretical ‘constant policy’ counterfactual for individual years in the 1930s, which assumes that the Import Duties Act and the Ottawa Conference had not happened and trade policy had stayed at its 1930 configuration, and compare this to the actual outcomes regarding trade and its composition by country and commodity, based on the seminal contribution by Broda and Weinstein (2006). 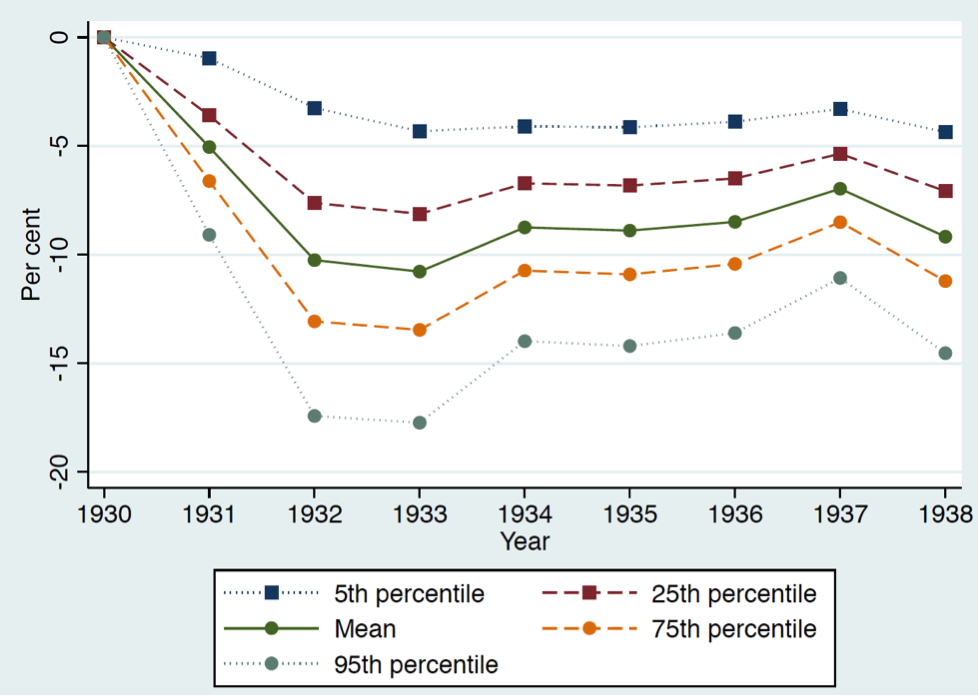 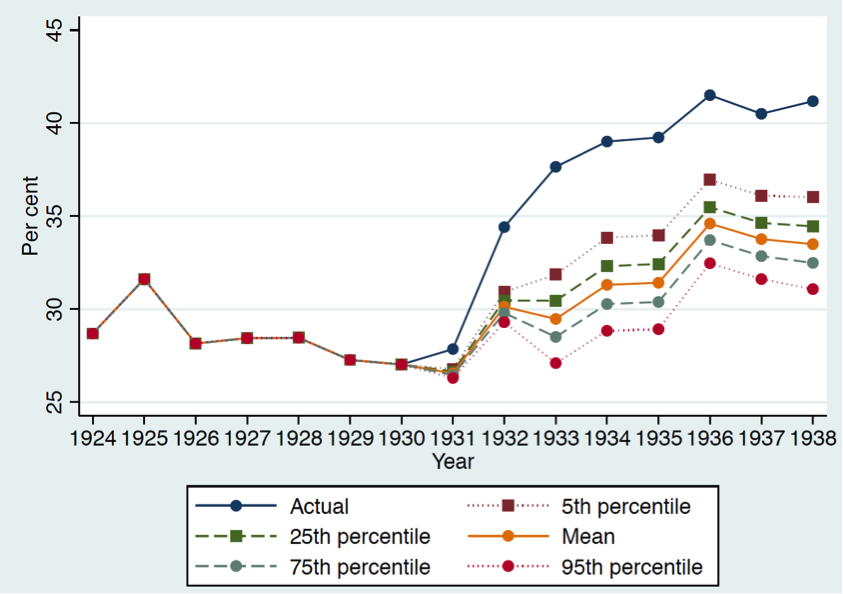 In contrast to this modest contribution of trade policy to the trade collapse, Figure 3 shows that tariffs and quotas explain most of the increased share of the Empire in British imports and thus the de-multilateralisation of British trade. If trade policy had remained frozen at its 1930 level, the Empire would have accounted for 31.4 per cent of UK imports in 1935 as compared to the actual 27 per cent in 1930, whereas in fact by 1935 it accounted for 39.2 per cent. This difference implies that trade policy was responsible for 77 per cent of the shift between 1930 and 1933, and 64 per cent of the shift between 1930 and either 1934 or 1935. These are big effects.

Markus Lampe is professor of economic and social history at WU Vienna University of Economics and Business since September 2015 and head of the Institute for Economic and Social History since October 2015.  Prior to these appointments, he was associate professor of economic history and institutions at the department of social sciences at Universidad Carlos III de Madrid.

Kevin Hjortshøj O’Rourke is the Chichele professor of economic history at All Souls College, University of Oxford, and the research director at CEPR. He is a fellow of the British Academy, a member of the Royal Irish Academy, and a research associate of the NBER. He received his PhD from Harvard in 1989, and has taught at Columbia, Harvard, University College Dublin, Sciences Po Paris and Trinity College Dublin. Kevin’s research lies at the intersection of economic history and international economics, particularly international trade. He has written extensively on the history of globalisation, and his Globalization and History (with Jeffrey G. Williamson) won the 1999 American Association of Publishers/PSP Award for the best scholarly book in economics. His latest book, Une Brève Histoire du Brexit (Odile Jacob) was published in 2018. An English language edition will be published by Penguin in January 2019.