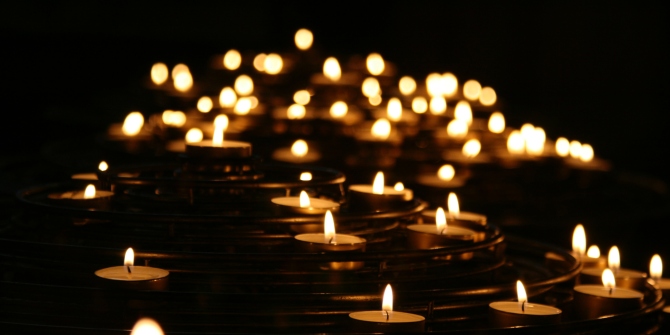 In monastic organisations, silence has always been at the heart of collective life. In that context, being and acting together are silent endeavours. Monastic movements started with pure and absolute loneliness; monks or sisters would escape the world and live a secluded life in a cave or a desert. For some, this experience was fulfilling. For others, it turned to hell, with reported mental breakdowns. These hermitic or semi-hermitic movements have been gradually replaced by coenobitic movements, which aspired for more collective and community-based spiritual lives. This was particularly visible in Christian movements (e.g. the Cistercian order).

Coenobitic monks spent all or parts of their lives in silence. They often prayed and worked in open places such as chapels, scriptoria, fields, and were ‘alone together’. Their autarkic way of life also meant that they had (and still have) to support themselves, occasionally with the help of others (i.e. lay brothers and farmers became part of a broader eco-system at some point). Self-production, ‘bricolage’, agriculture, arts and crafts, and community-based governance were at the heart of their political life. Rules (e.g. the Benedictine rules) were also there to structure and regulate community life.

Monastic organisations were thus proto-bureaucracies that were not noisy spaces of collective discussions, but, much more, were opportunities for individual spiritual quests hosted by a community. Silence was both an enabler of spiritual life, something giving a rhythm to collective life (with its duration and interruptions) and something embodying collective life (there would be no silence without a collective discipline to make it ‘happen’).

Interestingly, silence also appears as a key expectation in today’s work landscape, in particular entrepreneurial and innovative communities. Co-working spaces, makerspaces, fab labs, open spaces and digital environments are more often than not silent. In large, open places shared by several (and sometimes hundreds) of people, conversations cannot occur naturally. This may appear as a paradox in the context of collaborative and sharing economies that seem to involve noisy, continuous and collective conversations (with the underlying assumption that collaborating is a noisy undertaking).

Our recent research, based on an ethnographic study of a makerspace located in Paris, shows that silence is a very complex phenomena that both lies at the heart of contemporary expectations related to work practices and plays a central role in the apprenticeship of new practices. In the makerspace we studied, silence was maintained by continuous practices and postures. The location chosen by painters for their trails, the posture adopted by coworkers (more or less prone to eye contact), the expression of their faces and the continuity and dynamism of their activity were ways to avoid breaking the silence in which they were immersed. Importantly, silence was not experienced as emptiness; it was full of meaningful events, encounters and actions. In contrast, a ‘slow activity’, an open face and one’s body orientated towards the entrance of the room could be ways to show an openness to a conversation that could start in the workshop and continue in the closest liminal space (e.g. the corridor, the kitchen or the inner court). Should this not be too long or too noisy, the conversation could also take place ‘on site’.

Three points can be made with regards to the role of silence in new work configurations.

First, silence is not the opposite of noise. The majority of moments witnessed during our ethnographic research (and in other contexts) were full of (small) noises and continuous interruptions. Silence was constitutive of both an expectation and an atmosphere.

Second, silence is also wrapped into everything visible and expressed: in the breaks between sentences as well as in numerous places (e.g. cabin booth, inner courts, corridors, etc.). For the French philosopher Merleau-Ponty, silence is continuously there, potentially, invisibly, in everything we do.

Third, our observations stress the importance of silence for collective activities. Extended periods of silence and of immersion within artistic activities, together with the rhythms of silence, are landmarks for all the users of the makerspace. They give direction to the activities happening on all the floors of the space. Key conversational times (e.g. breakfast, social events and trainings) bring a meaning and a particular emotion, precisely because of the silence that precedes, succeeds or underlies them.

Interestingly, silence appeared in our research as something that is both organised and organising, in particular from a temporal and narrational perspective.

Other observations we conducted in coworking spaces, makerspaces, hackerspaces and fab labs (both corporate and independent) further highlighted the importance of the practice of silence. Interestingly, what seem to be simple and empty (silence) is full of improvisations, innovations, and collaborations. Silence is something that ‘happens’. In our tumultuous collaborative world, we see silence as a key political and managerial issue. New ways of working are in many ways in line with much older practices, such as those found in monastic organisations.