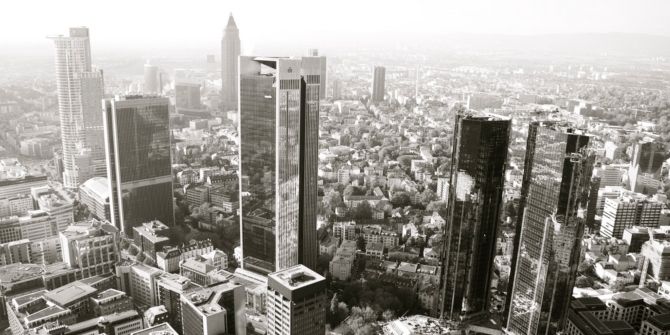 In preparation for Brexit, banks and other financial firms have been setting up offices in various EU cities and moving staff to them. In the case of ‘no deal’, we can expect more staff and functions to be moved. As a matter of prudence, the banks have anyway been required by their supervisors to prepare for a ‘no deal’ outcome in March 2019. What then are the post-Brexit prospects for London as a financial centre?

The City is a well-established global financial centre, and is currently the most important financial centre in the EU. It has well-known advantages (time zone, legal system, language, and London as an attractive city). It may well, in the longer run, realign its international business, following some loss of business to other European centres, and continue to thrive; but there is also likely to be a continued ‘tilt to Asia’ and a reassertion of Wall Street as the pre-eminent global financial centre.

The biggest risk for the EU27, apart from the increased costs of some financial products and services which are currently produced efficiently inside the single market (for financial services) in the City – and an increased risk of financial instability during the immediate post-Brexit transition period – is damage to its flagship capital-markets union project.

This project was launched in November 2014 under Lord (Jonathan) Hill when he was a European Commissioner. He resigned from the position after the Brexit referendum. It was conceived after the 2007-9 financial crisis and the subsequent 2010-2012 Eurozone crisis in recognition of the heavy dependence of the EU (particularly the EU27) on its fragmented banking sector.

This contrasted markedly with the US (and to a lesser extent the UK) in which debt (bond) and equity capital markets are much more developed and provide a much greater share of finance to the business sector. The prompt recovery of the US financial sector, and the country’s ability to deal with the post-crisis bad debt problems quickly and effectively, contrasted with the EU where capital markets were underdeveloped outside the City.

The CMU aims to achieve a ‘better’ allocation of capital in the EU and to reduce reliance on banking. This would take advantage of the freedom of capital pillar of the EU – and potentially reduce the fragmentation of small and medium-sized enterprise financing. The better allocation will in part reflect enhanced corporate governance mechanisms and good stewardship practices, rewarding socially and environmentally responsible policies, good governance and the UN Sustainable Development Goals, as well as profitability and productivity and growth enhancement. To be successful, bankruptcy laws would have to be applied consistently, with some sort of bankruptcy protection along the lines of the US ‘Chapter 11’ procedures. ‘Benchmark’ (ideally zero risk) bonds and bills for the capital markets would need to be established. There are numerous proposals about how such ‘Eurozone bonds’ might be created through joint issuance by participating states. So far, opposition has tended to come from states with stronger credit ratings, such as Germany.

The capital markets would operate more efficiently if taxes – especially on the profits of corporations and interest, capital gains and dividends, and securities trading – were harmonised. In addition, the bias within tax systems towards debt (through interest ‘expensing’ or ‘deductibility’) relative to equity financing should be addressed.

A no-deal Brexit would prevent the City from performing its central role in the CMU project. If a deal is negotiated between the UK and Brussels and accepted by Parliament, then the softer the Brexit, the greater the role the City can play. But a likely post-Brexit scenario is a tendency for more capital market fragmentation than at present, with various financial centres specialising in different financial spheres developing and major cities (perhaps Bilbao, for example) hosting regional capital markets. Capital markets would become more dispersed, but there would be much more widespread participation than in the prevailing City of London-dominated system. This may accelerate the switch away from banking-dominated systems in the EU27 and better serve the regions. In this digital age, the EU27 cities serving as capital market hubs could be fully networked to form a genuine Capital Markets Union.