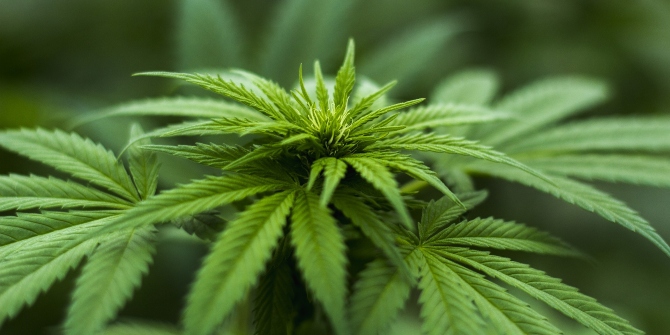 Most large criminal organisations engage in international drug trafficking. Organisations such as the mafia and Mexican drug cartels have a comparative advantage in the drug market because they are willing and able to engage in violent activity. Contracts concerning the trade of illegal drugs cannot be enforced in a court of law. Therefore, violence is the only means to enforce contracts, and to protect drugs from competitors and law enforcement. As a result, international drug trafficking markets tend to be controlled by organisations with a high capacity for violence.

Systemic drug violence comes at great social costs. It results in a lack of law enforcement and rampant property crimes, mafia-like taxation of small-scale entrepreneurs, migration and loss of workforce, not to mention countless personal tragedies.

In an effort to reduce drug violence policy makers almost always resort to policing and enforcement strategies. Existing policies to curb the activity of Mexican cartels include militarised deployment, and killing and apprehension of leaders. However, several studies show that these interventions are counterproductive in the sense that they escalate rather than curb violence (e.g., Dell 2015; Lindo and Padilla-Romo 2018). In our article, we show that an unexpected benefit of medical marijuana laws is that it has been successful in reducing drug-trafficking related violent crime.

Medical marijuana laws (MMLs) allow for consumption and cultivation of marijuana for medical purposes. However, the definition of medical purposes leaves ample space for discretion. As a result, in practice, these laws decriminalise consumption of marijuana, as well as small-to medium scale production of the drug. Since California passed the first MML in 1996, 33 states and the District of Columbia have followed as of 2019.

Traditionally, marijuana has been a lucrative crop for Mexican cartels, as the drug is easily cultivated in the country’s climate. However, with the introduction of MMLs, the illegal marijuana imported by the cartels has to compete with the legal supply of medical marijuana. Legal marijuana is fresher, there is a large variety and there is no personal risk of sustaining injuries while purchasing it. As a result, profit margins for Mexican cartels in the marijuana market have dropped drastically.

Lower profit margins reduce the incentive for Mexican cartels to engage in violence. On the one hand, the new laws reduce the benefit of using violence to protect the supply of marijuana. On the other hand, violence is costly to the cartels – recruiting, outfitting and maintaining the loyalty of soldiers is no cheap feat. Therefore, when the profits of the trade decrease, violent crime related to drug trafficking also decreases.

We therefore expect the introduction of MMLs to cause a reduction in violent crime in the US. The effect should be strongest in states at the border, such as California, Arizona and New Mexico, because Mexican drug cartels concentrate most of their violent activity close to the border.

In our study, we test these ideas by comparing violent crime rates (i) before and after the introduction of MMLs, (ii) between states that introduce MMLs and states that do not, and (iii) between MMLs states that border Mexico and MML states that are located inland in a difference-in-difference-in-difference framework. We draw on county-level crime data from 1994 to 2012 using the uniform crime reports and supplementary homicide reports collected by the FBI. These data disaggregated violent crime into homicide, assault, robbery, as well as specific circumstances of homicides that are mostly related to the activity of Mexican cartels, such as homicides associated with drug trade and gang conflict.

We find that when states on the Mexican border introduce MMLs, violent crime rates decrease by 13 per cent on average. As Figure 1 shows, the reduction in crime is strongest in counties that are in close proximity to Mexico, and the effect diminishes with distance. In line with our theory, we also find evidence for spillover effects. Whenever inland states introduce MMLs, we find that violent crime in the nearest border state decreases, as smuggling routes leading to the state now become less profitable. Among the border states, the effect is largest in California — a reduction of 15 per cent in violent crime, and smallest in Arizona – with a reduction of 7 per cent.

Figure 1. The effect of MMLs on violent crime by distance from the Mexican border 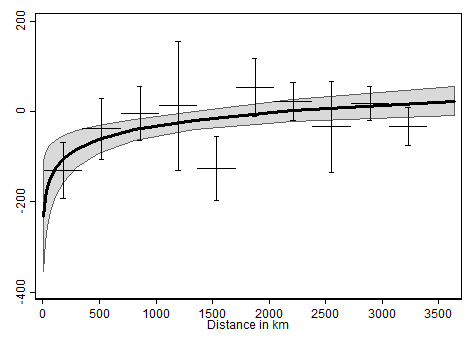 The crimes most strongly affected are robberies and homicides. Robberies decrease by 19 per cent, while homicides drop by 10 per cent. When we zoom into the homicides and try to distinguish the motive of the homicide, we find that murders related to the drug trade decrease by a staggering 41 per cent.

Our study provides new insights about reducing violent crime related to drug trafficking. Instead of investing in costly deterrence and punishment policies, policymakers should focus on introducing policies that reduce the profitability of drug trafficking. In this respect, legalising or decriminalising the production of illicit drugs can be an important tool, because it appears unlikely that criminal organisations, which rely on enforcing contracts through violence can outcompete legal competitors that enforce contracts in the court system.

Evelina Gavrilova is an associate professor at the Norwegian School of Economics. She received her PhD in economics from the University of Turin in 2014. She is currently collaborating on a grant from the Norwegian Research Council on the effects of the payroll tax. Her research interests include the economics of crime, assortative matching and taxation. She enjoys tinkering with data and learning new strategies to detect crime with it.

Takuma Kamada is a graduate assistant at Pennsylvania State University’s department of sociology and criminology/ His research interests intersect at illegal markets, race, and inequality across space and time. He studies sociological and criminological causes and consequences of illegal markets with a focus on race and inequality, using quasi-experimental research designs.

Floris Zoutman is an associate professor in public economics at the Norwegian School of Economics. His research interests include optimal taxation, political competition, and social insurance. He has been a visiting student researcher at UC Berkeley and a visiting scholar at CPB Netherlands Bureau for Economic Policy Research. In 2013 he received the IIPF Young Economists Award.