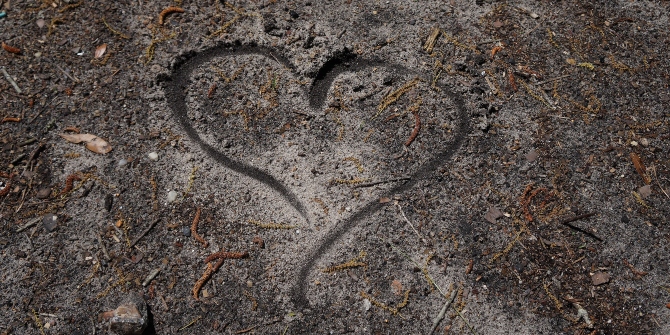 How would capitalism be if values such as environmentalism were tradable on a market? How would companies contribute to society if we could price not only goods and services, but also principles such as justice? Economic transactions involving the choice and practical implementation of socially relevant values may be an option to reconcile sustainability and profit, and, more in general, economics and ethics.

Business Roundtable, the association of chief executive officers of leading US companies, released in August a statement on the purpose of a corporation, signed by 181 chief executives. The statement highlights that while companies generate profits and return value to shareholders, they also should commit to delivering value to their customers, investing in their employees, dealing fairly and ethically with their suppliers, supporting the communities in which they work and generating long-term value for shareholders. This statement was commented with enthusiasm by those who believe that profit should not be the only aim of a company, and with concern by those who – in line with Milton Friedman’s thought -warned of an impending slide towards socialism.

Professor Reed Watson, the director of Clemson University’s Hayek Center for the Business of Prosperity, argued that the truth rests in the middle, as “maximising shareholder value over the long haul is socially responsible when corporations are forced to compete for customers and employees”. Also, soon after the last great financial crisis, more companies were managing sustainability to improve processes, pursue growth and add value, rather than focusing on reputation alone. More recent analyses have highlighted that the main motivations of corporate social responsibility include: to improve the corporate image, to increase customer satisfaction and to achieve cost savings. Therefore, it is not realistic for companies to pursue social responsibility without taking into due account the traditional objectives: to profit and return value to shareholders.

Market economies are essentially value-neutral: economic transactions are not influenced by the moral, organisational or cultural values held by the parties. Max Weber (1864-1920), the famous German sociologist and political economist, argued that the modern world features a “polytheism” of conflicting values. And he elaborated on the distinction between value rationality, i.e. the objective definition of what is intrinsically good, and instrumental rationality, i.e. the quest for means usable to pursue one’s subjective aims.

Following Weber’s account, it is possible to see that notions of good and bad, useful or useless, are often subordinated to one’s social role: in the case of companies, the generation of profit. But when a CEO knows that his or her notion of good is only confined to the interest of the company (for instance, in an oil company it may be hard to accept certain environmental standards), there will be no incentive either to adopt new practices in the firm, or to spread them to other companies. And when sustainability is only instrumental to profit, it may also be incompatible with it.

The possible role of a market for values

Companies obtain profit from selling products. And products are value-neutral. The very measurement of gross domestic product is based on a set of good and services that, from Weber’s perspective, are means, not ends in themselves. On the other hand, if we established a market where companies may exchange organisational values, profit would become not only compatible with social responsibility, but also dependent on it.

This is how I would structure this market. In a nutshell, companies (as well as local communities and individuals) would be able to exchange their experiences highlighting the benefits of principles such as propensity to innovation and environmentalism. It would be possible to exchange documents, each of which would list the experiences referred to a given value. Those would be certified based on quantitative indicators, decided by law (at the national level) or international agreement. In the case of environmentalism, the indicators may include a given reduction in CO2 emissions and a certain percentage of employees that do not need to drive to work (for companies), a given increase in green areas (for local communities) and a given amount of donations to green charities (for individuals). Compared with carbon pricing, this would offer three additional benefits for companies.

First, the presence of a certain number of targets among which a company can choose would allow it to decide in which way (beyond reducing emissions) to pursue more environmental, sustainable practices. While carbon credit schemes imply a compensation between the activities of two counterparties, they do not influence the behaviour of third parties. But if a company that complies exactly with an emissions cap wanted to improve its environmental impact through a market for environmentalism it could rely on the experiences of another company that has for instance diverted waste from landfills, or increased the disclosure about its supply chain, and undertake similar initiatives.

Second, saving money on carbon taxes means having a greater availability of a means of exchange (monetary resources) that is value-neutral and that, therefore, is not able to describe previous experiences or motivate any counterpart to choose and live new ones. On the other hand, adding to a document one’s positive experience from reducing emissions and selling that document would mean fostering a circulation of experiences that can be used in the future also by other firms.

Third, this market would make it possible to undertake initiatives that are consistent with other values (such as propensity to innovation and social justice) correlated with environmentalism, thereby enriching the set of sustainable practices undertaken in a given nation or region.

The price of each document would be proportional to the number of experiences listed in it, and the price of the experiences would be determined by demand and supply. Each document would be exchangeable with others referred to other values, as well as with goods and services. Companies would generate profit from choosing some socially relevant objectives, and from their practical implementation, which would make it possible to resell each document at a price higher than the purchase price.

The following is an example of a document tradable in this market, referred to the value “propensity to innovation”, and transferred from a company A to a company B, and then to a company C. 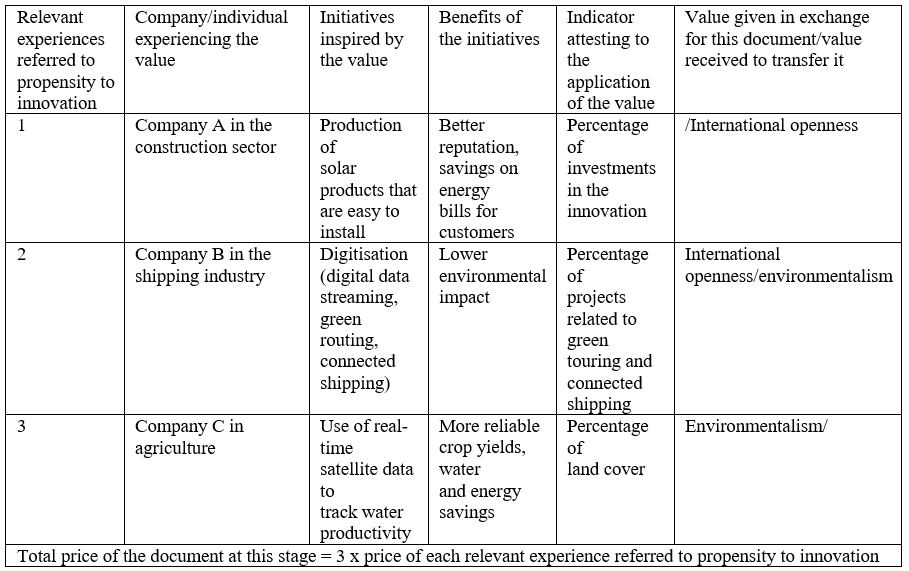 Marco Senatore works at the Ministry of Economy and Finance of Italy. He was previously an advisor to the International Monetary Fund’s executive board. He graduated in political science at the Sapienza University of Rome, and specialised in financial markets and the internationalisation of businesses. Marco is the author of  “Exchanging Autonomy. Inner Motivations As Resources for Tackling the Crises of Our Times,” published in 2014.

Marco Senatore works at the Ministry of Economy and Finance of Italy. He was previously an advisor to the International Monetary Fund's executive board. He graduated in political science at the Sapienza University of Rome, and specialised in financial markets and the internationalisation of businesses. Marco is the author of  "Exchanging Autonomy. Inner Motivations As Resources for Tackling the Crises of Our Times,” published in 2014.