There’s no such thing as mental retirement: older workers willingly engage in learning

There’s no such thing as mental retirement: older workers willingly engage in learning 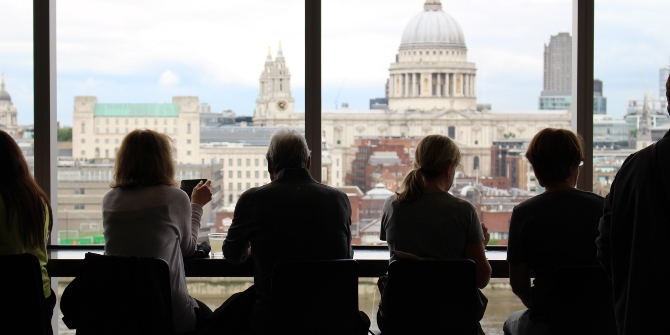 Prejudices about unproductive older workers are widespread. They are said to be slower, to be overwhelmed by modern information and communication technology (ICT), and to be sick more often. Based on these beliefs, it appears that employers discriminate against older individuals, which hurts their employment prospects. Moreover, if the beliefs are wrong, firms lose older workers’ potential for added value. At the societal level, wrongfully dismissing older workers is detrimental to economic prosperity because most OECD countries face both skills shortages and overburdened pension insurance systems due to ageing populations.

In a study, we put one aspect of this narrative to the test: Are older workers willing to learn? This question is becoming increasingly important due to accelerating technological change in most workplaces. During the COVID-19 pandemic, the sudden need to learn how to use digital technologies to work from home has pushed this even further.

Our results suggest that older people who are close to retirement are still interested in learning and acquiring new skills, even when they do not have to. They do not retire mentally. The study is the first to disentangle the intrinsic willingness of workers to learn – at a time when they are usually still in employment – from other factors, such as the requirements of the employer and the financial constraints on the worker.

Our research complements existing survey-experimental evidence that many older workers would work past retirement (Ameriks et al, 2020), and that older people are as competitive as younger ones (Charness and Villeval, 2009).

The setting: retirement and participation in community learning centres

To identify voluntary learning behaviour in older workers, we examine a partial retirement legislation in Germany, which was in place between 1996 and 2009. The reform encouraged many older workers to drop out of the labour market and retire up to five years early, with almost no deductions on their retirement income. Figure 1 shows that a large number of men enrolled in the partial retirement programme. At the peak in 2009 (the last year of programme entry), the number of participants amounts to 320,000 workers (8% of the population in this age group). Since most of them would have remained in employment in the absence of the reform, these people constitute an interesting group to study. The reason is that older workers who are in early retirement should have no monetary incentives to invest in work-related training. Likewise, there are no employer demands because the early retirees progress directly to full retirement after the conclusion of the programme. 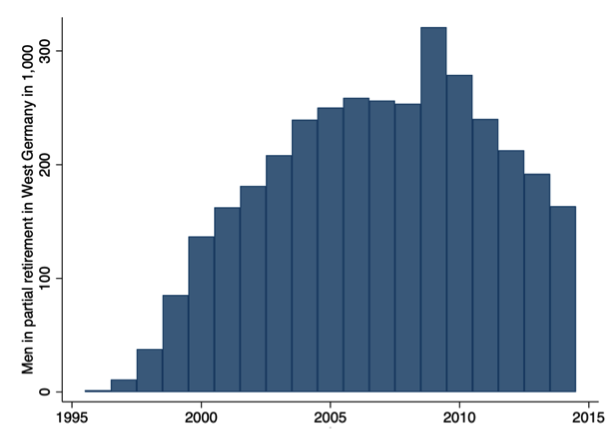 Notes: The bar chart illustrates the development of the number of men in the partial retirement programme in West Germany. Source: German Pension Insurance Fund (DRV), authors’ own calculations.

We combine the reform with data from community learning centres (CLCs), which exist in every German county and offer non-formal adult education for a small fee per course. We focus on participation in work-related courses because they are most similar to actual on-the-job training courses; CLCs even offer such courses to firms. Most of these courses teach ICT skills.

Throughout the analysis, we focus on men because male workers used the opportunity to retire early more frequently than women did. We also restrict the analysis to West Germany because the adult education sector in East Germany underwent a rigorous restructuring in the 90s after the fall of the Iron Curtain. 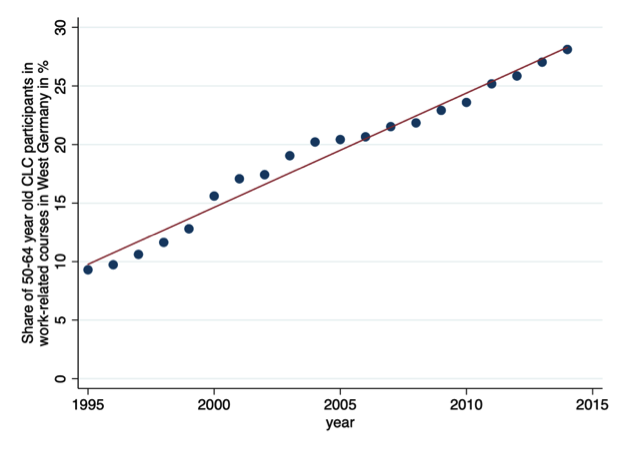 Notes: The binned scatterplot illustrates the development of the mean share of participations of persons between 50 and 64 years old in work-related courses in West Germany. Source: CLC statistics, authors’ own calculations. 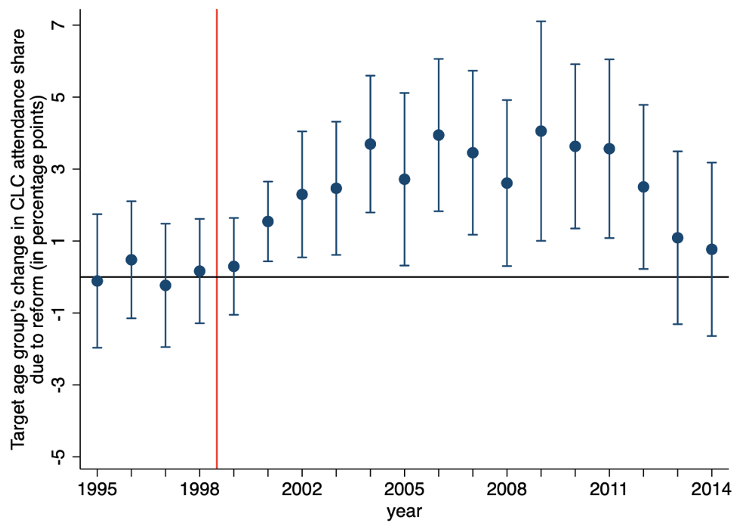 Notes: The figure plots the point estimates and 95% confidence intervals. Effects are relative to the baseline year 1999, which is indicated by the vertical line. Sources: Federal Institute for Research on Building, Urban Affairs and Spatial Development (BBSR), CLC statistics, Federal Bureau of Statistics, authors’ own calculations.

To isolate the share of persons who participate voluntarily in adult education, we exploit variation in the population share of persons eligible for the early retirement programme at the county level. Figure 3 reveals that the participation share in work-related courses rose more strongly in counties in which more men were eligible to retire early than in counties with fewer eligible men. For example, compared to the baseline year 1999, we find that a one-percentage point higher population share of men aged 55 to 64 is associated with a significant two percentage-points increase the CLC share of persons aged 50 to 64 in work-related courses. The effect size increased over time as more eligible individuals entered early retirement. In general, the participation pattern in Figure 3 roughly mimics the number of men in the early retirement programme from Figure 1. It does so with a lag of two to three years, which is what the average programme duration would suggest.

To conclude, our study supports the notion of active older people who are willing to engage in adult education. This is an important result because it highlights their potential to learn new skills and to adapt to new technologies. Moreover, it implies the feasibility of longer working lives, which is crucial for mitigating skills shortages and reducing the pressure on the pension insurance system in many countries.

Stephan L. Thomsen is a professor of economics at the Leibniz University Hannover, Germany. He is also a research fellow at IZA Bonn and research associate at ZEW Mannheim. His research focuses on applied econometrics and (micro-)econometric evaluations. He contributes to questions on labour and educational economics, primarily in the area of the evaluation of political reforms, human capital, migration, and social security. For more information, visit his website.

Jens Ruhose is an assistant professor of economics at Kiel University, Germany. He is also a research affiliate at IZA Bonn and CESifo Munich. His main research interests are migration, labour, and education economics. In recent years, he has made various contributions studying the selection of migrants. For more information, visit his website or follow him on Twitter.

Insa Weilage is a PhD student at the Leibniz University Hannover, Germany. Her research focuses on labour markets and the economics of (adult) education. For more on her work, visit her website.