The real wage of non-college workers in the U.S. has grown by about 20 per cent since the 1980s, which is less than half of the growth in aggregate labour productivity. This is rather puzzling because low-skill workers tend to work in sectors that have higher productivity growth, yet their wages are lagging behind those of high-skill workers and aggregate labour productivity. The slow growth of low-skill wages is also important for the average wage growth as non-college workers represent two-thirds of employment since the 1980s. International data suggest more evidence on the stagnation in low-skill wages. While starting years vary, low-skill wage stagnation is observed in some other OECD countries after 1980. Recent research shows that there has been little pay progression for the less educated workers in the UK.

Our research offers a novel perspective on low-skill wage stagnation, which also links it to growing inequality and wage-productivity divergence. Our explanation rests on labour reallocation driven by uneven productivity growth across sectors. When we take a deeper look into the low-skill labour market using U.S. data, we observe that real wage, i.e., nominal wages deflated by the aggregate consumption price index, grows similarly across workers in different sectors (left panel of Figure 1). The growth rate of the wage with which workers enjoy consumption does not depend on what they produce in the economy. However, looking at the growth rate of their product wages, i.e., nominal wages deflated by the sectoral price of the output they produce, we see a quite dispersed pattern reflecting large changes in relative prices. Sectors with rising relative prices are those with slower growth in low-skill product wages. The product wage would be the exact measure of the marginal product of labour—the increase in output after employing one more unit of labour— in a perfectly competitive labour market. This observation can contribute to stagnation in aggregate low-skill real wage because low-skill workers are reallocating into sectors with slower growth in product wages (right panel of Figure 1). 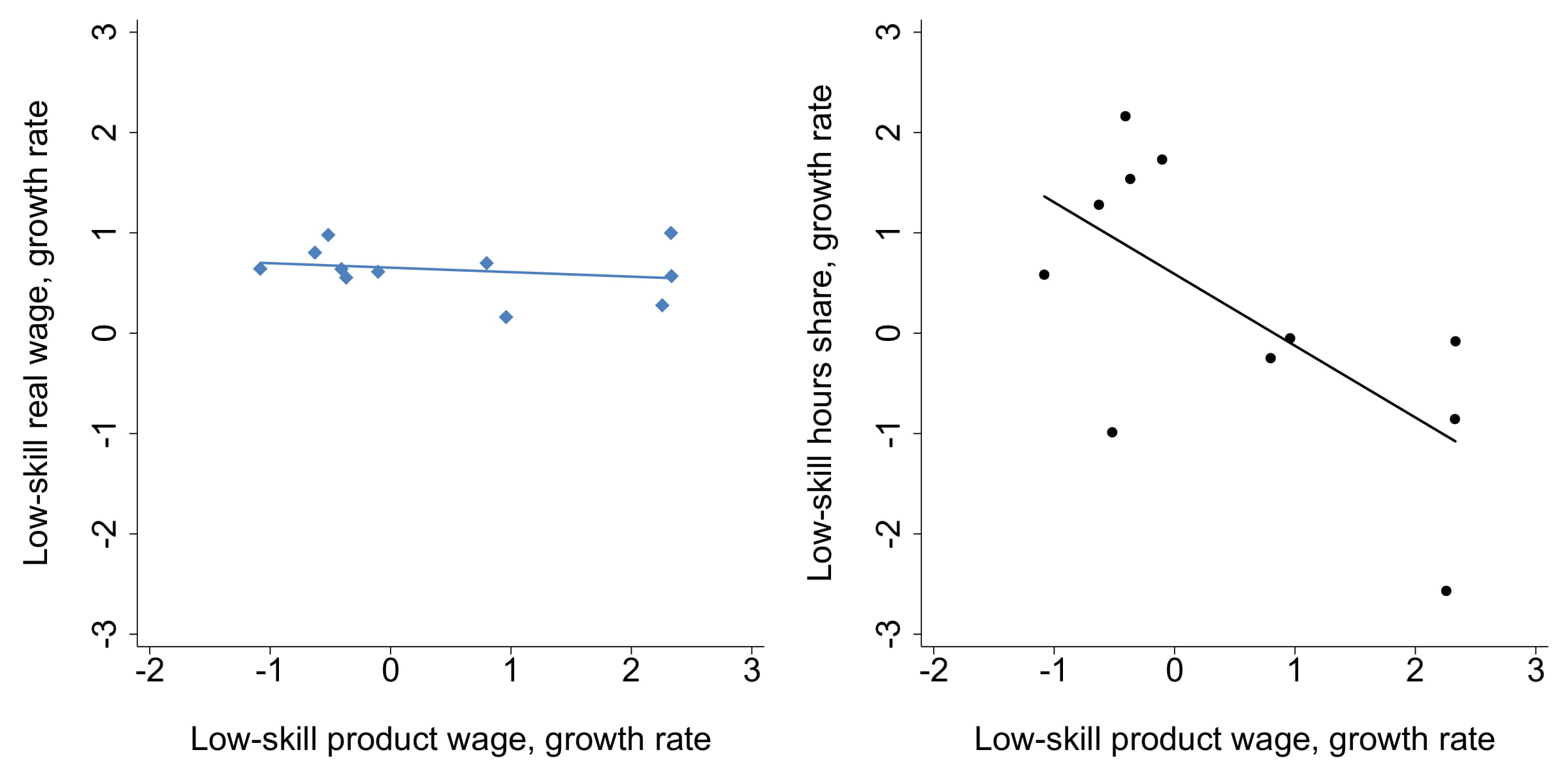 Notes: Growth rates for the period 1980-2010. Wage growth controls for the changing demographic and occupational structure.

How important is the mechanism highlighted in Figure 1 for low-skill wage stagnation? The aggregate low-skill real wage can be expressed as a weighted average of sectoral product wages, where the weight of a sector is a product of its relative price and the share of low-skill hours employed in the sector. Figure 1 implies that the weights are increasing for sectors with rising relative prices. Strikingly, Figure 2 shows that low-skill real wage growth would be more than double if these weights were fixed at the 1980 levels. These facts are also confirmed with the U.S. state-level data. 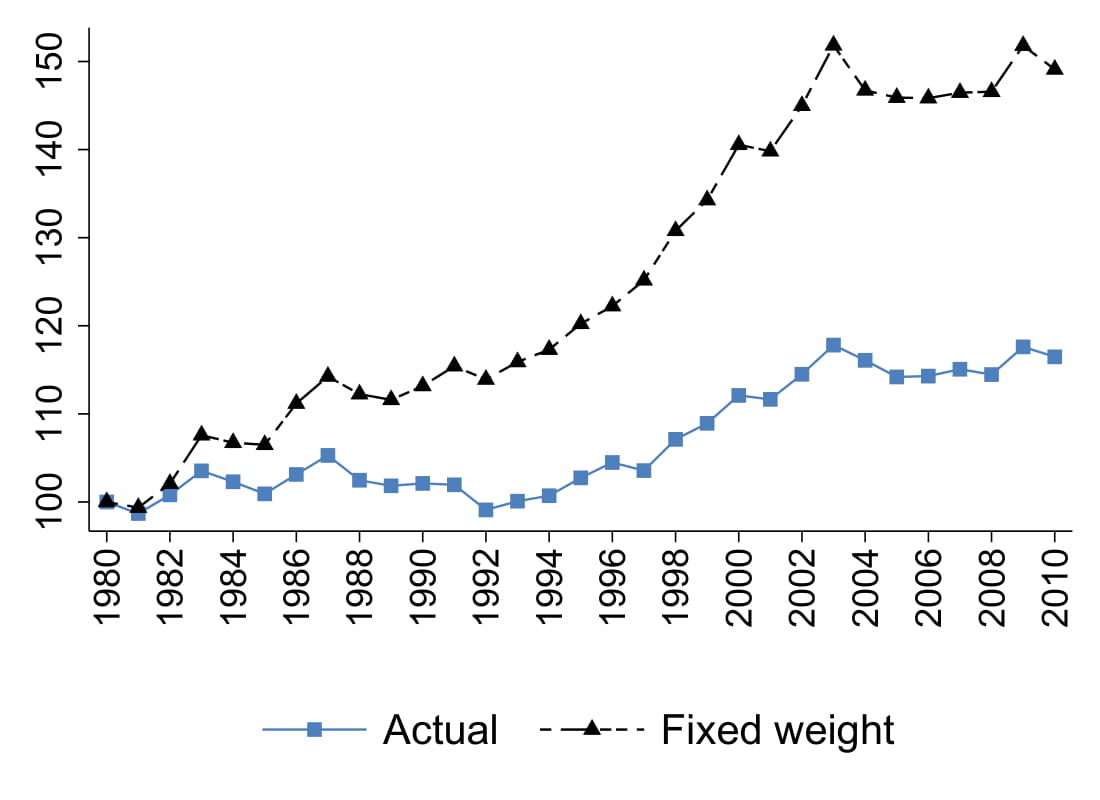 Notes: Wages normalised to 100 in 1980.  Wage growth controls for the changing demographic and occupational structure.

Our explanation builds on the observation that high-skill services, e.g. health and education, are getting relatively more expensive over time and yet they are gaining a bigger share of the economy. Low-skill workers are concentrated in sectors with faster productivity growth, but they do not benefit as much because their output is getting cheaper over time and complement high-skill labour.

We can make the model more realistic with two additions: the introduction of capital and allowing for changing production weights in the production function. These enable us to track the quantitative importance of our mechanism against other sources of skill-biased demand shifts, such as capital-skill complementarity and automation that displace low-skill workers.

Taking our model to the U.S. data, we observe that empirically, the divergence between productivity and low-skill wage between 1980 and 2010 is largely accounted for by increasing wage inequality (70 per cent) and to a lower extent by falling labour share (20 per cent), and increasing relative cost of living (10 per cent).

Our mechanism can account for 68 per cent of the rise in wage inequality and the entire rise in the relative cost of living. It is also an essential element in explaining low-skill wage stagnation as it can generate sector-specific trends in the product wages of low-skill workers observed in the data.

Our results suggest that faster productivity growth in sectors that use low-skill workers intensively can worsen labour market prospects for low-skill workers. However, there is room for policy to change this. First, boosting the supply of high-skill workers through education policy can reduce wage inequality as well as decreasing the employment share of the group that is most severely affected. Second, supporting productivity growth in the high-skill sectors can slowdown the growth of their relative prices, which mitigates the adverse consequences of the reallocation.

Rachel Ngai is an associate professor in the department of economics at LSE and a member of Centre for Macroeconomics (CFM). She is also a research fellow at the Centre for Economic Policy Research (CEPR). Her research interests span the theory of economic growth, labour markets and housing markets, with focus on the structural transformation, inequality across skill and gender, time allocation, and fluctuations in the housing market.

Orhun Sevinc is an economist at the Republic of Turkey’s central bank and a member of the Centre for Macroeconomics (CFM). He obtained his PhD from LSE’s economics department in 2017. His main research interests are in macro and labour economics with a particular focus on the changing structure of employment and wages. His current research studies how technological change affects wage inequalities and reallocation of employment across sectors and occupations.