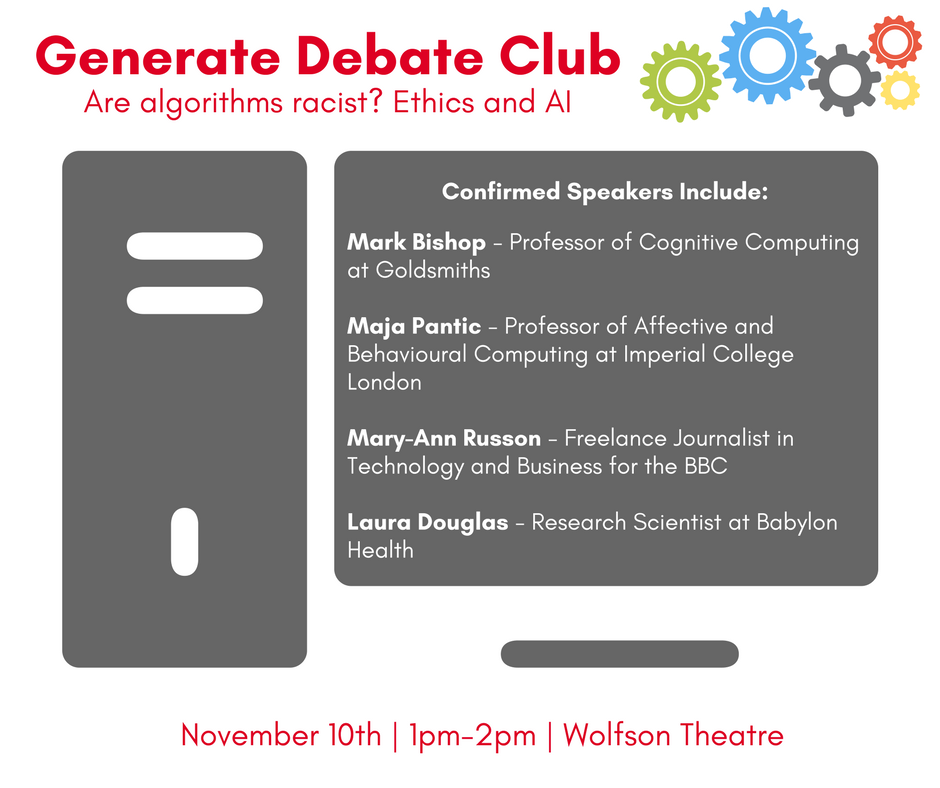 This week’s panel focuses on the potential issues that arise if revolutionising artificial intelligence tools exhibit gender and racial biases.

We will discuss the dangers of existing social inequalities and prejudices being replicated in new ways as an increasing number of decisions affecting our everyday lives are left to automatons – but also the ways in which algorithms present an opportunity to address bias and counteract it where appropriate.

Dr J. Mark Bishop is Director of TCIDA (The Centre for Intelligent Data Analytics) and Professor of Cognitive Computing at Goldsmiths, University of London. At TCIDA Mark has led a team that have successfully developed commercial state-of-art analytic systems for procurement (e.g. SpendInsight – a system he co-developed with colleagues at the University of Reading and @UK plc – famously being deployed by the UK National Audit Office to highlight potential savings in the UK National Health Budget of over £500m per annum). Mark has also led research using web-analytics for fraud detection and steered basic research into the theoretical foundations of analytics for procurement which has led to notable advances in state-of-art address parsing, restructuring, deduplication and matching. In 2010 Mark was elected to Chair the AISB. The AISB – the UK Society for Artificial Intelligence & the Simulation of Behaviour – is the world’s oldest society for the study of Artificial Intelligence and Mark served a four-year term as Chair.

Maja Pantic obtained her PhD degree in computer science in 2001 from Delft University of Technology, the Netherlands. Until 2005, she was an Assistant/ Associate Professor at Delft University of Technology. In 2006, she joined the Imperial College London, Department of Computing, UK, where she is Professor of Affective & Behavioural Computing and the Head of the iBUG group, working on machine analysis of human non-verbal behaviour. From November 2006, she also holds an appointment as the Professor of Affective & Behavioural Computing at the University of Twente, the Netherlands.

Prof. Pantic is one of the world’s leading experts in the research on machine understanding of human behaviour including vision-based detection, tracking, and analysis of human behavioural cues like facial expressions and body gestures, and multimodal analysis of human behaviours like laughter, social signals, and affective states. In 2011, Prof. Pantic received BCS Roger Needham Award, awarded annually to a UK based researcher for a distinguished research contribution in computer science within ten years of their PhD. She is an IEEE Fellow and an IAPR Fellow.

Mary-Ann Russon is currently a full-time freelance technology and business journalist for the BBC. Previously, she worked as Senior Technology Reporter for the International Business Times UK. Her work recently earned her a nomination for Digital Writer of the Year at The Drum Online Media Awards 2016 and she was shortlisted for Technology Journalist of the Year at the UK Tech Awards 2016. Mary-Ann currently focuses on consumer technology — futuristic technologies like drones, 3D printing and robotics (artificial intelligence/machine learning); IT and mobile security; medical and scientific technology breakthroughs; aerospace and defence; quantum computing; retro tech; quirky, unusual geek stories; technology and its intersection with politics, crime and human rights; archaeology and anthropology; with a little bit of outer space thrown in too (yes, it’s a wide remit). Mary-Ann was formerly Deputy Editor of Mobile Europe and has written for The Economist, European Communications, Computerworld UK, Techworld.com, PC Advisor, Macworld UK, Digital Arts, iPad & iPhone User, TotalFilm, NEO Magazine and the Bournemouth Daily Echo in the UK. In Singapore, she was Editor of Asian MobileNews and wrote for The Straits Times, TODAY, and FiRST – Asia’s Premier Movie Magazine.

Laura is a Research Scientist at Babylon health. Her current research uses Probabilistic Inference and Bayesian Networks to model the diagnostic process of a GP. Previously, she has researched ways to predict patient outcomes for a health tech start-up in Singapore, and built state of the art Natural Language Processing tools for another London based start-up. She holds an MSc in Machine Learning from UCL and a Masters (Part III) in Maths from the University of Cambridge.

Rachel Power recently joined London School of Economics, working across both the Department of Management and LSE Careers as a Careers Consultant. Prior to LSE Rachel worked at Imperial College, delivering professional development programmes and support for students within the Department of Mathematics, Bioengineering and Medicine. Engaging with organisations including Google DeepMind, Spotify, and IBM she developed an interest in AI and machine learning.

In addition to her role at LSE Rachel is also a psychotherapist at Tavistock Relationships. Her training and work in this area had reinforced a fascination with consciousness and cognition.

If you’re an LSE Student follow this link to attend: https://careers.lse.ac.uk/students/events/detail/464445

If you are not from LSE and would like to attend email careers.generate@lse.ac.uk with your name.

Bad Behavior has blocked 711 access attempts in the last 7 days.