Leaders with science training have not outperformed other leaders in terms of their countries’ coronavirus responses, write Joachim Wehner (LSE) and Mark Hallerberg (Hertie School).

When the coronavirus struck in 2020, some countries with seemingly world-leading levels of pandemic preparedness turned into COVID-19 disaster zones. During March 2020, British prime minister Boris Johnson boasted about shaking hands with everybody, attended a rugby match and hosted a “baby shower” just two days before advising the public to stop non-essential contact. In the United States and Brazil, national leaders railed against lockdowns while COVID infections and deaths accelerated. Aghast at these failures of leadership, some argued that female leaders, non-populists and those trained as scientists do better than males, populists, and non-scientists. For many, German chancellor Angela Merkel personified these hypotheses. As a female non-populist scientist, she was said to exude “the calm confidence expected of a former research scientist with a doctorate in quantum chemistry”.

Understanding why and how countries responded to the pandemic is crucial if we are to learn the lessons and save more lives next time. Multiple factors likely played a role. Yet crucial decisions by national leaders at the outbreak of the crisis have shaped the trajectory of the disease. Some leaders responded quickly while others dithered or denied, contributing to avoidable deaths. It is natural that this raises questions about systematic patterns in leadership characteristics that can help to account for such differences. Striking anecdotes can give clues and inspire hypotheses – but we should be careful not to generalise from a handful of high-profile examples. Sample selection bias can lead to the wrong conclusions.

Concerning gender, Garikipati and Kambhampati (2021) pointed to gender differences in attitudes to risk and leadership style to argue that compared with men, women leaders lock down earlier because they are more “risk-averse with respect to lives” and have “a clear, empathetic, interpersonal, and decisive communication style.” On populism, the argument is that non-populists are more likely to listen to expert advice and acknowledge scientific facts, and hence act earlier than populists with their “fatal inability to face reality”.

The final cited attribute is a leader’s academic training. Why such background might matter requires more explanation. In a crisis requiring speedy decisions, relevant expertise may enable a leader immediately to grasp the problem. More broadly, a leader’s educational background may be linked to personality types. Leaders who studied a natural science or medicine are more likely to understand the pandemic, and to respond more quickly. On the other hand, leaders may not require specific expertise if they have highly trained advisors. However, leaders choose their advisors, and they can fire or ignore experts with whom they disagree.

On the scientific attributes of leaders, we have studied whether those with natural science or medical backgrounds locked down more quickly following the outbreak of COVID. We also tested whether gender and populism played a role. Our study included all United Nations member countries with identifiable leaders in January 2020 and coded whether they were led by a man or a woman. We identified ‘populists’ based on the list by Kyle and Meyer (2020). In addition, using the International Standard Classification of Education developed by the United Nations Educational, Scientific and Cultural Organization (1997), we collected detailed education data for 185 leaders.

Of the 169 leaders of countries for which we have COVID-19 response data, 13 had a natural science or medical education, 13 were women, and 17 were populists. Figure 1 shows the six most popular areas of study of leaders, to which we have added the less popular life and physical sciences. Only 15 leaders (8% of the total) listed in Table 1 qualify as ‘scientists’ for the purpose of our analysis. These leaders are connected with a range of pandemic responses. Apart from Angela Merkel, the only other leader who studied a natural science and completed a doctorate in chemistry is President John Magufuli of Tanzania, who denied the existence of COVID – and later died, officially of “heart complications” and amid rumours he had caught the virus. Among medical doctors, the Irish Taoiseach Leo Varadkar was praised for his hands-on involvement in the early stages of the pandemic, while the Turkmen President Gurbanguly Berdimuhamedow declared his country free of COVID and recommended liquorice as a cure. 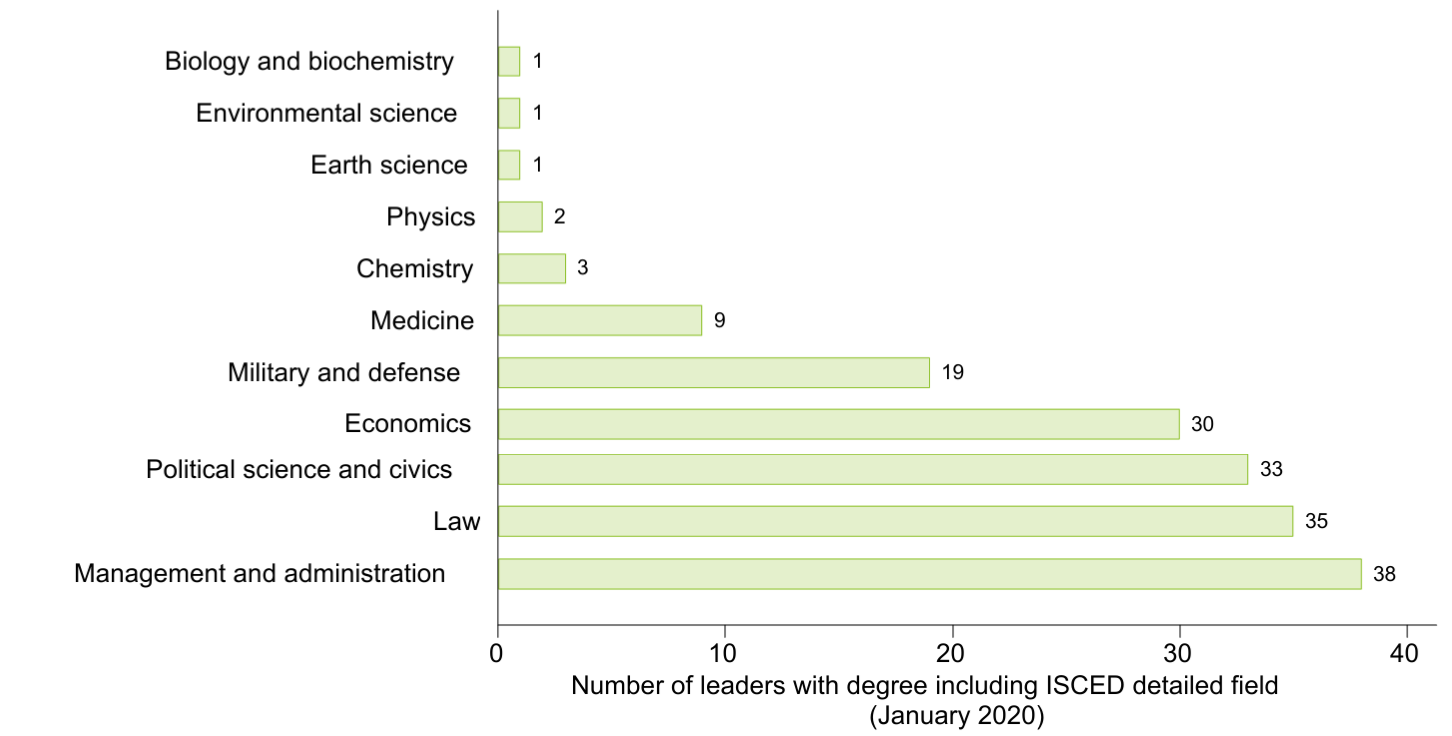 Our key outcome of interest is the speed of lockdown, which had direct consequences for subsequent mortality rates. By one estimate, the UK government could have saved 20,000 lives by locking down just one week earlier. Our first measure of lockdown is the number of days from the start of 2020 to the initial nationwide stay-at-home recommendation or order, according to the Oxford COVID Government Response Tracker dataset. Our second measure of lockdown is based on the broader Oxford stringency index, which also captures other containment and closure policies, such as school closures, restrictions on internal movement or international travel controls. While an examination of the number of days since 1 January 2020 is a rather blunt measure, alternatives such as the date of lockdown after the first case within a country’s borders, or after a given threshold of cases or deaths, would rely heavily on (honest) reporting and international comparability.

Figure 2 reports Kaplan-Meier survivor functions that relate leader traits to the probability of a nationwide stay-at-home measure during the 2020 calendar year. It mattered little whether countries were led by a scientist, a woman or a populist. Even when other variables are factored in, including GDP per capita, pandemic preparedness, level of democracy or whether any COVID deaths had been reported, we find no systematic support for the hypotheses that either scientists, women or non-populists were any quicker in locking down.
One possible explanation for these negative results is that our data is too inexact, or too plagued with measurement errors. Yet the Oxford COVID-19 Government Response Tracker is widely used, and our paper reports statistically meaningful and plausible relationships with some control variables. 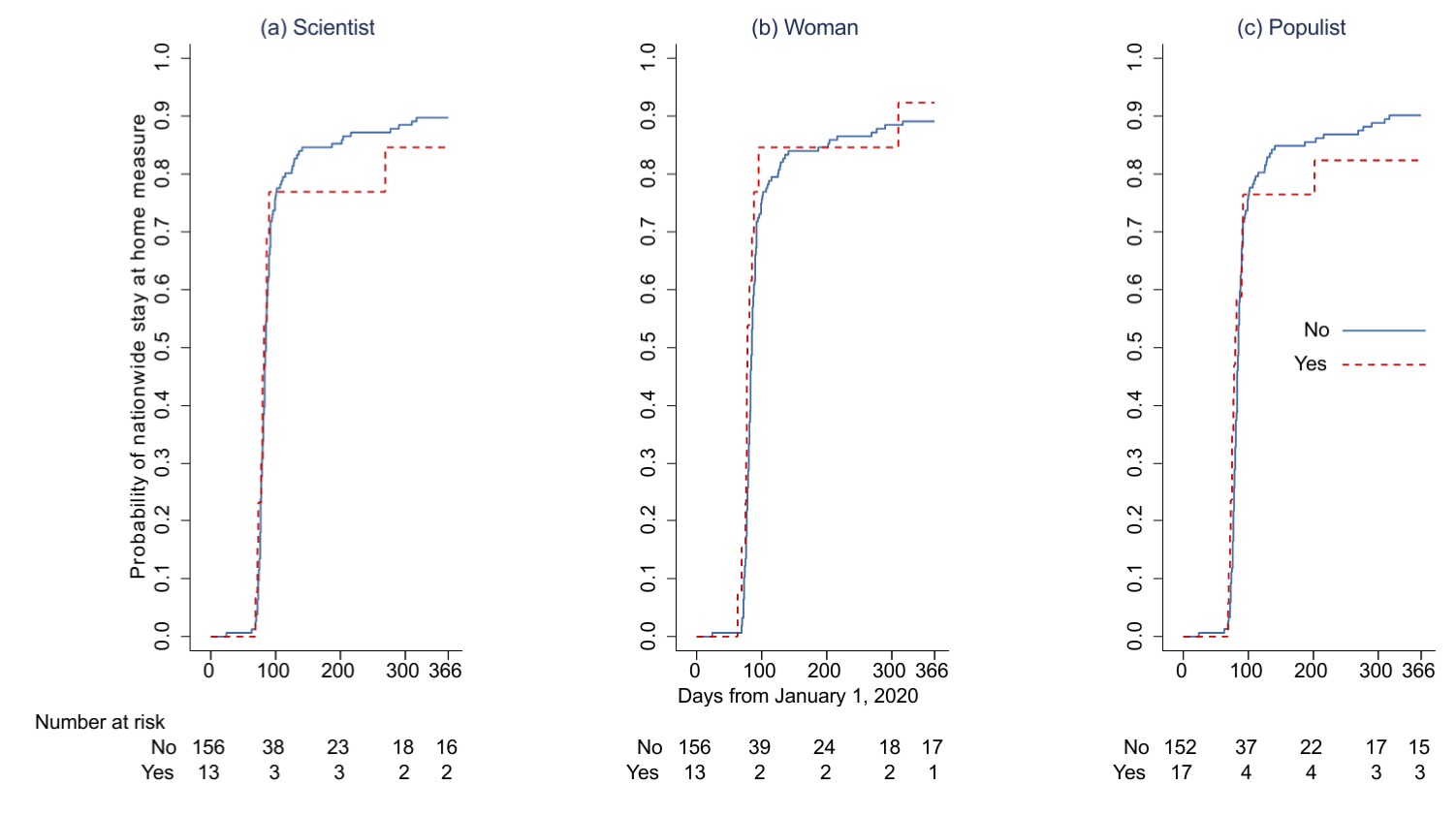 A second explanation would be that we are dealing with observational data that might be riddled with endogeneity problems. Countries differ in ways that may be correlated with the traits of their leaders and their policy responses, giving rise to omitted variable bias. Yet our findings are consistent even in a regression framework with controls, which provides some reassurance. Moreover, some features of our dataset rule out other potential sources of bias. As the leaders themselves were appointed prior to the pandemic, reciprocal causation is not a concern. And we counter sample selection bias by achieving 90% coverage of the eligible population (169 out of 188 UN members with identifiable leaders).

A third explanation would be that the lockdown date is a very incomplete measure of what governments did to fight the pandemic. The Oxford COVID-19 Government Response Tracker includes other elements of the response, such as contact tracing and tests. Yet we looked at their broader stringency index and also found null results.

Rather, we think our results are a cautionary tale about generalisations about how certain leadership traits translated into different policy responses during the pandemic. A non-populist female politician with a doctorate in a natural science may have initiated an early lockdown, as was the case in Germany. But there does not appear to be a systematic relationship between these traits and the date of lockdown.

Table 1: Leaders with a degree including a natural science or medicine (‘scientists’)

This post represents the views of the authors and not those of the COVID-19 blog, nor LSE. It also appears at Bruegel and is based on Wehner, Joachim, and Mark Hallerberg. 2021. “Pandemic Leadership: Did “scientists” lock down more quickly?” SocArXiv. April 21. 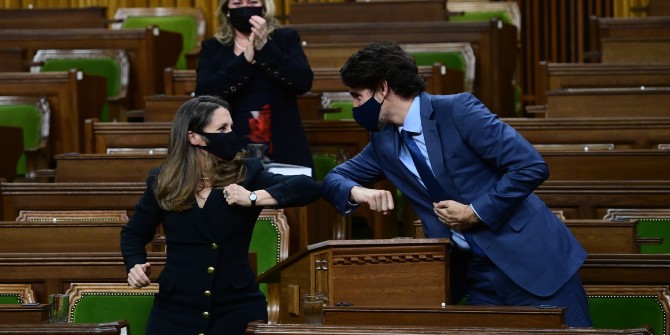 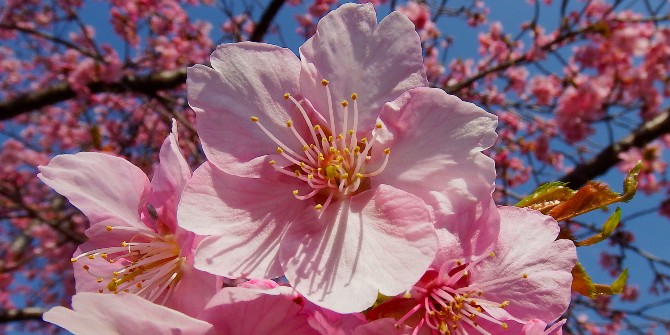