Sadiq Khan has committed to developing a new measure of good growth in London. Ben Rogers (University of London/ LSE Cities) sets out what the London Mayor will have to do to make sure that it is more than a communications exercise.

With London’s mayoral election behind us, we can now expect Sadiq Khan and his team to turn to their attention to delivering on his electoral platform. If we are honest, Khan’s manifesto was not buzzing with new commitments. For the most part, he ran on a promise to build on existing mayoral policies and priorities – not surprising, perhaps, given that he was the incumbent, has limited powers and even more limited budgets. The pandemic has broken Transport for London funding and he now has a truncated three-year term, because the election was delayed by the pandemic.

But the manifesto did include some new commitments, including one to develop a fresh approach to assessing growth.

Now is also the right time to look afresh at how we measure our success as a city. For years, we’ve measured prosperity — like most cities and countries — in terms of material wealth that is generated by our economic activity. But the strength, sustainability and wellbeing of our economy and society are not currently properly reflected. So I’ll work with others to establish a new measure of wellbeing in London as the core indicator of our city’s success as a place to work and live for all its residents.

Of course, Khan is not the first politician to suggest that the way we think about growth is flawed. For decades, critics have been arguing that we need to find richer, more multi-dimensional frameworks, and their arguments have only got stronger, as the costs – in terms of ecological destruction, inequality and health – of a narrow-minded focus on economic production have mounted.

London is an object lesson in the limits of the orthodox approach. The capital has grown impressively, on GDP, GVA (gross valued added) and job-growth measures, though per capita GVA has stalled over the last decade. But its record on carbon emissions, pollution  and other environmental metrics, poverty, inequality and wellbeing have been much less impressive, as Centre for London’s recent London at a Crossroads report set out.  And the pandemic has exposed big issues with the capital’s resilience. We know that a story that omits these dimensions is deeply misleading.

Yet a critic might well wonder if we really need a new measure to capture this. There are already dozens and dozens of alternative metrics to choose from. The European Union has published a document identifying 14 indicator frameworks well adapted to measuring the sustainability of European cities – and that was 5 years ago. We could now add others to the list, including the Donut City Portraits framework, not to mention metrics more focused on health and wellbeing, poverty and inequality or citizenship and governance.

Even within the UK there is no shortage of city focused measures. PwC and Demos publish an annual Good Growth for Cities assessment and Centre for Cities a yearly City Metric (albeit with a narrower economic focus). The Centre for Thriving Places in Bristol have developed a couple of city based measures. Turning to London, the Mayor’s Sustainable Development Commission has its own scorecard. Trust for London’s London Poverty Profile covers deprivation. And UCL’s Global Prosperity Institute has worked with citizens in East London to develop a Prosperity Index. One could go on.

The sheer number of these measures begs the question: if they are so powerful, why do we need so many? Why do we have to keep re-inventing them? There are, moreover, some well-established criticisms of public sector measurement and performance frameworks that might explain why none of these ‘good growth’ measures seems to have stuck. To begin with, it’s argued that such frameworks tend to present themselves as objective and authoritative, when they are in fact deeply political – there is no objective way of measuring pollution or inequality, or determining how we should weigh them against each other. And that means they are always contestable.

Critics maintain that metrics that favour ‘softer’ non-numerical measures of development lack rigour, while those that deal in numerical ones are easily dismissed as shallow. And there is a familiar criticism that the use of measurement regimes to assess organisational and individual performance can have distorting and demotivating effects – those working under such regimes too often have to face a choice between doing well on a measure even if that means neglecting other objectives, or failing to hit a target (see Kitchin, Lauriault & McArdle (2015) and Da Cruz (2016) for two helpful discussions).

There is a lot in these arguments, but it’s probably better to take them as cautionary tales than fatal objections. No doubt we have too many feebly conceived, half-baked measurement frameworks, some used principally as branding exercises. And not doubt careful thought has to go into how you develop and use a measurement regime. But there is lot in the old saying ‘What gets measured gets valued’. And public organisations need some sort of framework to guide their work and understand how well they are doing.

In that spirit, here are some rules for the Mayor of London’s proposed new ‘good growth’ metric.

This post represents the views of the author and not those of the COVID-19 blog, nor LSE. It is based on Ben Rogers’ contribution to Getting London Growing Again?, an open seminar hosted by LSE Regional and Urban Planning Studies.

Ben Rogers is Professor of Practice – London at the University of London, and Senior Visiting Fellow at LSE Cities. Twitter @Ben_rog 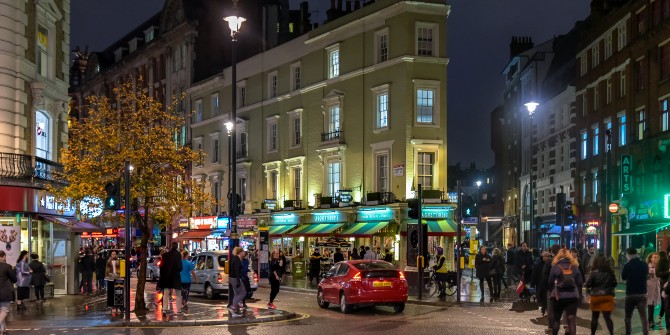