During 2020, residents of the West Nile sub-region of North West Uganda resisted government-imposed lockdowns and quarantine centres. As an alternative, traditional leaders and elders proposed local techniques for controlling disease outbreaks. Clement Aluma, Innocent Anguyo, Elizabeth Storer and Georgina Pearson (LSE) evaluate these claims, placing resistance in the context of state-distrust and histories of managing infectious diseases. The authors argue for a recognition of the multiple discourses through which political resistance unfolds at state borderlands.

The Ugandan government response to COVID-19 was one of the most stringent on the continent. At the onset of the pandemic, the Ugandan government, through its COVID-19 Taskforce, attempted to locate multiple quarantine centres in West Nile’s urban centres, including Arua and Moyo. On several occasions across these districts, communities living in the vicinity of the proposed centres resisted such a move, protesting and in some cases mounting resistance — including using bows and arrows – in Arua.

By May 2020, the first quarantine centre set up at Arua School of Comprehensive Nursing was at capacity with suspected cases. Accordingly, there was a need to designate more centres throughout the region. That same month, communities living in the villages surrounding Arua Prison Primary School rejected a proposal to set up a COVID quarantine centre at the school. Community members organised and demanded a meeting with the district COVID Taskforce. At the meeting, community members expressed fears that the proposed centre was in an area of high population density and lacked “proper fencing”. People denied audience to the district chairman, who tried in vain to explain that the centre was only meant for suspected rather than confirmed cases. They were concerned that suspected cases could escape into the community, and that if used as a quarantine centre, the school would not be able to house pupils due to take exams.

A common refrain circulating during Lockdown 1, in early 2020, was whether people of West Nile would die first of hunger or of COVID

Resistance to the scheme involved evading admission to quarantine centres. As late as August 2020, health workers in Yumbe district reported widespread resistance from communities regarding the management of COVID cases. The parents and relatives of suspected cases resisted giving up suspected cases to the centres, instead facing enforcement from community services. In some cases, relatives threatened to take health workers to court. In part, this was because of continued perceptions, particularly among young people, that COVID was a common flu. It is also because people preferred to be treated by medicines obtained at trusted private pharmaceutical retailers or remedies from herbalists. In Bidi Bidi refugee settlement in Yumbe district, many of the people quarantined at centres reportedly escaped.

This resistance occurred in a context where lockdowns were widely criticised by regional leaders, as well as West Nilers. The region is one of the poorest in Uganda, and the implementation of nationwide lockdowns had a significant impact on the livelihoods of the subregion’s traders and agriculturalists. A common refrain circulating during Lockdown 1, in early 2020, was whether people of West Nile would die first of hunger or of COVID. Ugandan and international observers drew connections between the stringency of measures and attempts by the ruling party to subdue political dissent. Consequently, public health measures were widely regarded by Aruans as having potent political uses.

Lockdowns have brought challenges for the majority of West Nilers, whose livelihoods depend on movement either within the country or across the border to trade, or on movement to rural farms to produce goods. Given pre-existing high rates of cash poverty in the region, with many families lacking financial safety nets in times of crisis, the lockdowns were interpreted as a threat that rivalled the health threat of the virus.

In a context where the government lacks legitimacy, lockdowns have been interpreted by many, particularly young people, as acts of political manipulation. It was notable too that whilst citizen movement was restricted, cargo (plus the police and the army), continued to be transported along national roads. This led to the belief that the lockdown was being manipulated by the elite at the expense of the poor. Publicised violations by local government officials have further tarnished the legitimacy of government public health plans. Such recognitions found expressions in popular rumours that COVID was a hoax, or that it did not affect young people, but those who were elderly and vulnerable.

In many ways, these patterns echo those widely reported during the first months of the West African Ebola epidemic. Here too, quarantine centres were seen as centres of contagion, and relatives often opted for home care, away from the purview of foreign health workers and an often-militarised response.

While the resistance rallied by cultural institutions was in part an act of political resistance in the face of restrictions widely deemed to be inappropriate, it was simultaneously an attempt to revive indigenous knowledge and practices of containing disease. Maintaining health among West Nilers has long been a plural enterprise, and responses to crisis are no exception. Healthcare remains thoroughly plural. Indigenous healers, including elders, herbalists and diviners (now nominally Christian), all maintain an important stake in diagnostic processes. While these specialists all hold legitimacy for particular types of illness in everyday care (e.g. herbalists for poisoning or skin lesions, and female spiritual diviners for mental illness, possession or bewitching), in moments of crisis people often draw on specialists according to symptoms, as well as options within their geographical and financial reach. Ideas of indigenous lockdowns gained traction as a surface for political resistance, since such approaches are embedded in West Nile’s everyday colonial and post-independence history.

It is no coincidence that indigenous lockdowns were valorised by elders, who have long retained moral, social and spiritual standing within borderland society

It is also unsurprising that indigenous approaches were raised by elders, who have long held significant positions as arbiters of healing. In the region, many types of sickness are regarded as both physical and moral. For example, elders continue to discipline through curses. As a 2018 paper highlights, even today many types of illness are linked to atrita (curses). When basic clinical consultations fail, diagnosis is often pursued through tracing a history of family conduct; a process led by elders. In part because of legacies of maintaining order in a rural society away from the violent and coercive arms of the colonial/ postcolonial state, elders’ words retain power in contexts of diagnosing sickness.

The calls for an “indigenous” lockdown which emerged in north-west Uganda amidst the restrictions of the pandemic were a political response to nationwide restrictions. Yet, taking these calls seriously, we have exposed a dynamic terrain of locally-situated responses to outbreak threats. Such approaches responded to colonial disease threats, and have been continually adapted throughout the post-independence period. Increasingly, responses have incorporated aspects of biomedical practice.

We deploy “indigenous” since it was a vernacular term deployed by Lugbara people during COVID. We recognise that attempts to contain diseases, often instigated by elders and so-called “traditional” authorities, have drawn upon available biomedical and other forms of knowledge, and have been fundamentally shaped by external changes including statebuilding, violent upheavals and associated population movements. Rather than present untouched examples of “traditional wisdom”, we trace the endurance of grassroots strategies to limit the spread of epidemic diseases, but simultaneously recognise these to be continually in flux. In addition, we understand that efforts devised to protect the health of the population may compromise the rights of individuals understood to be “sick” and may function through stigmatisation of people deemed to be carriers of disease.

We have noted that indigenous lockdowns function within a patriarchal, gerontocratic framework of society. Since outbreaks — notably HIV/AIDS — have been perceived as moral crises, outbreak control has often reasserted masculine control. Equally, quarantines have long compromised the rights of the sick for the protection of the wider community. Thus, while it is important to explore emergent political protests of communities during crisis, it is essential to understand these calls as expressions of power-holding groups. It is no coincidence that indigenous lockdowns were valorised by elders who have long retained moral, social and spiritual standing within borderland society. For these groups, advocating for improvised approaches, rather than one-size-fits all, has benefits which are not equally shared among marginalised members of the populace.

Healthcare is often experienced by West Nilers in “emergency mode” — with particular health priorities elevated among routine diagnosis and care. This happened with sleeping sickness and the MSF response in the 1980s; HIV/AIDS, with widespread awareness and testing driven by INGOs, NGOs and the Ugandan government entering the region from the late 1990s (and antiretroviral treatment being administered from 2002; the 2016 Hepatitis B response, led by the Ugandan government; the 2018-9 Ebola response; and in the 2020 COVID response. While these threats provoke panic in the general population, provisions to contain, treat and prevent epidemics and pandemics rarely builds capacity in the wider regional, district, or village health system. Local calls for indigenous lockdowns represented an anti-state protest, and a call to preserve economic well-being alongside containing a particular disease threat. In multiple ways, this represented a holistic call for well-being beyond the funding of a contemporary emergency threat.

This post represents the views of the authors and not those of the COVID-19 blog, nor LSE. It is an edited extract from Indigenous lockdowns: A historical exploration of epidemic containment in Arua District, West Nile sub-region, Uganda, a working paper from the research project Living the Everyday: Health-seeking at Uganda’s borders.

Clement Aluma is a journalist working in West Nile.

Innocent Anguyo is  an independent research consultant and former journalist working across Uganda.

Georgina Pearson is an LSE Fellow in the Department of International Development at LSE.

Posted In: #LSEThinks | Democracy and rights | Inequality and social infrastructure 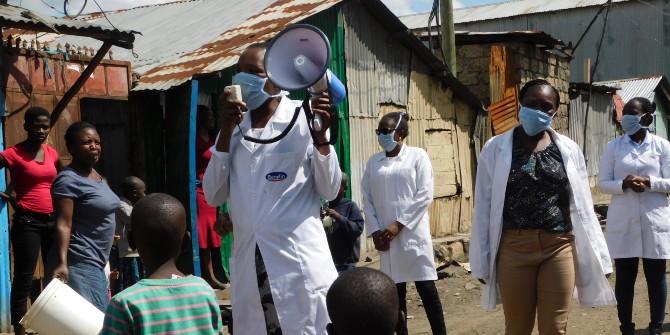