This review was originally posted on Literary Review. You can view the original article here. 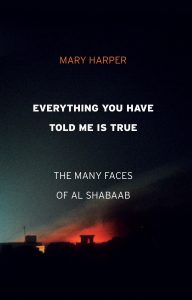 Somalia’s Al Shabaab is the most resilient militant Islamist insurgency after the Afghan Taliban. It has proved nimble and adaptable as well as tenacious. It has recovered from blunders, infighting and huge human losses, and remains a formidable presence in Somalia and neighbouring Kenya despite – or perhaps because of – the vast resources devoted to destroying it.

Al Shabaab has a remarkable intelligence apparatus. The title of this book alludes to a phone call that Mary Harper, a BBC journalist and longtime reporter on Somalia, received following a visit to Baidoa in the southwest of the country. The caller was a member of Al Shabaab, who described precisely where she had gone, whom she had met and what she had done in that town, and also in Mogadishu, down to the tube of Pringles she was holding when coming out of a shop. After her itinerary was read back to her, Harper told the caller that everything he had told her was true. She writes, ‘it is ironic that Al Shabaab has been able to describe to me so accurately what I do and whom I see when I visit Somalia while I have found it almost impossible to establish a single certifiable truth about the group.’

Harper is humble and scrupulous. She describes – to be exact, she allows her Somali interlocutors to describe – the different and paradoxical faces of Al Shabaab. It is appallingly brutal and it is everywhere. One of the most telling and disturbing stories in the book recounts how a young woman, niece of the interior minister in the transitional government, spent a dull afternoon at home watching television with her cousin. She then went upstairs into her uncle’s room, where he was resting, and detonated a suicide vest, killing them both. The numerous people whom Harper has interviewed tell stories about Al Shabaab’s ruthless treatment of its recruits, about the women deployed to kill off captured and wounded soldiers, and about the targeting of the country’s cultural elite, including poets and journalists.

Al Shabaab runs an efficient system of justice and taxation. Its courts deliver swift and impartial justice according to the rules of sharia law, which are well understood by everyone. Even in Mogadishu, where Western donors (led by the UK) advertise the progress they have made in state-building, residents prefer to seek out Al Shabaab courts rather than try their luck with the slow and corrupt judicial system. Al Shabaab continues to collect taxes in the city – more scrupulously and consistently than the recognised government does. And Somali businessmen prefer to route their lorries along roads controlled by the militants, knowing that the toll receipts they are given at the first Al Shabaab checkpoint will be honoured throughout its territory, in contrast to the routes under government control, where payments will be extracted at every single roadblock, regardless of the driver’s protestations.

Al Shabaab is tenacious. It withstood the onslaught of the most effective armies in East Africa and the targeted killing of a succession of its leaders in US air strikes. It lost most of its territory to African Union troops and, along with that, its major sources of income, but it survived as a mobile guerrilla force with a continuing ability to overrun the bases of peacekeepers and strike in the heart of Nairobi.

In the last two years, the USA has hugely escalated its war against Al Shabaab. According to the New York Times, in 2018 there were forty-seven disclosed airstrikes, resulting in 326 deaths. At the same time, the CIA ran a parallel campaign of airstrikes, about which no information has been made public. In 2019, the Pentagon has ramped things up further. In the first two months of this year alone there were twenty-four disclosed airstrikes, with 225 fatalities.

However, as Amanda Sperber has revealed in The Nation, pretty much everything that we are told by the USA about their purported progress in ‘degrading’ Al Shabaab isn’t true. The Department of Defense makes the patently absurd claims that all those who are killed are Al Shabaab combatants and that there are no civilian deaths. The USA has no apparent political strategy beyond killing, as if there were a finite number of terrorists who could be killed one by one, thereby delivering victory. Britain’s flagship state-building project in Africa, in partnership with the United Nations and the European Union, is similarly a faith-based enterprise rather than an evidence-based one.

Harper does not come to conclusions. She does not tell us what to think or what might ‘work’ in solving Somalia’s vast problems. She doesn’t toy with the metrics of success or failure that have so beguiled, and misled, the state-builders and counterterrorist experts. This is not only refreshing; it is also important, and a striking contrast to every other book recently published on Somalia. She compels the reader to reflect on how little we know. Harper has written the best book in print on Africa’s most significant extremist organisation.