This blog provides a summary of the policy memo, ‘The Interactions between State Budget and Political Budget in Syria‘ published by the Conflict Research Programme.

A new policy memo published by Conflict Research Programme shows that the Syrian regime has increasingly used state budgets as a tool to reallocate resources for the benefit of warlords and crony capitalists during the conflict. This abuse of public spending is one of the different ways in which the regime can replenish its ‘political budget’, which refers to the funds available by the ruler for discretionary spending to their elites to ensure their loyalty (de Waal, 2016).

The dynamics of the state budget can help illuminate a two-level game in Syrian politics. The first level represents the regime-populace bargain — a sort of social contract between the authority and the citizens under which the latter have traded political rights and freedom for economic benefits and public goods. The second level is the ongoing intra-elite political game in which the ruling group bargains with elites over how much access to resources they can have in return for their support. These two ‘levels’ share an inverse relationship: when the allocated amount for public goods and services increases, the elites’ access to government spending decreases, and vice versa. The conflict in Syria, and the resulting lack of financial resources accompanied with the regime’s total reliance on coercive measures to sustain its authority has led it to adopt state budgets that prioritise the regime-elite bargain over the regime-populace one. In other words, elites’ access to government spending has increased whereas the allocated amount for public goods and services has largely decreased.

Elites, including traditional cronies and newly-emerged warlords, who made their fortunes initially from conflict-related activities, access state budgets in two interlinked ways. The first is through the corrupt relations between state officials and businesspeople. This usually involves relatively small amounts paid to evade tax, accelerate government procedures, etc., and is illegal by law. The second form is the legal access of business elites to public resources, where the Syrian authorities have approved and facilitated this access. For instance, these elites have monopolised the supply of basic goods within government-controlled areas, in return for payments from the state budget. They have managed to use their shadow companies outside Syria to overcome the impact of sanctions while importing some of these goods to Syria. Due to their excessive margins of profit, payments to these companies consume a large part of public spending. In return, the elites have had to show loyalty to the Syrian regime by providing financial, political and even military support, when needed.

The supply of oil and oil derivatives is one example of how the government spending has become a source for financing the political budget in regime-controlled areas. The Syrian authority has met its oil and fuel needs from different sources. For example, the Syrian authority has depended on influential economic networks to obtain both imported oil and oil transported from north east Syria. These networks have coordinated and negotiated with businesspeople and key persons in north east Syria to transport oil to the regime- controlled areas. They also have used their shadow companies outside Syria to secure the needed oil to the Syrian government from external markets. It is worth mentioning that during the conflict, shadow companies have proliferated, primarily to help the regime avoid sanctions post-2011.

The government has legalised the use of oil and oil derivatives trade to finance the political budget by signing formal contracts with private companies and businesspeople. These contracts often include high profit margins for the elites. For example, the Syrian authority is paying an additional amount of 0.22 US dollar for each litre of fuel compared to the market prices of fuel in neighbouring countries. With fuel consumption of 5.5 million litres per day, this additional amount has been estimated at around 400 million US dollars per year, which is almost equal to the total salaries of 1.5 million public workers in Syria. This shows how funding the political budget in Syria directly contributes to amplifying the economic gap between the elites and the majority of Syrians. For their part, elites pay high commissions for licit and illicit international economic networks which they use to circumvent sanctions.

Hussam Katerji is an archetypal example of the warlords who are benefiting from state budgets through legal contracts with the government. He is a Parliament member in Damascus and owns the  Katerji Group which is involved in transporting oil from north east Syria to the oil refineries in regime-controlled areas (Cornish, 2019). The Group also has a shadow company in Lebanon which imports oil and fuel, mainly from Iran (Ibid). Moreover, Katerji is one of the few beneficiaries of the privatisation of public services and entities in Syria. For instance, early last year, President Assad approved the establishment of two private oil refineries that were owned by one of the Katerji companies, noting that in regime-controlled areas, there are only two public sector oil refineries.

In return, Katerji has had to prove his loyalty to the regime by providing political, financial, and military support, when requested. The Katerji brothers have established their own militia in the Deir-Ezzour governorate under the claim of protecting their investment in the area; yet, this militia has been managed under the supervision of the regime security agencies (Winter, 2019). They have also maintained good connections and financial relations with tribal leaders to facilitate their oil-related businesses and, politically, to keep these leaders under the regime’s influence (Ibid). Moreover, the Syrian authority uses Katerji brothers as one of the intermediaries for its oil trade with Iran. At the same time, Iran is satisfied with their activities as long as they channel some of the public funds to Iran for its political spending. This also shows the increasing role of the external allies such as Iran, in the regime’s selection process of its elites.

During the conflict, business elites have had increasing legal access to state budgets through government procurement and contracts. This has further depleted already shrinking public resources and has amplified the influence of cronies and warlords at the expense of the majority of Syrians. In return, the regime has expected these elites to play a vital role in sustaining its authority by providing political, financial, and military support when needed. However, the constantly escalating cost of maintaining support from the elites has decreased the regime’s bargaining power with Syrians inside the country. To compensate for this weaker bargaining position, the regime has moved towards greater use of coercion. Thus, within the current Syrian context, the continued allocation of more resources for the benefit of political elites will further diminish the possibility of establishing a fair and inclusive social contract.

DE WAAL, A. 2016. Introduction to the Political Marketplace for Policymakers. The Justice and Security Research Programme, Policy Brief 1.

Zaki Mehchy is a Researcher at LSE working in the CRP - Syria Team, a Senior Consulting Fellow at Chatham House, and Co-founder of the Syrian Center for Policy Research. His work focuses on development policies. He has conducted research on socio-economic impact of the crisis in Syria, poverty and multi-dimensional deprivation, labor force, local governance, and community empowerment. In 2002, Zaki obtained a Diploma in International Economic Relations from Damascus University. He has MSc in International Economics from the University of Essex. 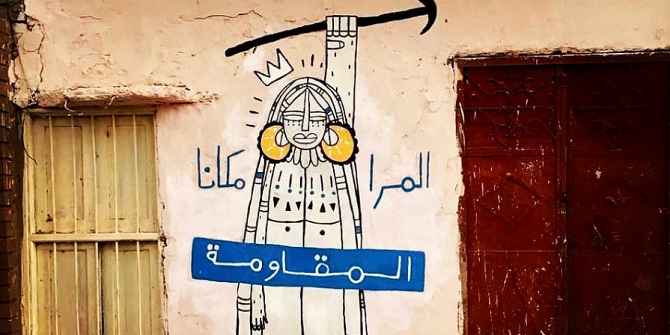